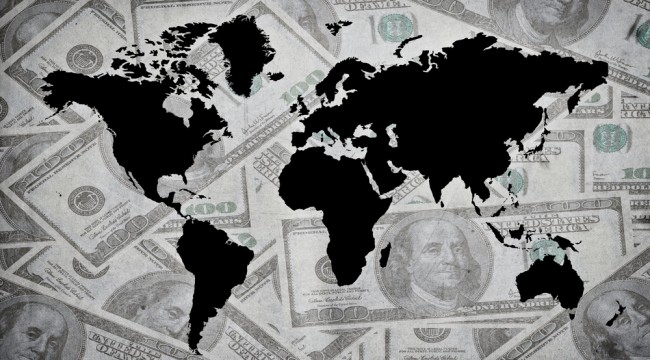 The Dollar in Crisis

The conditions that gave rise to a dollar crisis in 1971 are emerging again in 2016, but with a different kind of international monetary system.

Since 1980, the world has been on a de facto “dollar standard” in place of the former gold standard. In accordance with the basic insight of Triffin’s Dilemma, the U.S. has still had to run large, persistent trade deficits to keep the world well-supplied with dollars in order to finance global growth, trade and investment.

The U.S. achieved this worldwide dollar supply by making the dollar a reliable store of value and by making U.S. Treasury debt the largest and most liquid market in the world. Trading partners no longer considered it necessary to convert dollars to gold (either at a fixed price or a market price). They were comfortable building up huge portfolios of Treasury debt.

At their heights, the reserve position of China exceeded $4 trillion, while the reserve positions of Japan and Taiwan were approximately $1 trillion each. Oil exporters such as Abu Dhabi and Norway had sovereign wealth funds with assets in excess of $1 trillion each. The overwhelming majority of this vast wealth was invested in U.S. dollar-denominated assets, and most of that took the form of U.S. Treasury debt.

This was Triffin’s Dilemma on steroids.

If these trends persisted, eventually the U.S. would go broke (as it had in 1971). But until then it seemed as if the game could go on indefinitely, and everybody was a winner.

The breakdown started in 2010 when President Obama declared a currency war. The idea was to cheapen the U.S. dollar in order to give the U.S. economy a boost in the aftermath of the financial crisis of 2008, and the severe recession of 2007–09.

Part of the rationale for the new currency war was that the U.S. is the world’s largest economy and the U.S. needed help. If the U.S. economy sinks, it takes the world with it. Conversely, if the U.S. economy can achieve self-sustaining growth, it can act like an engine to pull the rest of the world out of its slump. A rapid devaluation of the dollar was meant to boost growth in the U.S. and indirectly boost world growth.

The effects of the new currency war were immediate and dramatic. The dollar fell 14% in just over a year, from mid-2010 to late-2011, as shown in this chart: 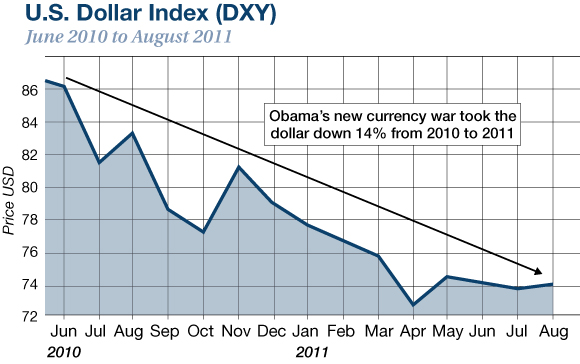 As is usually the case when academic economists get involved in policy roles, the White House theory turned out completely different in reality. The U.S. did not achieve significant progress toward self-sustaining growth as a result of a cheaper dollar. And the rest of the world suffered slower growth (China, Japan and Korea) and a sovereign debt crisis (Greece, Spain, Portugal and Ireland).

The currency war weapon had misfired. The world was not better off. But there was an important piece of collateral damage. Suddenly confidence in the dollar began to wane.

The carefully constructed “dollar standard” that had been engineered by Volcker and Reagan and then continued by James Baker and Robert Rubin as Treasury secretaries (under presidents Bush 41 and Clinton) started to fail.

The world was looking for an alternative to the dollar since the U.S. was no longer committed to upholding the dollar’s value.

The second blow to the dollar standard came from Ben Bernanke and the Federal Reserve. After Japanese and European growth were hurt by the weak dollar in 2011, Bernanke decided to engineer a strong dollar beginning in 2012. The thinking was that the U.S. economy was robust enough to bear a strong currency, while Japan and Europe would benefit from a weaker yuan and weaker euro.

Then it was Europe’s turn. Mario Draghi, head of the European Central Bank, famously said on July 26, 2012, that he would do “whatever it takes” to support the euro. He followed up in June 2014 with negative interest rates, and then followed up again in January 2015 with euro QE.

The Fed assisted the process of weakening the yen and the euro by tightening monetary policy in the U.S., beginning in May 2013. This tightening came mostly in the form of forward guidance and the manipulation of market expectations, but it was effective nonetheless.

In May 2013, Bernanke suggested the end of quantitative easing in his famous “taper talk” speech. In December 2013, the Fed began the actual taper by reducing purchases of long-term assets such as 10-year Treasury notes. By November 2014, the taper was complete. In March 2015, Bernanke’s successor, Janet Yellen, ended forward guidance by removing the word “patient” from the FOMC statements. Finally, in December 2015, the Fed achieved “liftoff” by actually raising rates 0.25%.

All of these moves were steps in the continuous process of tightening U.S. monetary policy.

By January 2016, the weak euro, weak yen, strong dollar and Fed tightening were all in place. There was only one problem. The Fed, as usual, had grossly miscalculated the underlying strength of the U.S. economy.

Now, in late 2016, the dollar shortage has started to morph into a debt crisis and potential liquidity crisis. For the second time in 50 years, Triffin’s dilemma has come into play.

The world was fine as long as the U.S. supplied dollars through its monetary and fiscal policies. But, as soon as the U.S. exercised discipline with tighter monetary or fiscal policy, the dollar shortage hit home and the world began to contract.

The solution to Triffin’s Dilemma in 1971 was to devalue the dollar against gold. But today, the world is no longer on a gold standard. Where can the money come from to bring liquidity back to the world during a new global liquidity crisis?