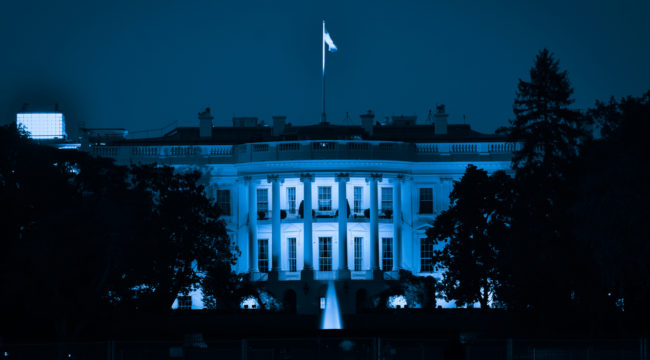 Over the last couple of years I’ve been all over TV… from Fox News to CNBC, CNN and Bloomberg. I’ve been telling our fellow Americans that the financial global elite was planning to issue their own globalist currency called special drawing rights, or SDRs.

And that those elites would use this new currency to replace the U.S. dollar as the global reserve currency.

I’ve even written about this extensively in my best-selling booksThe Road to Ruin and The New Case for Gold.

I’m sure some people in the mainstream media thought I was out of line — but the United Nations and the International Monetary Fund (IMF) have both confirmed this plan to replace the U.S. dollar is real. I’ve made this warning many times, but it seems to be falling on deaf ears. That’s why I’m writing directly to you.

Here’s the proof that the U.S. dollar is under attack, right in front of our eyes:

The UN said we need “a new global reserve system… that no longer relies on the United States dollar as the single major reserve currency.”

And the IMF admitted they want to make “the special drawing right (SDR) the principal reserve asset in the [International Monetary System].”

More recently, the IMF advanced their plan by helping private institutions, such as the UK’s Standard Chartered Bank, issue bonds in SDRs.

Although our mainstream media ignored this major event, the UK media reported:

This is all happening. And on January 1st, 2018, this trend to replace the U.S. dollar will accelerate. That’s when the global elite will implement a major change to the plumbing of our financial system.

It’s a brand-new worldwide banking system called Distributed Ledger Technology. And it will have a huge impact on seniors who are now preparing for retirement.

When this system goes live, many nations will be able to dump the U.S. dollar for SDRs.

For now, the U.S. dollar is still the world’s reserve currency. Other nations have to hold and use the U.S. dollar for international trade, instead of their own currencies.

This creates a virtually unlimited demand for U.S. dollars, which allows us to print trillions of dollars each year to pay for wars, debt and anything we want. It keeps our country operating.

Now, we can see that the global elites are working to unseat the U.S. dollar as the global reserve currency.

Here are the three key pieces of information that prove this will happen.

Fact #2 — The IMF has confirmed they want to replace the U.S. dollar with SDRs.

Fact #3 — The IMF has confirmed Distributed Ledgers can be used for “currency substitution”… and they’ve even set up a special task force to speed up implementation.

The IMF is using this technology to create an SDR payment system, because that’s the currency they issue. 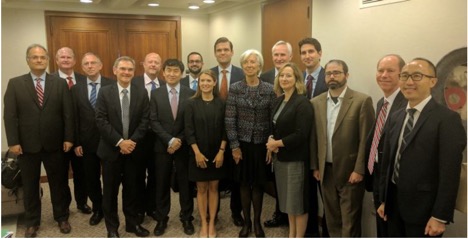 As you know, Christine Lagarde, head of the IMF, is the woman in the middle.

When asked about the task force, she said:

“As I see it, all this amounts to a brave new world for the financial sector.”

Yes, a brave new world where the dollar is no longer the world reserve currency.

Barbara C. Matthews, a former US Treasury Department attaché to the European Union, has reached the same conclusion.

She said the link between the globalists’ currency and Distributed Ledgers “is impossible to avoid.”

And that “the IMF seems to be exploring the possibility of permitting a broader use of [their globalist currency] beyond internal transactions among member central banks.”

Make no mistake, if the IMF is planning to use Distributed Ledgers to replace the U.S. dollar with SDRs. And just to be clear, when SDRs take over, the American people will be left with devalued dollars.

And that means our government — your government — will no longer be able to finance its normal operations, including welfare programs like Social Security. For those who have their retirement account parked in stocks, they could watch it evaporate in a matter of days. The weakest companies in the stock market could collapse once this plan goes live.

Just look what happened the last time we had a big change in our global financial system. In 1971, Nixon announced the U.S. would no longer officially trade dollars for gold. That created a lot of uncertainties, turning that decade into a nightmare for stock investors.

Take a look… the Dow Jones, an index of “stable” blue chip stocks (the kind most retirees like to hold), was cut in half. Stock investors bailed out of the market and, for the most part, didn’t come back for a decade. 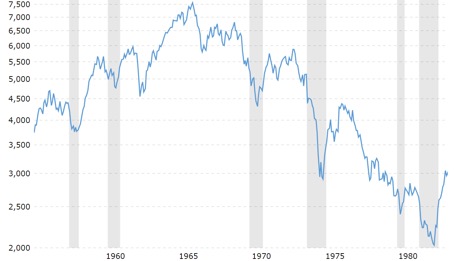 I expect something similar once Distributed Ledgers go live.

The transition from a U.S. dollar system to a new system dominated by SDRs will be messy. Stocks will collapse… and will stay down. There will be no recovery this time, because the U.S. government won’t be able to come to the rescue like they did in 2008.

You won’t even have funding for normal operations, let alone enough funds to save stock investors.

I know that governments have been patiently watching Distributed Ledger (often referred to as blockchain) technology develop and grow outside their control for the past eight years. Libertarian supporters of Distributed Ledgers celebrate this lack of government control.

Yet, their celebration is premature, and their belief in the sustainability of powerful systems outside government control is naïve. Governments don’t like competition especially when it comes to money.

You probably know that you, or any government, cannot stop Distributed Ledger technology — in fact you probably don’t want to. Governments and monetary elites want to control it using powers of regulation, taxation, and investigation.

This new law will not only provide a regulatory scheme for state regulators, but will also be a platform for litigation by private plaintiffs and class action lawyers seeking recourse against real or imagined abuses by digital coin exchanges and facilities.

We know the U.S. government will want to use this technology for its benefit. One step toward government control just occurred a few weeks ago.

On August 1, 2017, the SEC announced “Guidance on Regulation of Initial Coin Offerings,” the first step toward requiring fundraising through Distributed Ledger, or blockchain-based tokens to register with the government.

But consider the following additional developments:

Perhaps most portentously, the International Monetary Fund (IMF) has weighed in.

In a special report dated June 2017, the IMF had this to say about Distributed Ledgers: The IMF favors control by a “pre-selected group of participants” or “one organization,” rather than allowing “anyone” to participate.

This paper should be viewed as the first step in the IMF’s plan to migrate its existing form of world money, the SDR, onto a DLT platform controlled by the IMF.

They’re telling you exactly what their plan is. It would be foolish to ignore them, or assume the U.S. dollar will remain the global reserve currency much longer once this plan is implemented, as early as January 1, 2018.

You know the global elites’ aren’t your biggest fan. You know the U.S. dollar has been under attack.

This is the global financial elites’ plan to remove the U.S. dollar from its position of power and to attack your administration all at once.

Who do you think American’s will blame when the stock market crashes, or Social Security runs out? We can hear the talking heads already.