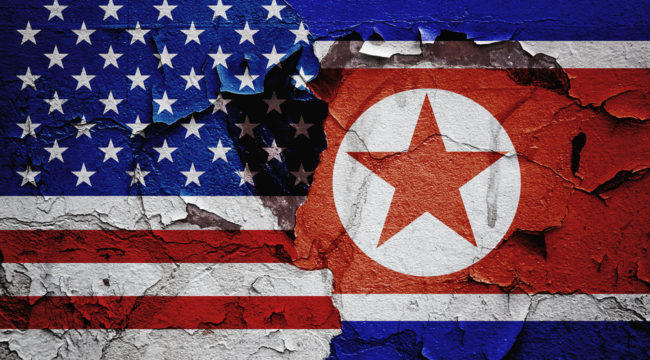 [Ed. Note: Jim Rickards’ latest New York Times bestseller, The Road to Ruin: The Global Elites’ Secret Plan for the Next Financial Crisis, is out now. Learn how to get your free copy – HERE. This vital book transcends rhetoric from the next phase of the Korean War to prepare you for what you should be watching now.]

The potential for war over the Korean Peninsula is as great as ever. The news cycle we live in is a world of 24-hour updates.  With what seems more like 24-minutes between when stories come and go it is easy to lose focus on the major stories.

The situation in North Korea is absolutely not going away. That’s really important for investors to recognize because this is going to come back again and again.

“Buying the dip” is a successful strategy — until it isn’t. Now that we have entered the escalatory phase in rhetoric and military preparation, markets have still not come to terms with reality.

In March of 2003 when the United States invaded Iraq, we could see that coming. The CIA Director, George Tenet was sending warnings, Secretary of State, Colin Powell was speaking at the United Nations and then President Bush declared Saddam Hussein a global threat.

While the CIA bungled the pre-war intelligence, the point is that the orders to invade Iraq were given a year before. The same story is playing out now.

While the President can always call off military action, the planning phases for an attack on North Korea are going on now. Orders have been given. Preparations have been made. It is fair to say that contingency plans have been in place since the late 1990s.

The North Korean issue was dumped in Donald Trump’s lap.  It is largely attributed to bad diplomacy and faulty leadership through the Clinton, Bush, and Obama administrations. There have been deals with North Korea put in place throughout the years that put hard sanctions on the regime.

We’ve been down this road before. Every time North Korea engages in dangerous behavior, the international community and the United States places pressure on them. It has worked where both sides have agreed to terms, but the North Koreans continuously break their promises and escalate programs.

For the eight years under the Obama administration nearly nothing was done and the issue was largely ignored.  It’s hard to point blame at Trump, and while he has dialed up the rhetoric, this has been going on for decades.

North Korea: The Logic of War

As tensions increase, there’s going to be rising stock market volatility. This is where the logic of war comes in. The French call it, La Logique de la Guerre. The logic of war is different than the logic of diplomacy. It refers to the dynamic of how wars begin despite the fact that the war itself will be horrendous, counterproductive, and possibly end in complete defeat.

Under the logic of war, there’s an escalatory logic that leads to war even when no one thinks it’s a good idea.

There is a theory that Kim Jong-Un is mentally unstable, but in many ways the situation is even more complex because he is extremely isolated and exists in his own dangerous bubble.

There are very few that have told the North Korean leader that he is going down the wrong path. Even if there are talks going on currently behind the scenes with the Russians and Chinese, he’s not someone who is getting much independent advice.

The United States has to come to a decision on whether it can live in that world where it can be threatened by North Korean nuclear weapons and missile programs.

If the US were to attack, it would not just hit weapon systems. The aim would be to have regime change and greater stability that replaces it.

For Kim Jong-Un looking at that outcome, it appears that he believes the United States is bluffing. North Korea is looking at the case in Syria a few years ago where a “red line” was given but no action was taken.

That’s why the logic of war is important. Kim Jong-Un is able to operate with a logic of his own. His logic pushes him away from verifiable cessation of the arms testing and into some version of normalization with relief of sanctions. It moves him away from diplomatic channels and in the direction of pushing his missile programs as far as he can.

That’s where a breakout happens. It is a dash for the finish line where a country aims for an objective without even pretending it is operating with peaceful purposes. Actions are taken regardless of negotiations or critical pressure.

In a breakout, there is an increase in the probability of attack but it drastically decreases the decision-making time and the window in which your enemy, in Kim Jong-Un’s perspective the United States, can actually attack you. That’s where the US is right now. He is in breakout mode. He’s testing his missiles at rapid pace. He’s testing his weapons and putting all the pieces together.

This decision has forced the United States to think hard about war and is providing very little time to act. It could be a matter of months before North Korea has this capability.

The worst case scenario is facing a submarine that can be maneuvered in the Pacific Ocean. While it might be able to be tracked, it allows for a threat to be closer to US territory and the missile range to be greatly diminished.

When that happens, that’s going to change the equation enormously. That’s going to be another shock to the stock market and add to more vulnerability there.

The United States then has two choices. It can acquiesce, allowing a nuclear armed North Korea to exist.

That would cause Japan and South Korea to weaponize nuclear technology which is unstable in itself and will increase the probabilities of war.

The second option is that the US will not acquiesce in this, and will go to war to put a stop it. The first Korean War fighting began in June 1950 and lasted until July 1953. There was no peace treaty but an agreement in an armistice where shooting stopped. The war was never technically over. It is a fight that could restart at any time.

The Next Phase of the Korean War — Who Wins?

My expectation is that it will restart but this will be the end of the first Korean War.

It is also worth recalling that Russia borders North Korea and has connected railroads and roadways to the region. What that means is that even if China were to cut off North Korea completely, they could still have weapons access from Russia.

In the best case scenario for the war there would be regime change and China would be given assurances that fighting would not be within range of the border at the Yalu River. Under a new regime any leader would have to be more stable than Kim Jong-un and acceptable to China.

The big winner in a regional conflict is Russia. In different ways the US, China, North Korea, and South Korea all lose. Russia is well positioned to sit on the sidelines during of destabilization of East Asia, while the U.S goes deeper in debt.

All of this will happen in stages but the stock market will eventually get a wakeup call that we are headed for war.

Investors looking to take action can make sure they have allocations of both cash and gold. One of the best solutions to this threat is to allocate 10% of your investable assets into physical gold or silver.

That will be your insurance when the time comes and allow you to gradually lighten up on stocks because they’re in for a rocky ride.