A Reaper drone of the United States Air Force sent this hellcat over the rainbow early Friday.

The late departed was no second-rater, no minion. Explains Matthew Hoh of the Center for International Policy:

The equivalent of the killing of Gen. Soleimani would be as if the Iranians assassinated Gen. Richard Clarke, the U.S. four-star general in charge of all U.S. special operations, but only if Gen. Clarke had the name recognition of Colin Powell and the competency of Dwight Eisenhower.

And so fresh geopolitical anxieties have riled the markets.

And a red flag ominously rises above the Jamkaran Mosque in Iran’s holiest city, Qom: 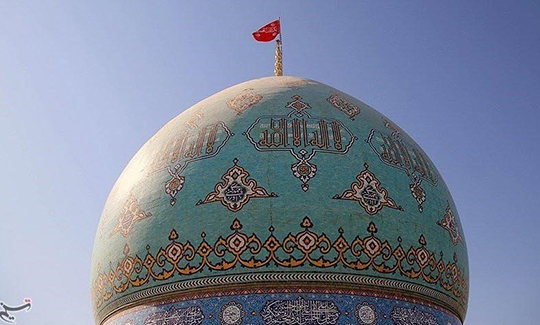 Our agents, far more familiar with such matters, tell us this flag nearly always flies blue.

But in ancient Iranian tradition — we are told — blue switches red when an enemy perpetrates a murder.

It stays red until the murder is repaid in identical coin, avenged.

Iranian state television has demanded the head of President Donald Trump. Whoever presents it is to collect an $80 million jackpot.

Meantime, Soleimani’s replacement — a certain Esmail Qaani — pledges to push America out of the Middle East.

And so the warhawks circle overhead… and blood drips from the moon.

“The region (and possibly the world) will be the battlefield,” intones Council on Foreign Relations President Richard Haass, his face taut with urgency.

Is it true? Is war next?

Answer shortly. But our beat is money. Let us first take the historical view of Friday’s murder… and the monetary view.

“The guinea and the gallows” were the true instruments of British imperial power.

The guinea represented the coined wealth of Great Britain.

The gallows represented its… constabulary zeal to put down and scotch irksome natives.

This is the 21st century of course — a time of enlightenment.

The British Empire is a distant and cobwebbed memory. As is the guinea. As are the gallows.

But their example lives on in the American Empire…

America’s imperial weapons are not the guinea and the gallows.

They are rather “the dollar and the drone.” They serve precisely identical functions.

Yes… the dollar and the drone are America’s nonhuman janissaries, its imperial enforcers.

Like the 19th-century pound (which replaced the guinea), today’s dollar is the world’s reserve currency.

Like the 19th-century pound, the dollar finances some two-thirds of global trade.

Britain hanged its overseas nuisances. America disintegrates its own: 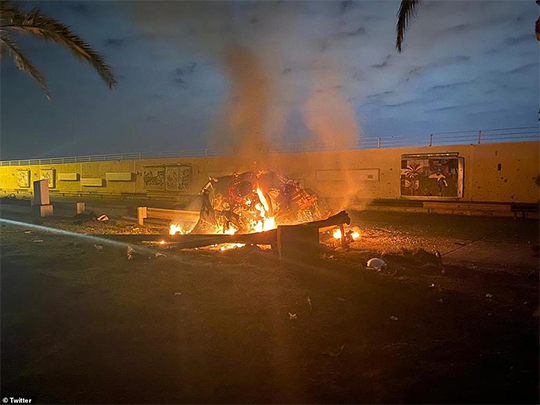 Here is civilization. Here is progress.

The sun eventually sank on the British Empire… the gallows came down… and the pound fell off its global perch.

The United States has its drones, as Mr. Soleimani’s ethereal form can presently attest.

But is America’s other weapon — the dollar — near to losing global reserve status?

The Global Counterattack Against the Dollar

The United States has employed its dollar to bludgeon its enemies. It is a weapon the president holds close.

As our colleague Dave Gonigam of The 5 Min. Forecast half-jestingly wonders:

“Is the Trump administration trying to kill off the U.S. dollar’s status as the globe’s reserve currency?”

And “for every action, there is an equal and opposite reaction,” says Jim Rickards:

The U.S. has been highly successful at pursuing financial warfare, including sanctions. But for every action, there is an equal and opposite reaction.

The “Axis of Gold”

Jim reminds us that Russia and China — among others — are hoarding gold to break their dollar shackles.

Thus they are forming an “axis of gold”:

This is the axis of gold.

This gold-based payments system will dilute and ultimately eliminate the impact of U.S. dollar-based sanctions.

Gold offers adversaries significant defenses against these dollar-based sanctions. Gold is physical, not digital, so it cannot be hacked or frozen. Gold is easy to transport by air to settle balance of payments or other transactions between nations.

Gold flows cannot be interdicted at SWIFT, the international payment system. Gold is fungible and untraceable (it is an element, atomic number 79), so its origin cannot be ascertained.

SWIFT (Society for Worldwide Interbank Financial Telecommunication) is a network that facilitates trillions of dollars in international money transfers each year.

Can we be surprised the Russias and Chinas and Turkeys and Irans of this world seek alternate sources?

The message, clear as a rifle shot on a still morning: The dollar’s days of “exorbitant privilege” are ending.

Of course… the dollar will not lose its throne tomorrow, next week, next year. But beware the trend, warns Jim:

In 2000, dollar assets were about 70% of global reserves. Today, the comparable figure is about 62%. If this trend continues, one could easily see the dollar fall below 50% in the not-too-distant future.

How does one go bankrupt?

That is how the dollar will likely lose its reserve status. Slowly at first… then all at once.

Will the Soleimani murdering plunge the United States into war with Iran?

Will There Be War?

But they will scatter. The doves of peace will chase them off…

The dueling parties will break a lance or two upon each other’s shields. But the swords stay in the sheaths.

The media are buzzing with stories about how Soleimani’s death will lead to a major war with Iran. The killing of Soleimani was a big deal and a clear win for the U.S. It’s true that Iran may well retaliate in some way, at least for the sake of its honor. But it’s unlikely to do anything that will invite a major U.S. response.

It will not turn into a full-scale war. Iran would lose and they know it. It will ratchet up the anti-American rhetoric for sure, but Iran does not have a lot of options.

They’ll fire a few missiles (we’ll fire back), shout threats and then that will be that. The real action will be in Iraq (will U.S. troops leave or not; I say no) and Israel (a target of opportunity and Iran’s real goal in the Middle East).

And so we conclude the hounds of war will stay on their leashes.

Do not forget: It is an election year…

War with Iran — and its skyshooting oil prices — would send these fiendish canines tearing into the economy. And onto Wall Street.

Who requires an intact economy… and an intact stock market… for reelection?

The president will therefore keep the war dogs tethered tight — at least until the election passes.

But we depart with caution…

The June 1914 assassination of Austrian Archduke Franz Ferdinand did not automatically fire off the guns of August. War was far from inevitable.

But blunders were made… and miscalculations. That is, human beings were at their normal follies.

And the guns roared for the next four years.

The dogs of war are willful creatures, ever hot to break free.

And this president is easily distracted.

If he isn’t watchful, they could just slip their leashes…