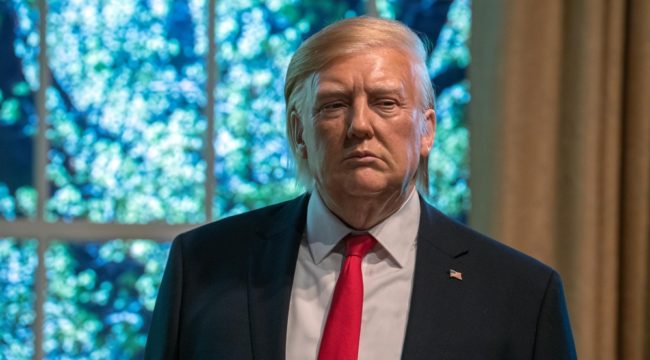 Will They Haul off Trump's Statue, Too?

This week, we are talking about the perishable nature of gods.

The city fathers of our hometown of Baltimore have let it be known that it was time to toss out the old deities. Reports the Associated Press:

After violence erupted in Charlottesville, Virginia over the weekend in response to the city’s plan to remove a Robert E. Lee statue from a park there, Mayor Catherine Pugh has renewed efforts to remove similar Confederate imagery from Baltimore. [… ]

On Monday, Pugh released a statement saying that it is her intention to remove all of Baltimore’s Confederate-era monuments – Confederate Soldiers and Sailors Monument on Mount Royal Avenue, the Confederate Women’s Monument on West University Parkway, the Roger B. Taney Monument on Mount Vernon Place, and the Robert E. Lee and Thomas. J. “Stonewall” Jackson Monument in the Wyman Park Dell.

The statues came down this week.

All across the country, the old gods become devils. New, gluten-free gods take their places. The statue of Taney (pronounced Tawney) will be particularly missed.

Roger Taney, like your correspondent, comes from the western shore of the Chesapeake Bay.

This is where the similarity ends.

Taney had a brilliant career; he took the high road to the top of the nation’s highest court. We never even took the bar exam…

The statue was less than a one-minute stroll from our office. Artfully done, it shows the Supreme Court jurist in his robes, bent forward in gloomy reflection.

The poor man had a lot to think about. Upon his shoulders fell the weight of contradictions over slavery.

America was supposed to be a free country. As chief justice of the Supreme Court, his main duty was to protect the freedom of its citizens against the power of the government. And yet a large part of the population was kept in chains, condoned and abetted by that very same government.

On a personal level, where he bent to his own bricks and tilled his own plants, he knew what to do. He freed his slaves and gave pensions to the older ones.

Taney said of slavery that it was “a blot on our national character.”

But the gods and myths misled him. In his chambers… wrestling with a complex legal issue by candlelight, the shadows confused him.

Before him was the plaintiff, Mr. Dred Scott, slave and lifelong resident of the United States of America, asking the highest court in the land to affirm that he had a right to life, liberty, and the pursuit of happiness… without being forced into a win-lose deal by his former slave master.

But instead of boring down to the bedrock of the issue, Taney let himself get distracted by the surface dirt.

The rights of the black slave, he seemed to think, were bound up with his race and limited by them — not by the Constitution of the United States of America. This from his decision:

They [slaves] had for more than a century before been regarded as beings of an inferior order, and altogether unfit to associate with the white race, either in social or political relations, and so far unfit that they had no rights which the white man was bound to respect…

Apart from the iceberg, the voyage of the Titanic was a great success. And apart from Dred Scott, Roger Taney had nothing to be ashamed of.

After he died, a few statues of him were put up. Now it is time to take them down, says Baltimore’s mayor.

We live in an age of miracles, of course.

Negative interest rates… money out of the air… the election of Donald J. Trump to the highest office in the land — things that we took for absurd a few years ago we now take for granted.

We take for granted, too, that our officials are miracle workers… and that we live among the gods themselves in an economy that never takes a breather… a stock market that only goes up… and something for nothing until Hell freezes over.

President Trump seemed to wonder how we could be so ungrateful. He used the occasion of his condemnation of the violence in Charlottesville to remind Americans how lucky they are:

We are renegotiating trade deals and making them good for the American worker. And it’s about time. Our economy is now strong. The stock market continues to hit record highs, unemployment is at a 16-year low, and businesses are more optimistic than ever before. Companies are moving back to the United States and bringing many thousands of jobs with them. We have already created over 1 million jobs since I took office.

But America’s president is sui generis… practically a walking miracle.

In the wake of Charlottesville, Ken Frazier, CEO of pharmaceutical giant Merck, resigned from the president’s American Manufacturing Council.

Frazier said his decision is “a matter of personal conscience” and “a stand against intolerance and extremism.”

Another president might have responded to the issues — his own connections to the alt-right, for example. Or the allegations against him of racism.

Not Mr. Trump. He understands better than his predecessors that in the land of myths and gods, logical argument is unnecessary. His response via Twitter:

Now that Ken Frazier of Merck Pharma has resigned from President’s Manufacturing Council, he will have more time to LOWER RIPOFF DRUG PRICES!

Ya gotta love him.

But taking credit for the economy and the stock market is a dangerous thing for the president to do. They are likely to blow up in his face.

In June, we entered the ninth year of economic expansion. Next month brings us to 99 months without a recession.

Typically, since World War II, a boom ends before it has gone on for 59 months. Only twice have they lasted for longer than the present one.

A recession cannot be far off. When it comes, the stock market will go down in sympathy.

Then, Mr. Trump’s statue might be hauled off, too, before it is ever put up.