Rewriting history, ignoring the risks and denying what actually caused the global financial crisis will only hurt policy discussions aimed at stabilizing the financial system.

The proposal for breaking up the big banks and revamping the Glass-Steagall Act has been back in the news lately. It also continues to be widely debated on Wall Street and in the media. These discussions, when based on facts, are what the financial media must continue to push for.

Glass-Steagall was a depression era safeguard that ensured a policy of stability. When it was formed, the White House worked cooperatively with the biggest bankers on Wall Street. In short, it ensured that banks would separate people’s bank deposits from speculative transactions.

That’s why when William Cohan pinned a piece titled, Bring Back Glass-Steagall? Goldman Sachs Would Love That it caused reason for alarm.

First, let’s give Cohan his credit. Gary Cohn has stepped down as COO at the vampire squid, Goldman Sachs, to bless the White House with his Wall Street expertise.

While leaving this career to become President Trump’s economic adviser might be noble, it came as a significant benefit to Goldman. The top Wall Street bank does hold a great deal of leverage in the instance that a modern Glass-Steagall Act was to be passed (As I wrote here, the bank has set itself up for it).

After reading the first lines of Cohan’s correct analysis toward Goldman, the remainder of his insights are where the wheels fall off the bus.

Unfortunately for readers of Cohan and the DealBook, this is much the same. In July 2015 when Sen. Warren and Sen. McCain positioned a bipartisan bill that would introduce legislation to revamp and reinstitute a modern Glass-Steagall Act, Cohan attempted to push it down.

She explains in detailed history that in 1998, Sandy Weill of Travelers Insurance negotiated a corporate merger with Citibank, headed by John Reed. We now know the conglomerate bank as Citigroup. The same bank where after only six weeks of negotiation represented a keystone violation of the Glass-Steagall Act principles.

Fast forward less than a decade later and it was Citigroup that was teetering on the edge of complete disaster. In 2008 alone the bank lost a reported $32.1 billion.

The bank was also deliberately hiding “toxic assets” to the tune of $1.3 trillion of its balance sheet.

In the immediate aftermath of the crash Citigroup received the largest bank bailout in U.S history. The U.S. Treasury department (via taxpayer funds) then coughed up a total of $45 billion of capital over to Citigroup with an additional government guarantee of over $300 billion toward Citigroup’s assets.

Sadly, that’s not even the worst part.

Too big to fail might be an easy catch phrase, but the $2.5 trillion in Federal Reserve bailout money (at a near zero interest rate) that was dished out to Citigroup alone is striking. Featured in the chart below, after a “one time audit” of the Federal Reserve it was revealed that the Fed secretly set aside $16 trillion in overall loans. 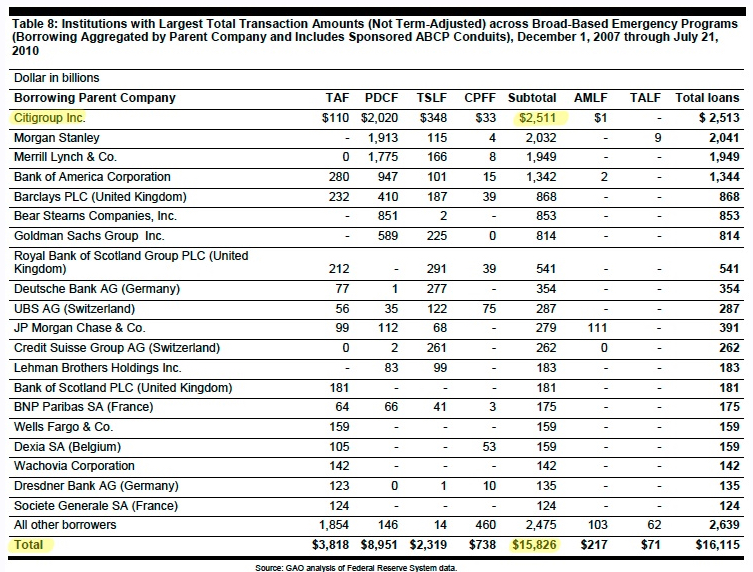 That is not imaginary money. There is nothing rhetorical about the size and ferocity of those funds.

At least not to the 52,000 people that were let go from Citigroup following such a tumultuous management of risk and frivolous casino banking.

As Wall Street veteran, Christopher Whalen noted in The Institutional Risk Analyst, “The answer is to the problem of too big to fail is to require banks to become more efficient, not raise more capital, and to allow weak banks to die.”

“We should slowly mandate that the big banks get smaller and also gradually separate dealing activities from the depository over a period of 5-10 years.”

Not only were investment and commercial banks responsible for the crisis, but the dangerous rhetoric of ignorance allowed them to continue these risky plays — and stay afloat to do it again.

Glass-Steagall: Why Too Big to Fail is Too Dangerous to Deny

Now to push forward to Cohan’s latest dumbfounded commentary, where we find him noting that:

“Let’s be clear: The problem on Wall Street is not the size of the banks, their concentration of assets or the businesses they choose to be in.”

Yet again, Cohan is either severely misreading the problems on Wall Street  or just ignoring them.

For evidence, look no further than agency responsible for conducting research the matter. The Office of Financial Research released a report in February 2015 that identified exactly what was going on. 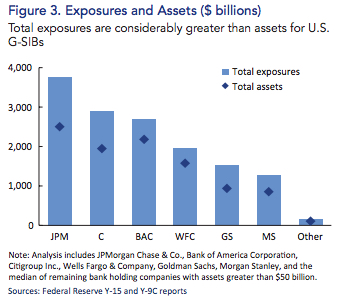 The report notes that:

Translation, size matters. Risk matters. By doubling the size and capacity of these banks, the risk inflates even higher.

Jim Rickards, an economist and Wall Street veteran of a bank that also went on the brink of collapse notes, “The worst thing that can happen in a complex system is that if you double the size of the system, you double the risk.  Since 2008, the five largest banks in the United States are all larger, they have a larger percentage of the total banking assets, there is greater concentration and they now have much larger derivatives books.”

“Everything that was too big to fail in 2008 is bigger and more dangerous today.  And given the complexity of the system the risk is far greater than what we had in 2008.”

The complexity of banks that Rickards highlights is something that the New York Times piece also completely ignores.

Again, turning to the U.S Treasury Department’s own Office of Financial Research for the answers gives us a clear indication of such risk. 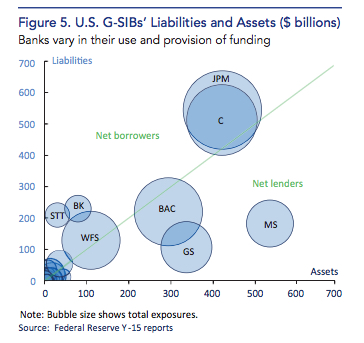 The chart above shows that those banks above the diagonal line have significant obligations to the financial system, while the major banks found below it have significant net claims on the system.

What that translates to in the data is that the total system of assets and liabilities that the bank holding companies were on the hook for equates to a total of nearly $2.5 trillion in assets and $2.4 trillion for liabilities. Enough to tank the system — again.

“The larger the bank, the greater the potential spillover if it defaults; the higher its leverage, the more prone it is to default under stress; and the greater its connectivity index, the greater is the share of the default that cascades onto the banking system. The product of these three factors provides an overall measure of the contagion risk that the bank poses for the financial system.”

That means that the greater the complexity and the larger the bank — the more risks that could impact the entire financial system.

Financial crises are not partisan. The impact on the real economy is not fictitious.

Cohan’s misguided belief that Glass-Steagall advocates put forward an “outdated, cockamamie notion of having the government dictate what businesses Wall Street can be in or how big a bank can be.”

That’s where even David Stockman, the former Budget Director under Ronald Reagan reports, “Severing the big bank’s pipeline to the Federal bailout system and putting Wall Street back on a free market based level playing field is the right thing to do. Today’s multi-trillion banks are simply not free enterprise institutions entitled to be let alone.”

“They are wards of the state dependent upon its subsidies, safety nets, regulatory protections and legal privileges. Consequently, they have gotten far larger, riskier and dangerous to society than could ever happen in an honest, disciplined market.”

Understanding that the system is yet again set up for another round of “too big to fail” exposure is the best way to recognize a market under distress.

It’s high time for our political leaders to act, our major media outlets to speak honestly and our banks to be less complex risk oriented.