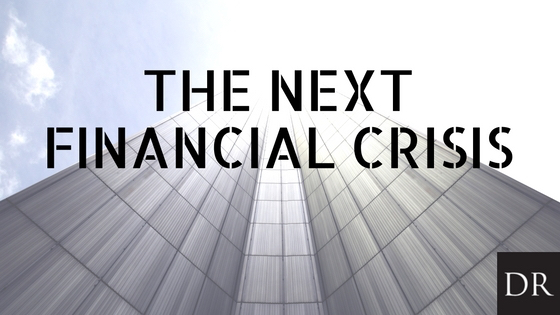 The Next Financial Crisis

The stock market today is not very far from where it was in November 2014. The stock market has had big ups and downs. A big crash in August 2015, a big crash in January 2016. Followed by big rallies back both times because the Fed went back to “happy talk,” but if you factor out that volatility, you’re about where you were 2 years ago.

Again, the 2008 crisis is still fresh in people’s minds. People know a lot less about 1998, partly because it was almost 20 years ago. was right in the middle of that crash. It was an international monetary crisis that started in Thailand in June of 1997, spread to Indonesia and Korea, and then finally Russia by August of ’98. Everyone was building a firewall around Brazil. It was exactly like dominoes falling.

Think of countries as dominoes where Thailand falls followed by Malaysia, Indonesia, Korea and then Russia. The next domino was going to be Brazil, and everyone (including the IMF and the United States) said, “Let’s build a firewall around Brazil and make sure Brazil doesn’t collapse.”

Then came Long-Term Capital Management. The next domino was not a country. It was a hedge fund, although it was a hedge fund that was as big as a country in terms of its financial footings. I was the general counsel of that firm. I negotiated that bailout. I think a many of my readers might be familiar with my role there. The importance of that role is that I had a front-row seat.

I’m in the conference room, in the deal room, at a big New York law firm. There were hundreds of lawyers. There were 14 banks in the LTCM bailout fund. There were 19 other banks in a one billion dollar unsecured credit facility. Included were Treasury officials, Federal Reserve officials, other government officials, Long-Term Capital, our partners. It was a thundering herd of lawyers, but I was on point for one side of the deal and had to coordinate all that.

Those involved can say they bailed out Long-Term capital. They really bailed out themselves. If Long-Term Capital had failed, and it was on the way to failure, 1.3 trillion dollars of derivatives would’ve been flipped back to Wall Street.

The banks involved would’ve had to run out and cover that 1.3 trillion dollars in exposure, because they thought they were hedged. They had one side of the trade with Long-Term and had the other side of the trade with each other. When you create that kind of hole in everyone’s balance sheets and everyone has to run and cover, every market in the world would’ve been closed. Not just bond markets or stock markets. Banks would’ve failed sequentially. It would’ve been what came close to happening in 2008.

Very few people knew about this. There were a bunch of lawyers there, but we were all on 1 floor of a big New York law firm. The Fed was on the phone. We moved the money. We got it done. They issued a press release.

It was like foaming an airport runway. You’ve got a jet aircraft with a lot of passengers and 4 engines on flames, and you foam the runways. The fire trucks are standing by, and somehow you land it and put out the fire. Life went on.

After that, the Federal Reserve cut interest rates twice, once at a scheduled FOMC meeting on September 29, 1998, and again at an unscheduled meeting. The Fed can do that. The Fed doesn’t have to have a meeting. They can just do an executive committee-type meeting on the phone, and that’s what they did. That was the last time, in October 15, 1998, that the Fed cut interest rates outside of a scheduled meeting. Though it was done to “put out the fire.” Life went on.

Then 1999 was one of the best years in stock market history, and it peaked in 2000 and then crashed again. That was not a financial panic. It was just a stock market crash. My point is that in 1998, we came within hours of shutting every market in the world. There were a set of lessons that should’ve been learned from that, but they were not learned. The government went out and did the opposite of what you would do if you were trying to prevent it from happening again.

What they should’ve done was banned most derivatives, broken up big banks, had more transparency, etc. They didn’t. They did the opposite.

The government actually repealed swaps regulations, so you could have more derivative over-the-counter instead of trading them on exchanges. They repealed Glass-Steagall so the commercial banks could get into investment banking. The banks got bigger. The SEC changed the rules to allow more leverage by broker-dealers rather than less leverage.

Then Basel 2, coming out of the Bank for International Settlements in Basel, Switzerland, changed the bank capital rules so they could use these flawed value-at-risk models to increase their leverage. Everything, if you had a list of things that you should’ve done to prevent crises from happening again, they did the opposite. They let banks act like hedge funds. They let everybody trade more derivatives. They allowed more leverage, less regulation, bad models, etc.

I was sitting there in 2005, 2006, even earlier, saying, “This is going to happen again, and it’s going to be worse.” I gave a series of lectures at Northwestern University. I was an advisor to the McCain campaign. I advised the U.S. Treasury. I warned everybody I could find.

This is all in the my upcoming book, The Road to Ruin. I don’t like making claims like that without backing it up, so if you read the book, I tell the stories. Hopefully, it’s an entertaining and readable, but it’s serious in the sense that I could see it coming a mile away.

Too Big To Fail

Then, we come up to 2008. We were days, if not hours, from the sequential collapse of every major bank in the world. Think of the dominoes again. What had happened there? You had a banking crisis. It really started in the summer of ’07 with the failure of a couple of Bear Stearns hedge funds, not Bear Stearns itself at that stage but these Bear Stearns hedge funds that started a search.

There was one bailout by the sovereign wealth funds and the banks, but then beginning in March 2008, Bear Stearns failed. In June, July 2008, Fannie and Freddie failed. Followed by failures at Lehman and AIG. We were days away from Morgan Stanley being next, then Goldman Sachs, Citibank followed by Bank of America. JPMorgan might’ve been the last one standing, not to mention foreign banks (Deutsche Bank, etc.).

They all would’ve failed. They all would’ve been nationalized. Instead, the government intervened and bailed everybody out. Again, for the second time in 10 years. We came hours or days away from closing every market and every bank in the world.

For the everyday investor, what do you have? You’ve got a 401k. You’ve got a brokerage account. Maybe you’re with E-Trade or Charles Schwab or Merrill Lynch or any of those names. You could run a pizza parlor, an auto dealer. You could be a dentist, a doctor, a lawyer, anyone with a small business. You could be a successful investor or entrepreneur.

You’ve got money saved and you’re looking at all of that wealth being potentially wiped out as it almost was in 1998 and in 2008.

How many times do you want to roll the dice? It’s just like playing Russian Roulette. One of these times, and I think it’ll be the next time, it’s going to be a lot bigger and a lot worse.

To be specific, I said in 1998 the government, regulators and market participants on Wall Street did not learn their lesson. They did the opposite of what they should do. It was the same thing in 2008. Nobody learned their lesson. Nobody thought about what actually went wrong. What did they do instead? They passed Dodd-Frank, a 1,000-page monstrosity with 200 separate regulatory projects.

Who has a clean balance sheet? Who could bail out the system? There’s only organization left. It’s the International Monetary Fund (IMF). They’re leveraged about 3 to 1. The IMF also has a printing press. They can print money called Special Drawing Rights (SDR), or world money. They give it to countries but don’t give it directly to people. Then the countries can swap it for other currencies in the SDR basket and spend the money.

Here’s the difference. The next time there’s a financial crisis they’ll try to use SDR’s. But they’ll need time to do that. They’re not going to do it in advance and they’re not thinking ahead. They don’t see this coming.