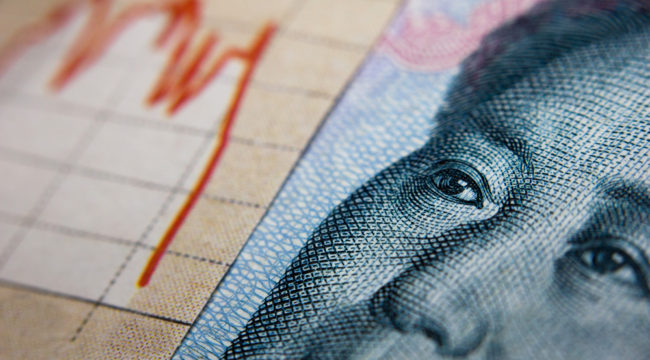 China has reported annual growth rates since the panic of 2008 of between 6.7% and 12.2%, with a steady downward trend since early 2010. If China’s growth engine is running out of steam, as I’ve described, how has China managed to maintain such relatively high growth rates?

The answer is contained in three key words: debt, deflation and waste.

Waste is a blunt word referring to non-productive investment. The investment component of China’s GDP is about 45% of the total. Most major economies show about 25% to 35% for investment.

But at least half the Chinese investment is wasted. It goes to projects that will never produce an adequate return, either on an absolute basis or relative to alternative uses of the funds.

A simple example will make the point. During a recent visit to China I took the high-speed train from Beijing to Nanjing and passed through the magnificent new Nanjing South train station.

The train had the smoothest, quietest ride I’ve ever experienced even at speeds of 305 kph. The noisy clickity-clack of Amtrak’s Acela service from New York to Washington seems like a Wells Fargo stagecoach ride through the Old West compared to the Chinese railroad.

The train station was over a quarter-mile from one entrance to the other side, and had marble floors, high ceilings, expensive boutiques and over 128 escalators that all functioned perfectly.

There’s only one problem. My ticket cost about $30. Tickets on Amtrak for a ride of similar duration cost about $250, and Amtrak losses money.  There’s no way China can pay the costs of building and operating its railroad system with such inexpensive tickets.

But the Nanjing South train station project did create 20,000 construction jobs for over two years. That really is the point. China needs to find jobs for the millions of worker arriving from the countryside looking for work.

Failure to generate those jobs could result in social instability, riots, and attacks on the legitimacy of the ruling Communist Party of China. As a result, China borrows the equivalent of billions of dollars to finance white elephant and prestige projects that create jobs with little thought given to how the debt will be repaid.

How the Chinese Economy Grows

This brings us to the next element in China’s non-sustainable growth formula — debt. Any economy can produce short-term growth by incurring debt and using the proceeds as government spending, tax cuts, investment, or grants. This is nothing more than the classic Keynesian fiscal stimulus with its mystical “multiplier” effect that produces more than $1.00 in aggregate demand for every $1.00 borrowed and spent.

Unfortunately for China, it is both highly indebted and has not suffered a recession for eight years. China should therefore expect the GDP multiplier on new debt used for spending or infrastructure to be less than 1.

That is exactly what the data shows. The chart below measures credit intensity defined as the number of units of local currency needed to produce one unit of growth. The local currency metric is a measured by central bank money printing to monetize debt, and is therefore a proxy for the debt itself.

The chart also shows that China’s situation is growing worse. It takes more and more debt to produce less and less growth. This is a non-sustainable dynamic that can only end in a debt crisis, a recession, or both. 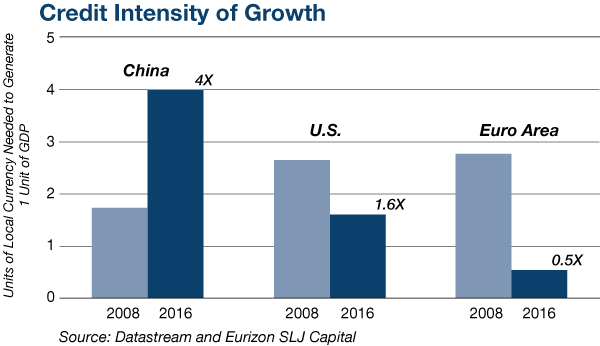 China and the U.S. China are in the worst position, where 4 units of debt are needed to create 1 until of growth. This suggests a debt “death spiral” ending in a credit crisis, recession, or both.

China is now trapped in a debt death spiral. It cannot afford for growth to slow because that would cause unemployment, bankruptcies, and social unrest. But, it cannot continue growing without massive borrowing and spending programs.

China is Ground Zero for Deflation

This debt problem points to the third element in China’s growth formula, which is deflation. Persistent deflation and disinflation is caused globally by a combination of demographics, debt, deleveraging, and technology.

China is ground zero for global deflation because of its cost structure and its cheap currency that exports deflation to trading partners.

Deflation is really “negative inflation.” In converting from nominal to real growth, you are subtracting a negative, which is like adding. For example, an economy with 1% nominal growth and 2% deflation, would have 3% real growth, (1 – (-2) = 3).

This “growth through deflation” dynamic has been playing out in China is recent years. This can produce higher real growth, but it does so with lower nominal growth.

The problem is that debt repayments are nominal. While real growth can be strong in a deflationary period (like in the U.S. in the 1870s), the lack of nominal growth makes it harder to pay off nominal debt. Deflation makes the real value of debt go up, which compounds an already dangerous debt situation.

On the earlier visit to Nanjing, I met with provincial Communist Party officials who took me on a tour of a massive multi-city construction project with office parks, skyscrapers, apartment buildings, hotels, recreational facilities and transportation links for each of the cities. It was all empty.

When we returned for tea in the provincial officials’ offices, I asked how they expected to repay the debt used to fund the construction. The head official answered matter-of-factly, “Oh, we can’t repay it. Beijing will have to bail us out.”

Similarly, a Bloomberg reporter recently interviewed a Chinese bank customer who had just purchased a Wealth Management Products (WMP) from her bank. The reporter asked the customer if she was worried about the credit quality of the loans backing-up her WMP. She replied, “No, not at all. If anything goes wrong, Beijing will bail us out.”

This blind faith in Beijing’s ability to bail out every bad debt in the world’s second largest economy raises the question of Beijing’s willingness and ability to do so.

In less than six months, the yuan could finally undergo a maxi-devaluation.