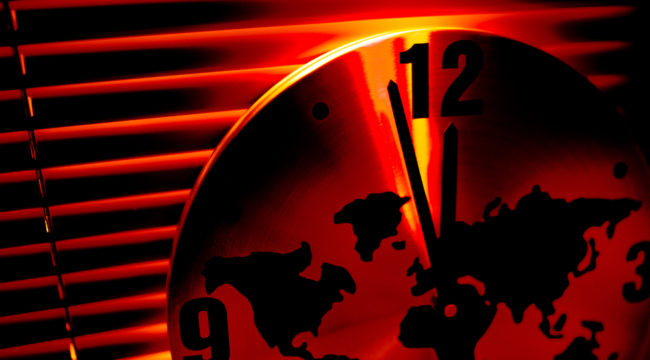 [Ed. Note: Jim Rickards’ latest New York Times bestseller, The Road to Ruin: The Global Elites’ Secret Plan for the Next Financial Crisis, learn how to score your free copy here. This vital book transcends geopolitics and media bias to prepare you for the next crisis in the ice-nine lockdown.]

One of the biggest convergences today between economics and geopolitics is China’s three trillion dollar countdown clock.

The first that needs to be made is that this problem used to be a four trillion dollar countdown clock, and it’s now down to three trillion. Currently, numbers have that figure slightly below three trillion when evaluating China’s hard currency reserve position. Any country has a currency reserve. Think of it like a savings account, to make it really simple. You stick it in the bank, or a brokerage account, and that’s your savings.

Countries are not that much different than individuals. They make money, and they spend money. A country that exports more than it imports is going to have a trade surplus. China is an example of this.

China sells considerably more to the world than it buys. They get paid predominantly in U.S dollars and the excess is what has been built up in the Chinese economy and its reserve position.

Over a twenty year period, by the end of 2014, it had the largest reserve position in the history of the world. It was slightly more than four trillion dollars. While not all of it was in dollars, a majority was.

The other part of that was approximately two trillion dollars that was invested in U.S. government securities of various kinds. That’s what the Chinese economy earned from building huge trade surpluses over the past twenty years.

What has happened since the end of 2014? Well the first thing that happened is that they have lost over a trillion dollars. As of a month ago they were down to about three trillion. A trillion dollars has gone away. Where did it go? The answer is, China has been trying to prop up its currency. Its currency is the Yuan.

The exchange rate between yuan and dollars is around seven to one or just a little bit less. It wasn’t that long ago when it was close to six yuan to the dollar. This meets the definition of devaluation.

How has China done this? The simple version of making the price of anything go up is making considerable purchases. China has gone into the market and used dollars from its reserves to purchase yuan, its own money, in order to keep it stronger.

In doing that they have pushed a plan of spending the dollars. U.S dollars are leaving and that’s where the trillion dollars has gone. Ultimately, the Chinese economy has used upwards of a trillion dollars to prop up the yuan.

We see this in luxury real estate markets around the world. The wealthy Chinese are seeking to get money out of the Chinese economy have heavily invested in high end real estate. They buy very expensive condos. You see it in Sydney, Vancouver, New York, London, Istanbul. All over the world, we see the same story.

These are the two problems facing China. One, China spending massive amounts of money to prop up the yuan. Two, Chinese individuals getting their money out of China. Regardless of how it happens, dollars are leaving China as fast as they can.

The reason we have a banking panic in China right now is that while it’s a rotten system that is full of bad debts, China can still bail it out.

A couple of years ago I was in Nanjing, China and met with local officials while they were in the process of building these “ghost cities.” I went out and visited ghost cities that were as far as the eye can see. Each one had skyscrapers, apartments, hotels, resorts, shopping centers. But they were completely empty.

I asked the Chinese government officials, how’d you pay for all of this? They responded, “we borrowed the money.” When I asked how they plan on paying back the debt they remarked it was not possible and that, “Beijing’s going to bail us out.” What this means is that the attitude not only outside of China, but inside of China is that Beijing is going to bail them out.

Think of it as people running out of a crowded theater. You don’t want to be the last one out. The same is true of creditors. of wealthy Chinese, of anyone with money in the country.

This whole thing is imploding, and it won’t be 50 billion dollars a month. It will be 50 and then it’ll be 60 and then things hit the wall. If this trend continues the way it is, my estimate is that China will be broke by the end of 2017. Will that actually be allowed to happen? No, the Chinese won’t let it. But then you have to say, what’s the reaction?

If they’re in the process of going broke, what is it that they can do to stop this? This is where the Impossible Trinity needs to be factored in. It’s an economic concept that goes back to the early 1960’s, was articulated by the great Robert A. Mundell, a Nobel Prize winner.

What he said was that there are three aspects of the international monetary system. Each country has got to make decisions with regard to these three things. And you cannot have all three at once.

Separately, an independent monetary policy means you can put your interest rates wherever you want, you don’t have to follow another central bank – like the Federal Reserve. And a fixed exchange rates means that we’re going to take our currency and peg it to another currency – as currency units have done with the U.S dollar. If you see a country trying to have the Impossible Trinity, you can be very certain that something is going to break.

So China’s trying to have the Impossible Trinity. They’re trying to do the impossible all while they’re going broke.

The question is, how are you going to stop it?

Well, you’re going to have to do one of three things.

First, China could raise interest rates. The Chinese are not going to have an independent policy if the Federal Reserve continues tightening, they’ll have to tighten. That would tend to keep money at home.

Second, if the interest rate’s going up, people could choose to keep their money in yuan. This action though could sink the economy. Legally, they could do this. Economically, they could potentially get away with it. But politically, they could not do it because they’ll cause bankruptcies and generate mass unemployment which would undermine the stability of the Chinese Communist Party.

Third, under China’s $3 Trillion countdown clock it could close independent capital accounts. That brings us to what’s going on right now.

The problem is, they can’t do it. They’re trying but they can’t completely close it because it’ll anger the International Monetary Fund (IMF). Under the IMF they require an open capital account. This would cause massive losses in foreign direct investment. It would lead to people placing their money in China and not being able to get it out.

While this option might stop the bleeding in the short run, it would mean no new capital influx. Not having new money coming into the country is just as bad as the old money going out.

There is a final thing they could do. Devalue the currency. This is the most likely option.

This will not play well for the White House where Donald Trump has already called China a currency manipulator. This option would also present global repercussions. Under this option, I would expect stock markets to crash, bond markets to rally or have an interest rate crash where rates go down.

Slash, crash, and rate moves – expect all kinds of dislocations. And we already know this because when China did a mini devaluation August, 2015. At the time, the U.S. stock market fell over ten percent in three weeks.

This is when, what I call a “maxi-devaluation,” takes place. Under a maxi-devaluation the Chinese would experience not a three percent shift but somewhere between a five percent to fifteen percent change – acting to do whatever it takes.

Expect massive instabilities all throughout the system. In China, the United States, equity bubbles, the Impossible Trinity – where the whole system would be set for failure.

I think we should hope for the best but prepare for the worst.

Thank you for reading,