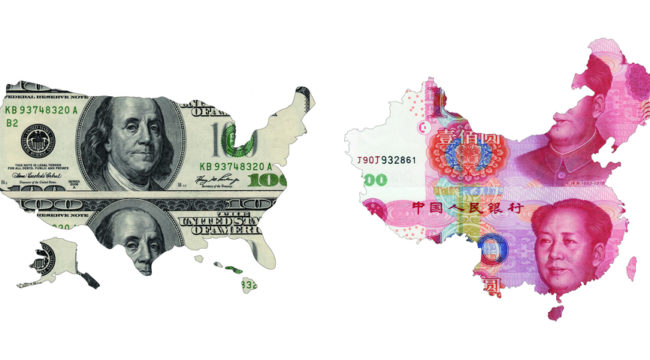 Welcome to the currency wars. The Trump administration has entered a new low in relations with China. The change comes after the White House announced it is officially beginning to take aim at China’s economic strategy.

As friction between the world’s greatest economic powers deteriorates toward a high stakes currency war, the global economy could see spillover in financial, geopolitical and trade arenas.

The White House recently announced its plan to open up fresh investigations into Chinese trade and intellectual property practices. Now that China’s 100 days are up following Trump’s meeting with President Xi Jinping, the White House is no longer holding back on contempt for China.

President Trump campaigned on a hardline message on China, but seemingly backed off of rhetoric after entering office. That approach changed after his geopolitical targeting on Twitter that lashed out at the Chinese government and the lack of action toward North Korea.

I am very disappointed in China. Our foolish past leaders have allowed them to make hundreds of billions of dollars a year in trade, yet…

Conditions on the Korean peninsula appear as though they will continue to escalate, and as they do the expectation is that it will drive a major wedge between the U.S and China. What that means is conditions are extremely ripe for a trade and currency war between the respective economic powers and their global trade operations.

All hope is not lost, yet. That is primarily because a significant amount of pressure has been placed on the North Korean regime. Seemingly, as goes the China-North Korean relationship so swings the pendulum of the Trump administration.

The latest round of United Nations Security Council sanctions that had unanimous votes from China, Russia and the United States shows progress. The achievement at the U.N was as much about North Korea as it was about the ability of the U.S and China signaling bi-lateral cooperation.

However, within the current system, regardless of ongoing negotiations, both governments appear destined for conflict. One can only imagine how, in such a nationalist based system, a currency war could detrimentally impact those at the lower end of the economic spectrum. That’s why those in government leadership — even those who might not be directly involved — have major reason to try and work together.

Here are the major issues and repercussions looming in the U.S-China divide:

Currently, to do business in China foreign companies are required to disclose technology with the government and any foreign subsidiary involved with the agreement. This requirement is largely where issues of intellectual property, technology and trade problems have arisen.

Under the leadership of Trump’s appointed U.S. Trade Representative, Robert Lighthizer, the administration is expected to roll out a significant policy overhaul. For Lighthizer, a strong critic of free trade, this opportunity allows for the administration to bring penalty measures against China for “unreasonable or discriminatory and burdens U.S. commerce.” It is expected that the investigation details will be unrolled in the days and weeks ahead and signal that significant trade practices are due to change.

The reaction from any such moves will not be lost on the Chinese government. The move would negatively impact China’s technology sector. It would hit at the heart of hardware and software built and exported from the country – especially when much of that innovative science is largely brought into the country via foreign research and development.

In 2016 China imported an estimated $1.5 trillion from major U.S allies that include South Korea, Japan and Germany. To put that into perspective that’s more than China spends on energy imports to the country by over $50 billion dollars.

What’s even more compelling to the currency war factor is that it is a bipartisan supported issue. Upon the announcement of a trade inquiry into China, Senate Democratic leader Schumer (NY) along with Senators Wyden (OR) and Brown (OH) came out in direct support.

They cited that U.S industrial benchmarks including aircraft, automotive and semiconductors have ben caught in the crosshairs of Chinese policy infractions.

Jim Rickards is a former member of the Committee on Foreign Investment in the United States, or CFIUS. The committee is responsible for reducing the threat of foreign acquisitions to American companies that could present national security issues. CFIUS could become an even greater tool in pushing back Chinese investments in the U.S.

Rickards’ offers his analysis on the concern over trade wars noting, “Soon Trump will announce steel and aluminum tariffs. After that, more action will be taken to punish Chinese banks that help North Korea finance its weapons programs.”

“By November, the U.S. will label China a currency manipulator, which will start another review process, leading to still further sanctions. China will not take any of this lying down but will retaliate with its own sanctions, tariffs and bans on U.S. investment in China.”

The CFIUS expert and author of the book Currency Wars levels that, “This trade and currency war will shake markets and be a major headwind for world growth.”

The North Korean threat is one that continues to escalate and raise tensions around the Korean Peninsula.  A nuclear threat and the missile capability that comes with it is something that could potentially bring about a very real shooting war or worse.

Whether there is credibility or not in the Chinese ability to dampen Korean aggression does not matter.  The Trump administration has clearly perceived that no action from the Chinese will be met with U.S reaction.

As we saw in June with the Chinese restriction on fuel sales to the North, Beijing is willing and able to place pressure on North Korea, but the question remains – how far are they willing to go?

The issue extends beyond Washington politics as usual. Sen. Chuck Schumer recently sent a letter to the Trump administration offering that, “It is my assessment that China will not deter North Korea unless the United States exacts greater economic pressure on China.” The leading Democratic Senator from New York wrote to Trump, “The U.S. must send a clear message to China’s government.”

As the 19th National Congress of the Communist Party of China held in early fall approaches, Xi Jinping’s rule will either rise or fall based on regional conflict, economic standing and North Korea.  The Congress is held twice every decade and is largely a rebalance of leadership and shuffling of party members.

It is largely expected that President Xi will be able to consolidate power, making him one of the most powerful rulers since Mao, and an opening to whether he stays beyond 2022.

If regional tensions blend with economic maneuvers from the Trump administration, a true test of power in the Asia-Pacific could begin. The start of such regional saber rattling could be seen preliminarily through currency wars but will not be isolated to tit-for-tat financial tactics.

An article run by a Chinese state media outlet offered a grim, but very realistic measure of what policy leaders in the country are watching.

A major headline featured in the South China Morning Post in August:

The article cited, “Central bank governor Zhou Xiaochuan argued publicly in 2009 that the world needed a new global monetary system to dethrone the dollar, with one solution to create a “super sovereign” currency based upon Special Drawing Rights, an accounting unit of the IMF.”

The potential for the SDR, or new world money, to supersede the dominance of the U.S dollar as the standard reserve currency is now underway.

The Chinese media outlet reported that since the country entered the SDR currency basket, “China has promoted the use of its currency in cross-border trade and investment, signed currency swap deals with dozens of central banks and created several offshore yuan markets, including in Hong Kong, Singapore and London.”

This move confirms that Chinese regional power ambitions will continue as it increases the use of the SDR in contrast to the dollar based system.  While that change in itself is not a landmark shift toward currency war skirmishes, the fact that China continues to internationalize the SDR is noteworthy.

Economist Nomi Prins, a central banking expert and historian has noted that, “China’s power ambitions go well beyond the Special Drawing Rights (SDR). They include international diplomacy, sustainable energy dominance, and becoming a focal point for alliances through Europe, Russia and the ASEAN states.”

Beijing is deploying a range of tools in pursuit of its overall strategic plans for Asia.  Its ability to pump money into investment funds, spread the SDR system into offshore market accounts and continued emphasis on business policies guided by Communist Party leadership will all be factors that could give way a potential currency war.

The Communist Party in China has maneuvered its financial position so that any negative speculation against the yuan can be deflected by its participation in the SDR.

Trump is highly expected to issue a memo directing his trade representative to investigate Chinese intellectual property infringement against the U.S. The move would enact Section 301 of the Trade Act of 1974 and open up a significant downturn in relations.

All of this comes as the dollar continues to struggle after recently hitting a 15-month low.  That is not good for a U.S economy facing mounting pressures from Asia.

At the signs of any weakness, capital markets tend to move fast.  The evolving state of affairs between the U.S and China, especially when looking in the face of a currency war showdown, will be crucial to monitor.

The markets have not priced in the stark reality of a currency war between these two global powers. Soon, they may have no choice but to do just that.