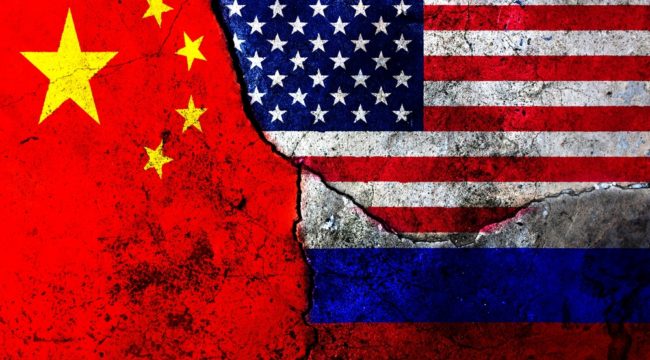 Hegemony is a Three-Player Game

[Ed. Note: Jim Rickards’ latest New York Times bestseller, The Road to Ruin: The Global Elites’ Secret Plan for the Next Financial Crisis, is out now. Learn how to get your own free copy – click HERE. This vital book transcends geopolitics and rhetoric from the financial press to prepare you for what you should be watching now.]

Three-player games are easy to model — it’s always two against one. The art of geopolitics and examining hegemony powers in such situations is to be part of a duo that pressures the remaining player, or, at a minimum, keep the other two players separated.

This is basic balance-of-power politics as practiced since the rise of Napoleon (1799), with antecedents in the Treaty of Westphalia (1648), and Machiavelli’s The Prince (1532).

The case for normalizing relations between Russia and the U.S. rests on the coming confrontation between the U.S. and China. This confrontation stems from China’s refusal to help the U.S. deal decisively with North Korea, which is pushing the U.S. toward a pre-emptive war on the Korean peninsula.

Other flashpoints with China include conflicting claims in the South China Sea, currency manipulation, trade subsidies, theft of intellectual property, and cyber-warfare.

These conflicts were held in abeyance while China was given “100 days” (from the Mar-a-Lago summit on April 6, 2017 to July 15, 2017) to help with North Korea. Now that the 100 days are up and China has failed to deliver, the gloves are off. The months ahead will witness increasing tension and specific actions by the U.S. aimed at China.

To secure the U.S. position in this conflict and as a simple matter of statecraft, the U.S. needs improved relations with Russia as an offset to deteriorating relations with China.

Russia can assist the U.S. is numerous ways. First and foremost is Syria. Russia and the U.S., along with indigenous forces from Iraq, Jordan and the UAE, are well down the path of eliminating ISIS as a political entity. (ISIS will remain as a terrorist incubator along with Al Qaeda franchises and their respective sympathizers).

A modus vivendi can be reached where Russia and their Ba’athist allies, U.S.-backed rebels, Kurds, and Turkey all have separate spheres of influence in Syria. The loser in this scenario is Iran, which has been a leading backer of Syrian dictator Bashar al-Assad.

Russia can also help the United States on the North Korean dossier even though China has proved unable or unwilling to do so. Russia has enormous economic leverage in North Korea. Private intelligence service STRATFOR reported the following on July 11, 2017:

By stepping into China’s shoes as a supplier to North Korea, Russia has increased its leverage over North Korea and therefore has increased its ability to assist the United States. This type of leverage is one of the few paths to a resolution of the North Korean nuclear issue without resorting to war. It is of enormous value to the U.S. and argues in favor of improved U.S.-Russian relations.

The foregoing is an overview of the greatest political struggle in the world today. The nationalists and realists want to improve U.S. relations with Russia. The globalists are horrified at the prospect and want to maintain warm relations with China while isolating Russia.

The White House has already decided in favor of Russia. The problem is how to execute that plan in the face of withering attacks about phony scandals from the media, Democrats, resistance and globalists.

The standard globalist attack on Putin says he is an autocrat at best, a dictator at worst, who murders some political enemies, jails others, and suppresses dissent in Russia. This is all true.

The rebuttal is that China is worse. President Xi is an actual dictator, not a presumed one. He presides over a top-down Communist dictatorship. China slaughtered thousands of innocent protestors in the Tiananmen Square demonstrations in 1989 and has refused to allow any acknowledgement of it ever since.

The Chinese dissident, Liu Xiaobo, won the Nobel Peace Prize in 2010 for his efforts to advance the cause of human rights and political freedom in China. He died while in custody on July 13, 2017 after decades in prison and political reeducation camps. Xi’s political enemies, such as former Chongqing party chief Bo Xilai, have been arrested and subjected to torture and imprisonment.

In short, human rights and respect for political dissent leaves no basis for choosing between Russia and China. Both Putin and Xi are thuggish, with Putin being subject to slightly more pluralistic constraints, while Xi basks in the glow of globalist approval.

The choice between them boils down to power politics, not who wins a globalist beauty contest. Trump is tilting toward Russia for good reasons of realpolitik.

As evidence for this tilt, following the July 7 meeting between Trump and Putin at the G20 summit in Hamburg, Germany, Trump said:

People said, ‘Oh they shouldn’t get along.’ Well, who are the people that are saying that? I think we get along very, very well. We are a tremendously powerful nuclear power, and so are they. It doesn’t make sense not to have some kind of a relationship.

This has huge implications for capital markets and your portfolio.

It is up to the United States to defend its monetary ground. However, the likelihood of that is low because the U.S. does not even perceive the problem it’s facing, let alone the solution.

This evolving state of affairs creates enormous opportunities for investors in the coming months ahead.