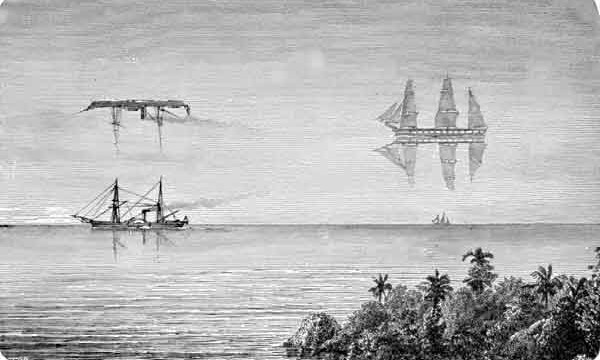 A Fata Morgana is a kind of mirage in which distant objects at sea appear to be floating in mid-air or upside down, sometimes both. One famous literary description of a Fata Morgana occurs in Chapter 135 of Herman Melville’s masterpiece, Moby Dick.

As Ahab is pulled overboard, and the White Whale rams the Pequod, Melville writes:

“The ship? Great God, where is the ship? Soon they through dim, bewildering mediums saw her sidelong fading phantom, as in the gaseous Fata Morgana.”

But, of course the ship was sinking, the vision was an illusion.

Illusions can persist as long as the conditions that give rise to the illusion dominate. In the case of a Fata Morgana, those conditions involve heat and light. In the case of the Fed, the illusions involve bad models. A change in the weather will shatter a Fata Morgana. A change in the economy will shatter Phillips, NAIRU and Ferbus.

This is neo-Keynesian nonsense. It applies in some special cases (1965-1969), but does not apply in the general case. The Phillips Curve was discredited in the late 1970s (high inflation and recession coexisted, called “stagflation”), and yet Fed Chair Janet Yellen clings to it like Linus with his blanket. What the Phillips Curve and Linus’s blanket have in common is they are both in shreds.

Today inflation is nowhere in sight and deflation is the greater risk. Only Yellen and a few like-minded Fed officials see inflation as a risk because they’re looking at models, not the real world.

NAIRU is the acronym for the infelicitously named “non-accelerating inflation rate of unemployment,” or the point at which tight labor markets lead to higher inflation. In the past four years, Fed estimates have moved the NAIRU goalposts from 6.5% to 5.5% to 5%, and now to 4.9% and so on. That’s strong proof that NAIRU doesn’t actually exist. NAIRU is like a unicorn – you can describe it in detail but it never appears in the natural world.

FRB/US (affectionately called “Ferbus”) is the acronym for Federal Reserve Board US macroeconomic model. The Fed describes it as “a self-contained set of equations, data, programs and documentation that enables various types of simulations.”

FRB/US is the tool the Fed uses to forecast economic performance.

For the record, Fed one-year forward forecasts have been incorrect by orders of magnitude for seven consecutive years. That’s because FRB/US is an equilibrium model, and the economy is not an equilibrium system – it’s a complex dynamic system requiring completely different tools to model. If you use the wrong model, you’ll get the wrong forecast every time.

Why does this matter? It matters because the Fed is still on course to raise interest rates later this year. Markets, in their typically moody style, have gone from expecting four rate increases to none in a matter of weeks. Both market estimates are overwrought.

In fact, the Fed is tightening into weakness and will persist in doing so. As a result, investors should expect near recessionary conditions, and continued declines in stock prices for the next 6 to 8 months.

Expect the Fed to raise twice more, in March and June, (because of their model-based mirage), and then ease (because recessionary reality will hit them like a 2×4 to the forehead by late summer).

At that point, Fed ease will take the form of forward guidance; basically an announcement that the Fed is done raising rates for an extended period. Stocks may rally late in the year based on this easing. Forward guidance will be used to ease since the Fed cannot actually cut rates after July due to the election cycle. December 2016 is the earliest possible date for a rate cut.

Talk of more quantitative easing (“QE4”) is premature at best, and probably incorrect. Evidence is emerging that QE doesn’t work as intended. Besides, the Fed has other easing tools they will use first including rate cuts, forward guidance, and a cheaper dollar. QE4 is a mid-2017 event at the earliest, (and the Fed may even experiment with negative interest rates before more QE).

Reality is sinking in for the markets, but the Fed will be the last to know because they are fixated on the mirage. That illusion will be gone by late July when Q1 and Q2 2016 GDP data are in hand. Then the easing cycle will begin.