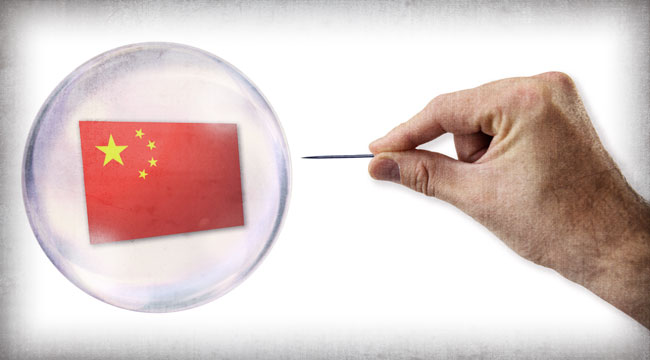 Remember When… China was in a bubble? Oh, wait… it still is...

Not only will you be shocked at just how quickly time passes (yes, 2005 was a decade ago), but you can see what we predicted correctly, what we missed the mark on, and how history does, in fact, have a habit of rhyming…

It was only five years ago when unemployment in the eurozone hit a new 10-year record at 10.1%. Youths in Spain had an unemployment rate of 40%, and an average of 20% jobless for the eurozone overall. The Netherlands and Germany were the only two economies to show even a slight increase in employment.

“Until the jobs picture improves” we said at the time, “Europe is no more likely than the US to see any real economic recovery.”

So far, that call looks right. According to Trading Economics, “Unemployment Rate In the Euro Area remained unchanged at 11.30 percent in March of 2015 from 11.30 percent in February of 2015.”

“Consumers Saving to Save the US Economy”

In a surprising turn of events, household spending increasing despite flat or falling income. The savings rate climbed to 3.6%, too as Americans still nursed their wounds from 2008, the month prior, which was the highest level since January of that year. But, as usual, Bill Bonner was there to play devil’s advocate. This saving surely wouldn’t last, because households didn’t have money, and they didn’t have anything to borrow against. Deleveraging, we suggested at the time,  is the only prescription that will cure these hallucinations of the end of the correction. It’s still a good idea… somebody ought to try it.

“One Story to Sum Up Investing in China”

If anyone can capture, in a nutshell, the challenge in getting a handle on investing in China, it’s Chris Mayer. In this article posted five years ago today, Chris shared a story relayed to him by our China contact, who was in an antique store, negotiating for an old knife. When the dealer saw his Rolex watch, he offered to exchange. Our friend was ready to make the trade, but, knowing his Rolex was a fake, didn’t want to take advantage of this man and fessed up. The dealer said, “That’s OK, this knife is fake too.”

That, dear readers, was how Chris came to the conclusion that figuring out what’s real economic growth and what’s fake is a very tough thing to untangle in China. You walk around Beijing and see new buildings, traffic, and bustling stores, yet can’t help but wonder how much is due to natural demand, and how much is artificial stimulus. If it’s the latter, what you see is unsustainable. Five years on, our own Jim Rickards is still portending the greatest unwind in economic history. Grab a snickers…

“Bad Debts of the World Unite!”

Bill Bonner mused over the notion of a cooperative, worldwide approach to bad debt, rather than countries defaulting on an individual basis. The idea of putting all the bad debt together and getting the whole world in on it, so the whole world’s credit will go bad is pure nonsense. As the amount of debt increases, the quality of the credit falls, whether you spread it out or concentrate it. Europe was reluctant to add debt, and America was eager to continue adding debt, with no recovery in sight. Not much has changed… and neither has our outlook. Look out below…

“Hedge Funds Got Hammered in May”

Hedge funds got hit hard in May of 2010, having lost roughly 2.7%. The last time hedge funds struggled this badly in a single month was back in November of 2008, in the aftermath of the Lehman bankruptcy. This go round suggests that the market and the Dow’s “worst May since 1940” were to blame.

At writing, the pressure was back on the euro, as it hit a new “cycle” low of 1.2110. The markets were punishing the euro for austerity measures, that only a couple of weeks prior, the markets themselves had demanded. Rumors circulated that France was getting help in the form of bonds purchased by the ECB, and Germany’s Chancellor, Angela Merkel, was losing her political capital. In retrospect, just a bad day overall for the euro.

“A Bit About Drilling”

Way back in 2005, rig day rates were “rapidly escalating to record or near-record levels,” taking even the largest offshore drilling contractors by surprise. Rig rates for second and third generation offshore rigs moved as high as $160,000 a day. The year prior, in 2004, the cost of finding and pumping a barrel of oil, including labor, equipment, and seismic testing, cost $17.12, up 43% from just one year earlier. Rig builders were actually scrambling to meet all the new demand. Compare that to today, when, at writing, a barrel of crude will cost you $60.30, and demand is petering out thanks to U.S. fracking and Saudi Arabia.

“Does the Future Belong to China?”

China’s rate of economic development had earned it admiration from people and countries all over the world. But many, present company included, believed the country’s economy would not be able to last at the present speed. Will China crash or become the next economic superpower we asked? Will it be a friend or foe? A few Americans, like political scientists and military officials, were sounding alarms about the potential Chinese military and political threats.  At the time, China was home to 1.3 billion people, four times America’s population at writing. Today, China’s population is up to 1.4 billion. We standby our convictions… the China boom will turn to an ugly bust. Just wait and see…

P.S. If you haven’t signed up to receive the Daily Reckoning by email yet, click here to join, for free, now! We write to you with fresh, entertaining, and informative ideas on finance and politics every day the market’s open. You can sign up here to get the DR sent to your inbox, daily for free. Click here to join us now.