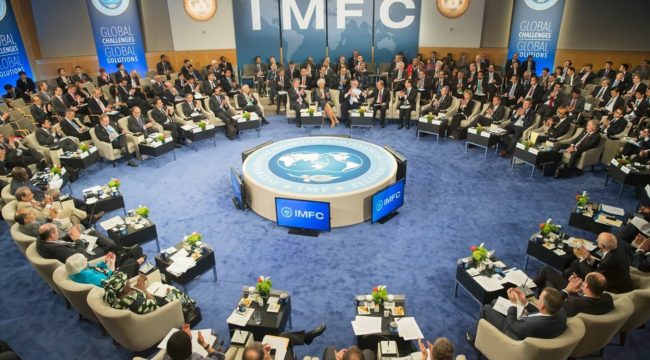 Behind Closed Doors at the IMF

The Washington, D.C., area is thick with secret agencies with“three-letter names,” such as CIA, FBI, NSA and less well-known outfits such as the Defense Intelligence Agency (DIA) and the Director of National Intelligence (DNI).

One of the most powerful, and also most secretive, of these agencies is an institution that is not even part of the U.S. government. It’s an autonomous part of an emerging scheme of global governance accountable only to a small elite of central bankers, finance ministers and heads of state. That institution is the International Monetary Fund, or the IMF.

Everything about the IMF is designed to deceive you—beginning with the name. The IMF is not really a “fund” in the sense of an endowment or mutual fund; it functions as the central bank of the world, taking deposits, called “borrowings,” from countries around the world and making loans to its members.

It prints money like most central banks, but this world money has the opaque name of special drawing right, or SDR.

Now, when I say world money, it sounds kind of spooky or scary, but it actually has a funny name. It’s called the special drawing right, or SDR. The global financial elites pick strange names for what they’re doing so people don’t understand what it is. The International Monetary Fund (IMF) can print these SDRs.

They have in the past— there’s nothing new about it. SDRs were created in 1969, and hundreds of billions of them have been issued over the years. But the IMF only issues them when there’s a financial panic. They don’t issue them every day or when times are good.

So for example, when I go to Turkey, I cash in some dollars and get some Turkish lira. I use the lira to pay for taxis in Turkey. Then when I leave, I cash them out again. That will be how the dollar is used. You’ll use the dollar when you come to the United States, but it’ll be like Mexican pesos: something you use when you go there.

The dollar won’t be the important global reserve currency. The SDR will be used for the settlement of the balance of payments between countries, the price of oil and perhaps the financial statements of the 100 largest global corporations. The impact on everyday investors will be inflationary.

The difference, however, is that, right now if we have inflation, everyone blames the Fed. In the future, however, you’ll have inflation coming from SDRs. That means when people try to blame the Fed, the Fed will say it’s not us; it’s those guys over there on G Street in Northwest Washington. Go blame them. No one even knows where the IMF is. So the SDR is just a way to get inflation through the back door.

The IMF has a convoluted governance structure in which the highest decision-making body, the Board of Governors, has little power because the votes are weighted in favor of the largest economies, such as the U.S. Actual power rests with the blandly named International Monetary and Financial Committee, the IMFC. Everything about the IMF is designed to make it difficult for outsiders like you to have any idea what is going on. The insiders like that arrangement just fine.

Given this culture and history, it was surprising to see the publication a few years back of a book by Liaquat Ahamed, Money and Tough Love—On Tour With the IMF. The book is the most detailed account yet from behind the scenes at IMF headquarters.

The author also reports on an IMF annual meeting in Tokyo and goes on the road with IMF “missions” as they monitor large and small governments around the world. These missions are the key to forcing governments to conform to the “rules of the game” as established by the global monetary elites.

Ahamed had difficulty getting the cooperation of the IMF and access to IMF meetings and missions he needed to write the book. In the opening section, he writes, he soon discovers that gaining access to the world behind its doors will not be easy. The fund is the repository of many secrets, which it guards ferociously. It does its work behind the scenes, out of the public eye, and has a history of being wary of the press… The fund benefits from a certain mystique that could be lost by too much openness.

In the end, Ahamed was granted access by IMF Managing Director Christine Lagarde. What follows is a revealing account that is part history, part economics and part James Bond as Ahamed travels from Washington to Tokyo; Dublin; and Maputo, Mozambique. He describes IMF interactions with other members of the global power elite as well as the IMF’s member countries in both the developed world and among the poorest.

Importantly, the book is highly accessible. Ahamed avoids the arcane jargon that fills most accounts of the IMF as well as the IMF’s official publications and reports. Anyone with the slightest interest in the workings of the international monetary system will find this book an excellent guide to how the IMF goes about its business on a day-to-day basis, and how the IMF has the power to make or break sovereign governments by deciding whether or not to make loans when those governments are in financial distress.

One of the book’s main takeaways is the demonstration that the IMF is just as powerful as the military and CIA when it comes to forcing regime change in governments that do not follow U.S. orders. Of course, the IMF does this without firing a shot. They use money as a weapon just as effectively as the military uses special operations or the CIA uses drones.

Second, if Western nations lose votes in the IMF and those votes are given to communist China, then the IMF money weapons may be aimed at the U.S. in the future.

In recent decades, the emerging markets and southern Europe have needed IMF bailouts. In the future, the U.S. may be the one that needs to be bailed out, and we may have to accept conditions imposed by China using the IMF as its monetary agent.

The book is also timely. While the IMF has always been opaque, its importance to global finance has waxed and waned over the decades. Now the IMF is about to enter its most powerful stage yet. Central banks bailed out the world in 2008. The next financial panic will be bigger than the ability of central banks to put out the fire. At that point, the only source of global liquidity will be the IMF itself.

The issuance of 5 trillion of SDRs, equal to $7.5 trillion, to paper over the next financial panic will be highly inflationary. The difference between this coming inflation and those in the past is that few investors will know where the inflation is coming from. Politically, it will not be easy to hold the U.S. Treasury or the Federal Reserve accountable, because they will just point a finger at the IMF.

The one true advantage of SDRs is that very few people understand them, and there’s no political accountability.

This book will make you better acquainted than most with this hidden source of inflation. Ahamed’s book is a good chance to meet the financial world’s fire department before the next great fire.