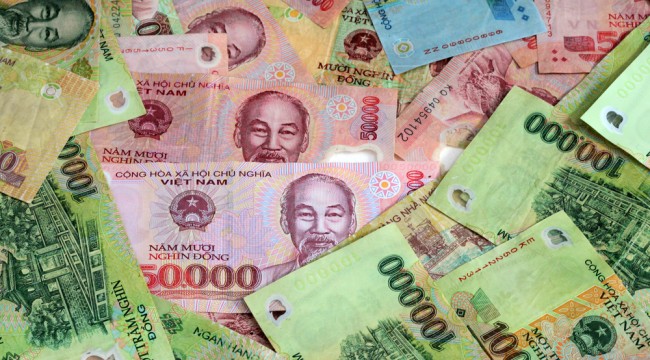 Pity the Fool Who Holds the Dong

Vietnam has dealt with inflation for many years. Many individuals have stored their wealth in gold bullion. The local currency, the dong, has floundered. As a result, the gold trade has flourished for decades.

As a result, the central bank of Vietnam made itself the sole legal importer of gold. They have also granted Saigon Jewelry Co. a monopoly on bullion production. Gold is so valuable in Vietnam’s inflationary economy that banks paid interest on gold deposits… until the central bank banned it, replacing it with a mandatory storage fee.

Undeterred, the people of Vietnam still hold an estimated 300-400 tons of bullion privately. According to Bloomberg, the central bank wants to convert it all to dong deposits to strengthen the ailing currency. The dong has fallen 21% against the dollar in the last five years alone.

“The gold policy really is to help stabilize the dong, because if people hold less gold, they don’t try to move away from the dong,” said Alan Pham, chief economist at VinaCapital Group. “The side effect of that policy is increasing the amount of capital. That’s like hitting two birds with one stone.”

The move is similar to attempts by the Indian government to discourage gold investing . Indian officials have raised gold duties to discourage trade. Gold imports have since fallen.

Once a slide begins, national governments find it troublesome to improve the market value of a national currency. That usually involves stabilizing the money supply and encouraging free market growth. Stabilizing the local currency also means credit crunch… which can make your local government officials, well, unpopular. It’s much easier to crush alternatives by force so that the fiat option is the only one available.

Unfortunately, in Vietnam, the policy has been effective. Gold imports have fallen 24%, and trade with gold bullion has diminished. Yet inflation in Vietnam continues, having risen to almost 7% in June. For holders of the dong, the story is not over yet.

P.S. The currency wars currently being waged across the globe could have an enormous impact on the economy at home… and your finances. Subscribe today and stay up-to-date. Click here.