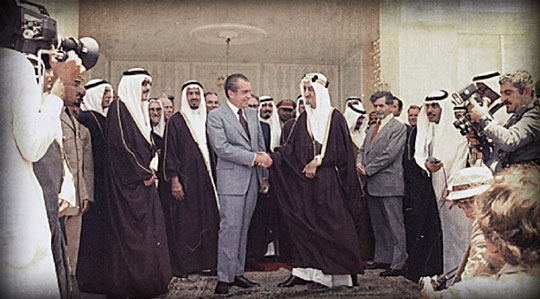 No Iran Deal, No Petrodollar

Since 1974, the world has run on “petrodollars.” Now the cracks are starting to widen…

The petrodollar arose from the ashes of the Bretton Woods system after President Nixon cut the dollar’s last tie to gold in 1971.

In the immediate post-World War II years, Bretton Woods made the dollar the world’s reserve currency — the go-to currency for cross-border transactions. If you were a foreign government or central bank, the dollar was as good as gold — for every $35 you turned in to the U.S. Treasury, you received one ounce of gold.

Chances are you know the rest of the story: Foreigners recognized Washington was printing too many dollars, the French wanted more gold than Washington was willing to give up and Nixon “closed the gold window.”

But without gold, what would continue to cement the dollar’s position as the world’s reserve currency? The “full faith and credit” of the U.S. government.

Even the “imperial president” knew that wasn’t enough.

After the “oil shock” of 1973-74, in which oil prices shot up from $3 a barrel to $12, Nixon’s Secretary of State Henry Kissinger got an idea and convinced the Saudi royal family to buy in.

The deal went like this: Saudi Arabia would price oil in U.S. dollars and use its clout to get other OPEC nations to do the same. In return, the U.S. government agreed to protect Saudi Arabia and its allies against foreign invaders and domestic rebellions.

The appeal for the House of Saud was obvious — the weight of the U.S. military would keep the family’s 7,000 princes living in the style to which they’d become accustomed.

The appeal for Washington was more subtle — but no less important. Anyone who wanted to buy oil now needed dollars to do so. That meant perpetual demand for dollars and a cycle that goes like this…

“This gave the dollar a special place among world currencies, and in essence ‘backed’ the dollar with oil,” explained Rep. Ron Paul in a prescient speech on the floor of the U.S. House in 2006. “The arrangement gave the dollar artificial strength, with tremendous financial benefits for the United States. It allowed us to export our monetary inflation by buying oil and other goods at a great discount as dollar influence flourished.”

Then came his forecast: “The economic law that honest exchange demands only things of real value as currency cannot be repealed. The chaos that one day will ensue from our 35-year experiment with worldwide fiat money will require a return to money of real value. We will know that day is approaching when oil-producing countries demand gold, or its equivalent, for their oil, rather than dollars or euros.”

P.S. “The petrodollar deal worked beautifully for 30 years,” explained Jim Rickards in early 2014. “Through the ’80s, the ’90s and early 2000s, it really did prop up the dollar. But in December 2013, President Obama reneged on the deal. He engaged in the beginning of a detente with Iran, which is a bitter enemy of Saudi Arabia. So the U.S. is saying to Iran, ‘Hey, you’re our cop on the beat and our best friend in the Middle East. This was a stab in the back to the Saudis. By the way, Saudi Arabia sells most of its oil today to China, not the United States. So how long will it be until they start accepting yuan or gold for oil?” Guest Finian Cunningham takes a guess, right here.