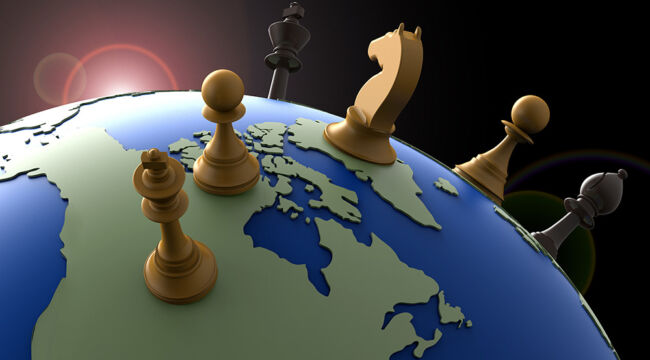 What do you think is America’s most serious geopolitical challenge — China, Russia, Iran, maybe North Korea?

None of the above, apparently. According to President Biden’s Director of National Intelligence, Avril Haines, climate change needs to be “at the center” of countries’ national security and foreign policy.

Well, Treasury Secretary Janet Yellen will be doing her best to make sure the crusade against climate change gets plenty of funding.

In other words, climate alarmism is the official position of the Biden administration.

Alarmism has no basis in observable science. It’s all the result of climate models, which have been consistently wrong about warming because they reflect the biases of their programmers.

Garbage in, garbage out.

They’re kind of like the climate’s version of the Fed’s economic models. They’re always wrong, and not by a little.

If you listen to the climate alarmists, they’ll tell you we only have a few years to save the planet. If we don’t eliminate CO2 emissions quickly, the planet will warm, sea levels will rise, storms will intensify, cities will be inundated, and lives will be lost to starvation, disease and dehydration.

Every one of those claims is empirically false, but that doesn’t stop the global power elite from trying to shut down the oil and gas industries and replace power generation with solar, wind and hydropower or so-called renewable sources.

The War Against Plants

Here are the facts: The best evidence is that the planet is not warming, but it may be cooling under the influence of a periodic minimum in solar flare activity and increased volcanic activity (the two may actually be related), which creates an atmospheric ash layer that cuts down on sun intensity.

Sea levels may be rising slightly, but the tempo is about 7 inches in the next 100 years. That’s hardly cause for alarm considering that sea levels rose 400 feet since the end of the last ice age, and humans adapted just fine.

CO2 is a trace gas that makes up just 0.04% of the atmosphere (400 parts per million) and doesn’t have a major impact as far as science can tell, except that it is essential for plant nourishment.

Based upon recent studies, a doubling of carbon dioxide would likely result in a temperature increase of only about 1.5 degrees Celsius. That’s hardly a crisis.

There is some danger that if CO2 levels are reduced too much, plant life may suffer. The reason hurricanes are producing more property damage is not because the storms are more intense – peak intensity in the past hundred years was in the 1940s – it’s because fools with federally subsidized flood insurance are building mansions on sand bars where they don’t belong and the mansions get blown away in predictable storms.

The Polar Bears Are Getting Fat

Remember when the same climate alarmists said in 1988 that the New York City subways would be flooded by 2010? Never happened. The polar bears are also doing just fine.

Recent reports show the polar bear population is thriving, and one report showed that polar bear obesity is an emerging problem because the bears have so much to eat.

Yet, the claims of the alarmists are even worse than junk science. Even further, the “solution” to these non-problems doesn’t work either. Simply put, solar and wind power cannot replace oil and gas in producing electricity to supply the grid.

This is because solar and wind are unreliable. When the wind doesn’t blow and the sun doesn’t shine (which is often in most places), there is no power output at all.

The only way to overcome the reliability problem is with immensely expensive batteries. And battery production itself uses up enormous amounts of electricity, poisonous chemicals, and metals, creating disposal problems.

Solar and wind can be supplemented by oil and gas (and nuclear power), but they cannot replace them due to unreliability and the expense of batteries.

And do you think you’re going green by driving an electric car? Well, research by the Swedish Environment Institute reveals that up to 17.5 tons of carbon dioxide go into producing an electric battery.

If you keep the car for 10 years or longer, the battery will have to be replaced, meaning another 17.5 tons of carbon dioxide.

And electric charging stations largely depend on fossil fuels to generate electricity.

In comparison, a standard internal combustion engine might produce about 45 tons of carbon dioxide after 160,000 miles, about 16 years of use on average.

But the Biden administration seems determined to push the Green New Deal anyway, despite all the costs and little benefit.

Get ready for higher energy costs, power outages, death and damage from cold spells, and possible lines at the gasoline pump. The Green New Deal is a policy fiasco in the making that will take us back to the 1970s.

Of course, many corporations are fully on board with the environmental agenda because it means subsidies and tax breaks if they adopt the right policies.

Have you heard about ESG investing?

If not, you soon will. ESG stands for Environmental, Social and Governance, which are the three factors business managers and investment advisors are implored to take into account when making business and asset allocation decisions.

Making the environment better, improving society and ensuring good governance outside the boardroom was considered to be the job of government, civil society or not-for-profit entities. Companies were all about the bottom line. Not anymore.

Because of their wealth, scope and influence, companies have been hijacked by the power elite and ideologues to carry water for a host of social programs and causes from public housing and education to climate change.

Maybe that’s good overall, maybe it’s not. Regardless, what one thinks of this evolution in the purpose of a corporation is irrelevant; it’s happening, and investors need to take it into account because it can be extremely profitable.

Assets under management in ESG funds are now over $2 trillion, more than the largest sovereign wealth funds. These funds and large asset managers such as BlackRock are scouring the corporate landscape for companies that meet their ESG investment criteria.

Since there is a scarcity of attractive ESG companies relative to the funds chasing ESG investments, the stocks of good candidates are likely to outperform. Funds are also putting pressure on corporate management to conform existing corporate practices to ESG measurements or face shareholder revolts.

Since the ESG target companies are overwhelmingly green (in areas of solar and wind power, recycling and efficient construction), investors may find even better opportunities in blue projects involving water recycling, irrigation, and cutting-edge vertical farming.

Again, whether you agree with the new model or not is irrelevant. It’s happening anyway.

These trends are just beginning, so there’s still time for investors to jump on the red-hot green and blue bandwagon and put their portfolios in the black.