5 Things to Watch For: World Money, OPEC, Elections and More

At the Daily Reckoning we have filtered through the economic noise to bring you what to watch for in financial news this week.

Otmar Issing was the European Central Bank’s first chief economist and has warned about the impact of negative interest rates. He noted that the ECB and the EU is hindering the recovery of banks, “If it persists for longer, then I think we will see dramatic consequences for insurance companies and pension schemes.” Furthermore, “the longer zero interest rates continue, the more difficult it will be to exit from this situation.”

This is important because, from an insider perspective, the threat of Europe splitting would impact the global economy on trade, investment and the flow of money.

International investors purchasing Chinese bonds are predicted to increase more than four times the current amount over the next two years according to a Chinese state-run media outlet. Chinese monetary authorities, accompanied by other international organizations, will lead buying of about $48 billion from 2017 to 2018 (four times the $12 billion of last year). The Chinese media outlet cited China’s entrance into the International Monetary Fund’s special drawing rights (or what Jim Rickards has defined as world money) on October 1st but has seen minimal impact.

It then noted with regards to world money that “SDR-driven inflows are already showing signs of picking up, with foreign investors’ holdings of Chinese onshore sovereign debt rising a record $6 billion in September…”  This unfolding news is key to stay vigilant on because as the new world money develops, it will impact the strength of the dollar and how the international community trades currency. 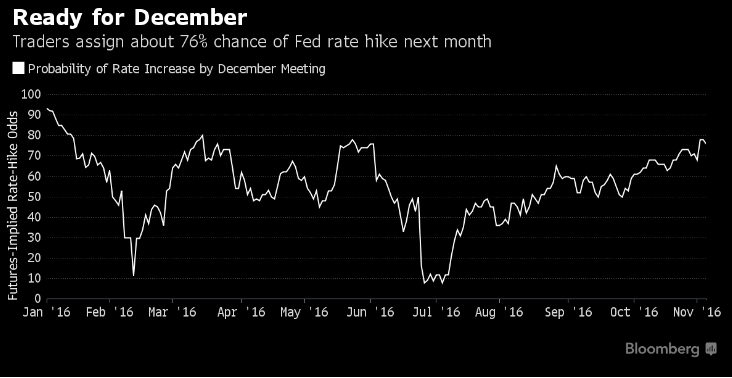 Investor consensus, according to the mainstream take, has a December interest-rate hike as the increased probability after signals from the Federal Reserve over the past two months.  After the government released economic data that the Fed views as credible indicators (wage growth, jobs, etc) even the Fed noted in its November 2nd meeting that it had a higher case for action. The market absolutely hates uncertainty and in light of a “Trump surprise” this story, the probability of a rate hike, and how the market adjusts is one to watch.

Jim Rickards has noted that regardless of who wins the election, a rate hike is imminent and to not expect the Fed to act in an effort to simply play to the markets demand.

While all of the noise around the US election continues, OPEC is set to meet this month.  At the OPEC head of state meeting questions over pricing, market supply and whether the cartel will limit output are scheduled to be front and center in the media.  Tyler Durden poses the question of why exactly investors should take the aging oil organization seriously, and notes that it has lackluster impact.

The analysis offered by Durden does note that, “If a production freeze is reached on November 30, it will be a small miracle and could send prices back up above $50. But it is likely the criticisms of OPEC and doubts about its continued relevance will only grow.”  This story is likely to escalate after the election results and speculation over its impact will undoubtedly impact oil trading.

Regardless of How America Votes, Americans Want a Different Foreign Policy (Ron Paul)

Starting on November 9th (or whenever official election results are confirmed) policy papers for the president elect will be proposed.  Dr. Ron Paul notes that, “Claiming we must protect our “interests” overseas really means using the US military to benefit special interests. That is not what the military is for. We must stick to our non-interventionist guns. No more regime change. No more covert destabilization programs overseas. A solid defense budget, not an imperial military budget. US troops home now. End US military action in Syria, Iraq, Afghanistan, Somalia, and so on. Just come home.”

Maintaining diligent observations on these policy initiatives in the coming weeks and months will be a primary way to understand what foreign policy will be for the next administration.