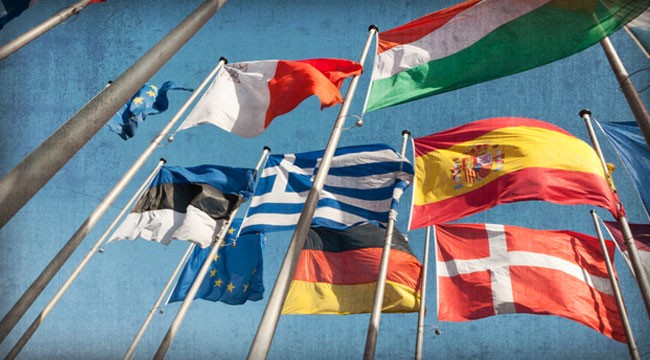 [In keeping with our 2015 forecast theme this week, James Howard Kunstler’s second installment explained how the banking and oil sectors of the U.S. economy are still just ponzi schemes, waiting to collapse. Now, he continues with part III, giving his forecasts from Greece to Gold and QE to mischief in the middle east. Read on…]

Here are my financial forecast particulars for 2015:

The signal event of 2015 will be the disintegration of Tom Friedman’s global economy, the trade and banking relations we have known for about a quarter century, especially the frictionless flow of goods and capital between East and West. The tactical blunders of the USA and its Euro-partners drive the so-called emerging markets, led by China’s Shanghai Cooperation Organization, into a skein of work-arounds to undermine and avoid the US dollar trade. They don’t exactly replace the dollar as the world’s reserve currency but the workarounds lead to a period of worldwide currency turmoil that can only be resolved by monies being at least partially backed by gold. Both China and Russia will continue to work to convert their dollar reserves into Gold whenever possible. Meanwhile, America and Great Britain’s campaign to discredit and devalue gold will only permit their rivals to acquire more at a cheaper price.

The rest of the world is sick of America’s interventionist shenanigans and its moronic exported culture of burgers, Grand Theft Auto, and twerking Jezebels. They are aided by America’s own obdurate foolishness and poor strategic choices, for instance the blowback from the Ukraine misadventure of 2014. Who in the White House, Pentagon, or State Department thought it was a great idea to undermine the fragile stability of Ukraine? Is there any question that Ukraine was ever not in Russia’s sphere of influence? Or that Russia would allow it to be dragooned into NATO and used as a forward base for American firepower? Dmitry Orlov’s explanation for all this is the most cogent on the web:

“What the Anglo-imperialists were paying for in corrupting Ukraine’s politics was a ring-side seat at a fight between Ukraine and Russia. And what they got instead is a two-legged stool at a bar-room brawl between Eastern and Western Ukraine.”

We succeeded in turning a marginally-bankrupt, marginally-independent nation into a complete basketcase that is going Dark Age as I write — no money, no work, no fuel, no heat, no food, no prospects. Having completely botched the operation, and misplayed the game against Russia’s Putin — and Russia’s legitimate interest in a stable next-door neighbor — the US will now abandon Ukraine. It will be forgotten as surely as the US-sponsored Ukrainian air force’s role in the crash of Malaysian Airlines Flight 17 — the incriminating details of which were buried by the Dutch investigating officials. Eventually, the Russians will have to care for the dying Ukraine. They will not be enthusiastic about it. They will do little and do it slowly.

Likewise our economic sanctions campaign against Russia (including the attack on the ruble) is now blowing back on the Eurozone’s export economy. Russia has survived much worse than Western sanctions in recent history. Russia will survive by turning east to Asia. This is already happening and is well publicized. What it means for Europe sooner than later is the loss of their access to imported oil and gas from Russia.

The blowback of Europe’s foolish partnership with the US campaign to punish Russia can only discredit the ruling parties and boost new right-wing parties such as France’s National Front and Britain’s UK Independence Party, both deeply nationalistic, anti Euro Union, and anti endless immigration.

The Islamic State was another legacy of blowback from American foreign adventurism. It was spawned out of the remnants of Al Qaeda in poor, broken Iraq and its conquests in 2014 ranged clear across northern Syria to several major cities in Iraq (Faluja, Tikrit, Mosul) right up to the suburbs of Baghdad. They made a lot of money off of captured oil wells and ransoming western hostages, and they shocked Western decency with their YouTube decapitations of hostages that the US and UK refused to ransom. The US’s response now is to bomb their installations and bivouacs. That can only drive them, literally, underground. IS will thrive on Western punishment. It has vast potential to recruit the population of idle, under-employed young men all across North Africa and the Middle East, and beyond to Europe and the band of Islamic society that stretches below Russia across mid-Asia. The catch is, if and when they come to actually rule most of these territories, they will be running economies reduced to Dark Age levels.

As I write, King Abdullah of Saudi Arabia has just entered the hospital. At 91, he is closer to the end of his story than the middle. Meanwhile, the tanking of crude oil prices has critically impaired an Arabian economy that depends on oil sales for more than 80 percent of its operating revenue. Much of that revenue goes to a national welfare system that pays just about everybody to not work. There will be a lot less money to go around now and a lot of grievance over it. The population of the Arabian Peninsula is so far beyond critical overshoot that the situation can only get ugly, especially since a large part of that excessive population consists of testosterone-jacked young men under 30 with nothing to occupy their hours but chitchat over tea and religious mummery. Consider also that when King Abdullah goes, there is liable to be a deeply destabilizing fight for the throne among the hordes of princes and competing clans — despite whomever Abdullah has named as his successor. You may be sure the Islamic State will be standing by to add fuel to those fires. That, in and of itself, could bring on a fast end of the oil age. Bear in mind, too, that the eastern side of Saudi Arabia, where most of the oil infrastructure is, contains a majority Shi’ite population. In a conflict between Sunni IS and Iran-backed Arabian Shia, a lot of stuff could just get blown up. At the least, itr could badly interrupt 30 percent of the world’s oil supply.

China is obviously struggling to prevent a financial freefall brought on by 20-plus years of extravagant debt creation and a lot mal-investment in the service of a very late entry into the techno-industrial frolic. It can’t be denied that they made a good show of it in a very short time, but they got in at the blow-off stage. Now conditions are changing unfavorably. The global economy that made China the world’s workshop is unwinding in a vortex of currency war, trade friction, territorial dispute, ethnic ill-will, and the disturbances that attend the great background problem of peak cheap oil.

The Chinese will work sedulously to try for a soft landing in the great economic contraction that looms. Chinese banking being non-transparent, overly subject to blundering central control, and deeply corrupt, may not bode well for that project. However, China has many cushions to fall back on short-term in the form of foreign money reserves and stockpiles of raw materials. But sooner or later they have to reckon with their dependence on continued oil imports. That is clearly the basis of China’s current flirtation with Russia — but with Russia arguably past its own oil production peak, that’s not a long-term strategy. China has cranked up the world’s mightiest production line of photovoltaic hardware, but solar won’t replace oil the way things currently run, and whatever they rig up may not last more than one generation if there’s no supporting platform of an oil economy for the manufacture of solar replacement parts.

Japan’s suicidal experiment with hyper-turbo ZIRP and QE is not accomplishing much except exacerbating global currency carry trades and driving down the nation’s standard of living. It may succeed in destroying the Yen and what remains of its economy in 2015. Fukushima remains unresolved and Japan’s energy future looks plain dismal. They have no energy resources of their own whatsoever. Any serious mischief in the Middle East oil fields will finish them off. The nation has been on the fast track to become the first post-industrial neo-medieval society. They could be fortunate to land back there and set up their shop while there are still residual riches in the world to work with. They might also go cuckoo and start a war with China for control over the oil fields of the South China sea. It is hard to see any other outcome from such a conflict other than China kicking Japan’s ass.

P.S. To bring us back home, click here to read the fourth and final Forecast 2015 installment on the USA Homefront.