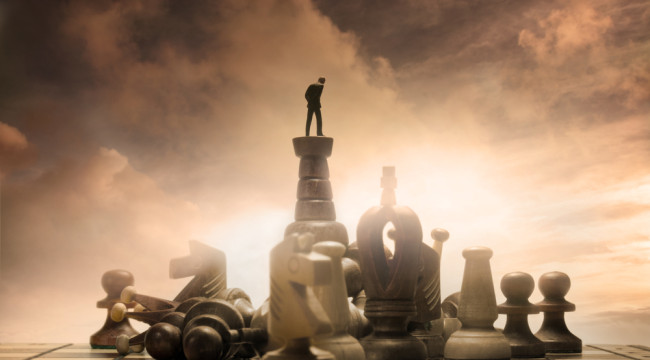 A tax overhaul once believed by markets to be easier legislation to pass is now facing intraparty divisions. Tax reform may not be as simple as markets have anticipated — and could spell real disaster for the economy.

After three decades, Republicans are looking to enact a major tax overhaul. The expectation is that by holding power in both Congress and the White House, the GOP will be able to deliver in expedited fashion.

The last time that Congress had significant tax reform was in 1986 under Reagan.

House Representative Kevin Brady, R-Texas, chairman of the tax-writing Ways and Means Committee, remained steadfast, “As challenging as tax reform can be, we have, I think, all the elements in place to deliver better than Reagan reforms going forward.”

However, after the most recent healthcare collapse, a “layup” shot for Republicans is needed to garner momentum again.

Tax cuts are simple, actual tax reform is not.

Treasury Secretary Steve Mnuchin while speaking in Washington, D.C noted that he felt tax reform would be “a lot simpler” in contrast to what turned into a divided GOP over health replacement.

In his timeline, the Treasury Secretary projects that he expects comprehensive reform to be complete by August. Accordingly, that is when Congress is due to go on recess and return to their respective districts.

That may be a rather ambitious timeline, but the devil is in the details.

After going deep into the weeds on the GOP’s desire to overhaul the tax system what you find is a much more complex system. One that would seemingly not be completed before the Fall. 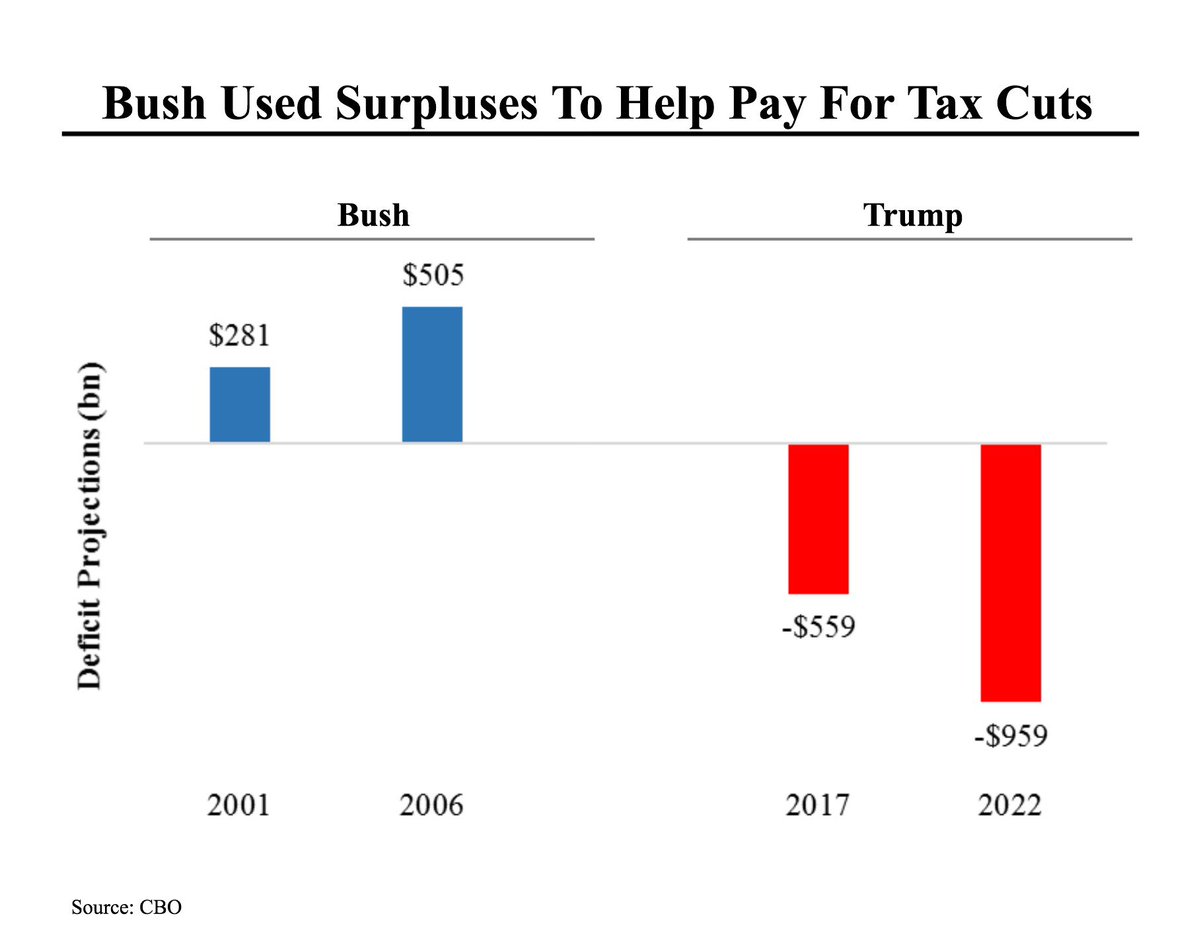 The Congressional Budget Office figures above show the conditions present under President George W. Bush, the last to attempt a major tax cut, are not anywhere close to what President Trump and Congress face today.

What does that mean? A potential reduction in government revenues could boost a fervent rise in the national debt.

The ultimate GOP objective is to reduce the burden of the federal debt. This would require a tax trade-off if Congress was to not place a greater burden on that debt.

Many within the Republican rank-and-file have pointed to a “revenue-neutral” plan that would ultimately draw in as much money as the current tax system does.

During an interview on This Week with George Stephanopoulos, House Representative Mark Meadows, chairman of the conservative House Freedom Caucus broke step saying,

“Does it have to be, what they would say, revenue neutral? Or do you have to have an offset like with the border adjustment tax?”

Rep. Meadows who was strongly against the proposed GOP health care bill went on to note, “I think there’s been a lot of flexibility in terms of some of my contacts in conservatives in terms of not making it totally offset…”

What that border adjustment tax (BAT) would mean is a tax on imports with exemptions for exports. However, the GOP appears to be at complete odds with whether this approach would actually provide any real positive impact to the projected tax plan (let alone its impact on raising the price on goods like clothing, electronics and even oil).

The White House has offered mixed messages on the BAT, an area that was initially thought to be an easily backed policy.

President Trump while speaking to Reuters on the BAT said “It could lead to a lot more jobs in the United States.”

Less than a day later Gary Cohn, Trump’s chief economic advisor and former Goldman Sachs president, told David Rubenstein during an interview at The Business Council that the White House is not in support of the version of the BAT that is currently proposed by the House.

A house divided is a party on the fringe. Misdirection is dangerous in a market that hinges closely on signals from government leadership.

That type of confusion and divergence is currently what continues to emerge from the current plan in Congress.

Even with the tax on imports and exemption on exports that is believed to raise nearly $1 trillion in rate cuts, more will be needed.

What else is left if a revenue-neutral budget is to be met? A likely target then becomes tax breaks.

Business deductions of interest on debt currently allows for the private sector to have significant tax breaks. State and local municipalities have also maintained deductions in annual tax owed.

These two options would likely go away or be significantly altered in a trade-off for revenue-neutral spending.

The trade-off question then becomes two fold. Are there enough members in Congress willing to let such tax breaks be revoked from their constituency? Would businesses be hurt if the cuts are only temporary?

There is a version of tax reform that based on deductions, could present a bipartisan option.

As Jim Rickards, a leading economic analyst and tax lawyer notes, “Tax cuts will be paid for with tax increases elsewhere or imaginary savings that will increase the deficit and imperil the U.S. credit standing with non-sustainable debt-to-GDP ratios.”

The markets dream of a “Trumpflation trade” seems to be fading, and fast.

After the failure of President Trump to push through a health care bill, questions have risen over whether any BAT, trade-off or other aspects of a tax overhaul are even possible?

The U.S dollar has currently slumped to its lowest level since last November.

Gold, an area many consider to be a safe haven for investments, has shot up to a one month high.

In the immediate aftermath the GOP leadership failure to “repeal and replace” the Affordable Care Act, investors have begun to cross-examine the expectations on “pro-growth policies.” 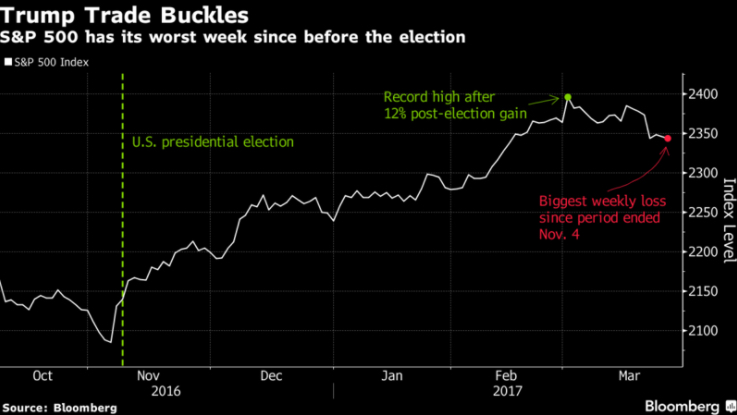 The Trumpflation trade that once was boosted by the idea of tax reform could now be triggering an even more dangerous forecast for the future.

With a debt ceiling looming, the threat of a tax reform failure and possible government shutdown could present a very negative chain reaction in markets.

As one top Republican reported on the posing risks of a tax failure and government closure being “more likely than not… Wall Street is not expecting a shutdown and the markets are unprepared.”

Enter David Stockman.  Applying his budgetary experience he ran the fiscal numbers and pushed back yesterday, “you ain’t seen nothing yet.”

Stockman, a former GOP Congressman who also served as Reagan’s budget director warns, “it now appears that the casino is beginning to get the message based on modest sell-offs beginning last week. But do not wait for the talking heads to signal the all-clear and that it’s again time to buy-the-dip.”

“It’s just another warning sign that reality is closing in on the great financial fantasy of our times. Getting out of the casino with all deliberate haste is the only prudent thing left to do.”