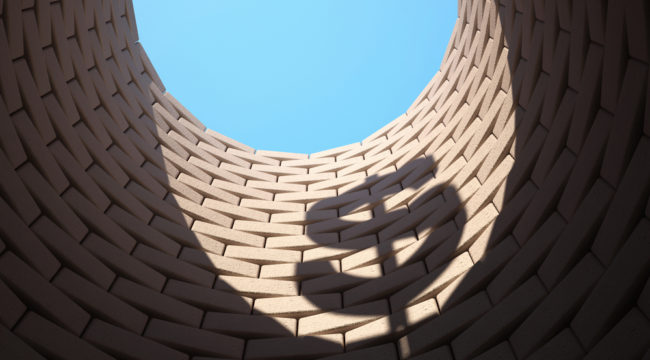 The “you ain’t seen nothing yet” rule applies from here on out.

The GOP was unified on Obamacare “repeal” but completely fractured on “replace,” both on policy philosophy and fiscal cost.

That particular chapter of  the “replace” saga, however,  is chicken feed compared to finding a coherent majority on measures to “replace” the $4 trillion of revenue loss from the corporate and individual tax cuts promised by Trump and embraced widely by the GOP rank and file.

Wall Street has been drooling about the prospect of cutting the corporate rate to 20% and other related corporate tax reforms. These measures would reduce revenue by $2.1 trillion over a decade.

On top of that, there’s the revenue loss from lowering the top individual tax rate to 33%, collapsing the tax brackets from seven down to three (33% 25% and 12%) and raising the standard deduction.

That’s another $2 trillionof Federal receipts gone missing over the next decade, thereby widening the fiscal hole to the above mentioned$4 trillion.

Good luck with that, as the kids say. So with a $4 trillion funding hold, the Trump Stimulus is heading for oblivion.

The Trump White House and purported GOP majority on Capitol Hill are structurally incapable of cutting even $1 from the Federal government’s current $4.2 trillion annual spending level.

That’s right. I’m not being figurative here. I mean that the motley ruling party on display Friday afternoon is literally incapable of cutting one single net dollar of Federal spending from the current built-in baseline.

In a word, Trump’s $54 billionper year defense increase will more than exceed any potential cuts in discretionary spending that the fragile GOP majorities could agree upon. At the same time, 80% of non-defense spending is accounted for by entitlements and interest payments.

Trump has taken the former off the table, of course, while the latter is untouchable.

In short, the vaunted pivot to “tax cuts” purportedly now underway is equivalent to that of a pole-vaulter unaware of the fact that on the far side of the bar is a pit with virtually no bottom.

That is to say, repealing taxes is even easier to advocate than repealing Obamacare, but replacing the $4 trillionrevenue loss is next to impossible.

What this boils down to is that the Trump/GOP government has a $4 trillion promiseand virtually zero capacity to fund it. And that fiscal hole is absolutely real because the GOP Congressional leaders’ insistence that the tax bill must be “deficit neutral” is more than warranted.

Indeed, the whole tax cutting charade is being conducted atop a fiscal volcano that is already rumbling with anticipatory temblors.

As shown below, under the Congressional Budget Office’s (CBO) current law projections issued in January, the Federal deficit is set to soar based on the explosion of entitlement and medical spending relative to revenue growth, and will reach $1.4 trillionper year by 2027. That means that over the 10-year period nearly $10 trillion would be added to the public debt.

Moreover, that’s just the happy time view of the fiscal outlook.  The CBO projections are based on the absurd economic assumption that the there will be no U.S. recession for 206 months running (e.g. between June 2009 and September 2027).

That has never happened in human history, and is twice the business cycle expansion of 119 months that occurred during Greenspan’s unsustainable tech and dotcom boom of the 1990s.

Additionally, Congress has learned every trick in the budget accounting books about how to make the out-year deficit appear lower than it actually is so that it can keep kicking the debt monster down the road.

Thus, even Brookings Institution has dropped a dime on the CBO by calling out the accounting games it feels necessary to accommodate in its long range projections. By using a concept called “current services” (which is what we always used back in the day), which projects Congress’actual policies over the 10-year horizon, Brookings concluded that even under CBO’s Rosy Scenario economic assumptions, the cumulative deficit will actually total $11.4 trillionover the period.

The reason is simple. The Brookings revision just removed all the “make pretends” from the CBO projection, such as the fact that upwards of$850 billionof tax measures are counted in the CBO revenue baseline that will never materialize in the real world.

That’s because Congress habitually postpones the effective date of certain Obamacare tax increases (e.g. the tanning tax and the levy on medical devices) or extends at the last minute a huge range of tax “incentives” that are conveniently scheduled to “expire” several years down the road, but never do. The wind energy credit boondoggle is one case in point.

In sum, the Trump/GOP coalition is in a massive inherited debt trap, and therefore has zero wiggle room to enact the kind of sweeping, deficit-financed Reaganesque tax cuts that Wall Street is peddling to the homegamers in order to herd them to the slaughter one last time.

Indeed, even setting aside the CBO’s drastic undercount of the real outyear deficit path, its January update contains a singular number that demonstrates why this week’s pivot to tax cutting will quickly degenerate into a legislative tailspin.

That number is well over $30 trillionand is found on page 29 of the report. It’s CBO’s official projection of the total public debt in 2027 before a single dime of the Trump/GOP tax cut is paid for. 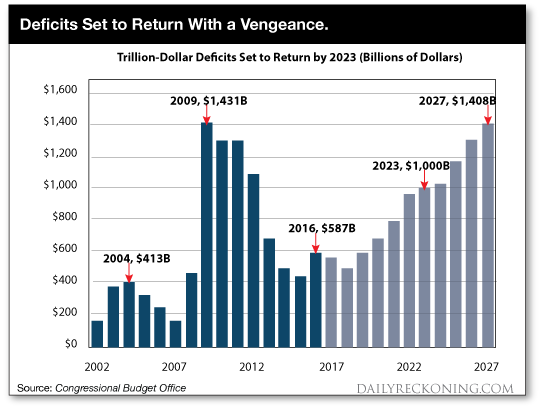 Here’s the skunk in the woodpile…

Congress can’t even start the tax cutting process until both Houses have passed a 10-year budget resolutionfor FY 2018, which contains “reconciliation instructions” on the magnitude of the tax cuts and the basket of “payfors” that would off-set a major share of the revenue loss.

On this front, the White House is even more clueless than it was on Obamacare repeal and replace. In recent days, for example, the S&L guy at the Treasury Department, Steve Mnuchin, has been insisting that the tax cuts could be enacted by the August recess — even if that is on the ambitious side by his own reckoning.

No, that is pure rookie gibberish. Before giving any consideration to spending cuts or so-called dynamic forecasting of revenue “reflows” from tax cuts, the House GOP would have to pass a budget resolution that increased the public debt to $34 trillion and left a $2 trillion or 7.5% of GDPdeficit by 2027.

That’s not going to happen in a million years — let alone by the August recess. And spending cuts and revenue reflows will not materially mitigate that reality.

In any event, it now appears that the casino is beginning to get the message based on the modest sell-off today and last week. But do not wait for the talking heads of bubblevision to signal the all-clear and that it’s again time to buy-the-dip.

Actually, it’s just another warning sign that reality is closing in on the great financial fantasy of our times, and that getting out of the casino with all deliberate haste is the only prudent thing left to do.