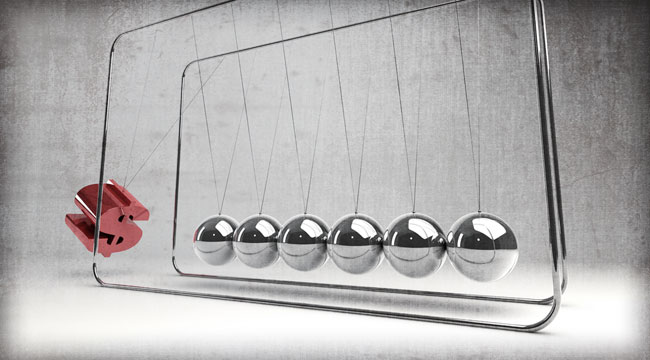 Danger: Mad Scientists Are Experimenting With Your Money

Don’t fight the Fed. That’s what they say on Wall Street. And for good reason. While technically accountable to Congress, the Federal Reserve’s monetary policy decisions do not require approval from “the president or anyone else”, as the Fed boldly states on their website.

The Fed’s culture of omnipotence is evident in former Chairman Alan Greenspan’s reply when asked about the Fed’s relationship with the president. “Quite frankly it does not matter who is president as far as the Fed is concerned. There are no other agencies that can overrule the action we take.”

So the most influential financial institution in the world is run by a bunch of theorists with absolute authority to experiment to their hearts’ content.

From the outside looking in, this appears to be precisely what’s happening. Since Greenspan took control in August 1987, the Fed seems to have become a giant economics laboratory.

It’s not hard to imagine Federal Reserve chairmen in lab coats mixing “eye of newt and tongue of dog” behind the closed doors of the Eccles Building (the Fed’s Washington home). Perhaps I am being harsh. But considering their track record, you can cut me some slack for thinking their approach to economic management harebrained.

All of their tinkering seems to have one aim: to repeal the business cycle. Expansion and contraction are natural economic forces. Yet, they have no part in the Fed’s economic model. Instead, these mad scientists prefer only expansion, and more of it.

Exuberance followed by crisis has been the order of the day for the past 25 years. But we’re being told that this time is different. The official message is that the Fed and the other sycophant central bankers actually know what they’re doing this time around, that everything’s trending in the right direction.

But the fact is that the world’s central bankers have gone way past the boundaries of their predecessors as they recklessly experiment to reflate an ailing economy.

We don’t know where it will all lead. But we do know that their previous experiments have all failed. Odds are they’ll fail again… but on a grander scale.

Since Greenspan took control in August 1987, the Fed seems to have become a giant economics laboratory.

The following chart from the Federal Reserve Economic Data (FRED) shows the return on corporate high yield bonds is at an all time low. 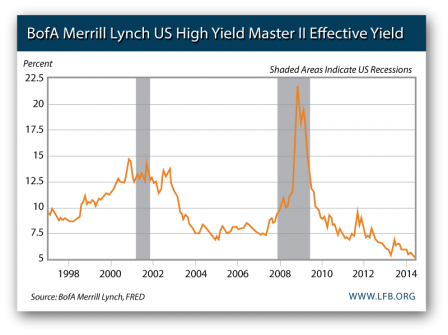 Why is this important?

With the Fed experimenting with near zero interest rates, investors have been forced to flee the safety of cash in pursuit of anything that pays a return. And that includes investments of dubious quality.

At the height of the global financial crisis, when fear prevailed, junk bond yields soared to 22% as investors demanded a high return to compensate for the risk of corporate default.

Five years later, it appears the risk has been forgotten, and cash hungry corporations have been eager to offer debt funded instruments to the hordes of yield starved investors.

Corporate debt levels in the U.S. are high (though not quite as high as China’s). The quality of the debt is low. And the return to investors is pitiful given the inherent risks of the investment. It’s a disaster waiting to happen. There are similar high yield offerings in Australia with mortgage funds and property syndicates, which frequently disappoint during the dark side of the investment cycle.

For five years, the Fed’s interest rate policy has forced investors to pursue investment options they would not otherwise consider. All this experimentation and massive misappropriation of capital is going to create one hell of a lab explosion.

But don’t count on a rescue package for savers.

Whereas between 2008 and 2010, it was the banks — the same ones that aided and abetted the Fed’s dangerous credit expansion policies — that were handed $16 trillion in newly minted bailout money.

Talk about screwed up priorities.

Central bankers are at the forefront of public policy. Their every utterance is dissected. So it’s far from comforting to hear that a senior Fed official privately revealed to The Death of Money author Jim Rickards that the world’s most influential economic institution is “making it up as they go”.

In case you haven’t been paying attention, here’s what the Fed’s been up to in recent years:

The Official Monetary and Financial Institutions Forum latest report, which focussed on the investments of 157 central banks, 156 public pension funds and 87 sovereign funds, revealed that the central banks of China, Switzerland and Italy have been buying billions of dollars’ worth of shares.

The report stated, “A cluster of central banking investors has become major players on world equity markets. [The trend] could potentially contribute to overheated asset prices.”

Simply put, central bankers are manipulating the market on an unprecedented scale.

Previous (less intrusive) central bank experiments in economic stability have all failed. Why should we expect anything different this time around? We shouldn’t — except, perhaps, that the consequences will be more spectacular and far-reaching than after previous failures.

Market forces cannot be tamed indefinitely — even by the central bankers.

Considering the unprecedented manipulation, the next market correction could be so severe and the damage to the economy so deep that the perpetrators, who’ve thus far suffered no accountability, may finally find themselves subject to trial by public ordeal.

But public outrage won’t restore the capital lost by those who practice voodoo economics and believe in wealth creation out of thin air.

An ounce of prevention is worth a pound of cure, or in this case a ton. Take the time now to build a defensive portfolio that can withstand a potential market fallout far greater than the GFC.

Ed. Note: There are practical ways to make a lot of money and live your life free from the problems of Washington and Wall Street. The best way to do that is to stay one step ahead of their schemes to undermine your wealth. And if you were a reader of the FREE Laissez Faire Today email edition, you would have discovered their latest plan to destroy the last remaining value in your money. Click here and subscribe for FREE so you don’t miss out on future alerts.