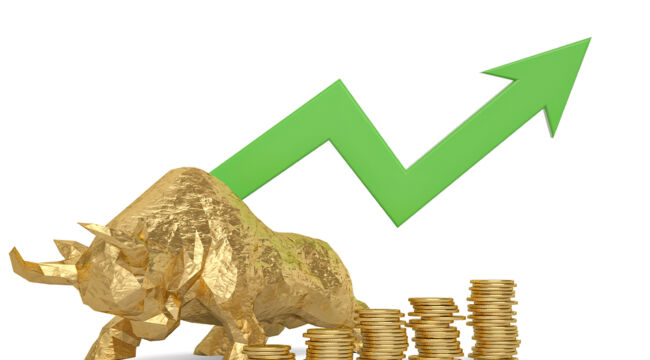 After a multi-month correction in gold, fear and frustration are apparent among gold investors. But today, I’d like to present a case for sticking with gold. Here it is in a nutshell:

As long as politicians spend wildly and the Fed keeps monetary policy loose, the case for gold will remain compelling. And both are likely to continue for a long time.

It also has to do with supply. The amount of gold supply available on the market at any given time represents a tiny fraction of the potential demand for that gold.

If investment demand for gold surges, prices can spike rapidly before additional supply can hit the market.

Unlike dollars, you can’t create gold at the stroke of a computer key.

So future flows of money from stocks and bonds into gold could push gold prices up at an exponential rate.

Additionally, the Fed has made it clear it will continue to keep rates at zero and maintain monthly asset purchases for a while.

It can’t really afford to tighten policy without jeopardizing markets and the economic recovery, which depend on super-low interest rates. Therefore, the Fed must maintain a low-rate environment.

As long as the Fed maintains loose policies, the case for gold will get better by the day.

The Problem of Rising Yields

Longer-dated Treasury yields have fallen over the past week but are still up substantially so far this year.

30-year Treasury yields have followed a similar pattern. They started the year at 1.65% and today are up to 2.34%.

The Fed wants to keep a lid on yields because they strongly influence interest rates, which the Fed also wants to keep low to stimulate the economy.

What will the Fed do if long-term interest rates continue to rise? The likely answer is financial repression.

A simple way to define real yields is to take the 10-year or 30-year Treasury yield and subtract the latest inflation rate.

If real yields are below zero, holding Treasuries becomes more of a liability than an asset. Holders of Treasuries will sell this increasingly unattractive asset.

The Fed might resort to yield curve control, which means capping yields by committing to buy unlimited amounts of Treasuries to attain the chosen yield (bond-buying drives down yields).

In the past, this was done to win wars. In the future, it will be done to prevent an unwind of the debt bubble. The goal is to impose the costs of society’s excess borrowing onto creditors and savers.

But there’s a catch: Using yield curve control as a tool of financial repression might not work if central banks are left as the only buyers of bonds at low yields. Their balance sheets would explode, and they’d risk losing control of them.

In that case, governments might use regulations to force institutional investors and banks to own government bonds in a negative real yield environment.

And if regulations force institutions to hold negative-real-yield bonds, then the only proven hedge against the portfolio damage is gold.

Some say Bitcoin is now a hedge. But Bitcoin is still fairly untested in financial history and has proven to trade as a “risk-on” asset.

To see how gold performs in a negative real yield environment, take a look at the chart below. Take note that both lines move in the same direction and that the left-hand scale is inverted (with negative numbers at the top of the scale).

The red line is the yield on the 30-year U.S. Treasury bond, minus inflation (year-over-year CPI). It goes with the left-hand scale.

The blue line is the year-over-year percentage change in the price of gold. Note the spike in the late 1970s gold bull run and the slower, steadier 15-20% annual gains in the 2002-2011 bull run. 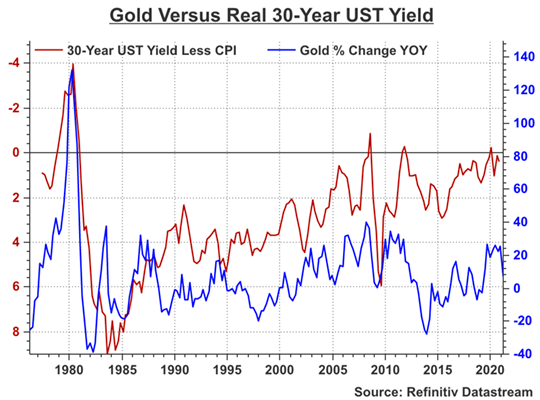 If real 30-year yields are high, the red line is low (as it was in the early-mid 1980s, when yields were high and inflation was falling rapidly).

So, if real yields are low or falling, then gold tends to rise steadily on a year-over-year basis.

The System Has Gold’s Back

If they did, then stock and bond bubbles would deflate in a matter of months, causing catastrophic damage to the economy from an “inverse” wealth effect.

So, gold investors can be confident that the “system” has their back. The real “Fed put” in my mind is for gold, not necessarily for stocks.

Take another look at the moments in the past 45 years when real yields fell below zero. There’s something unique about the first time this happened in the late 1970s. It was the longest period of negative real yields in this data set.

Once real yields went negative in the late 1970s, gold prices accelerated to the upside. It represented a creditor panic, as they lost confidence that inflation would ever be tamed in the future.

Today is basically the opposite situation. Few believe that inflation can be sustained for long periods of time, yet we have both a government and central bank with the desire and tools to make this happen (over time).

My point in showing you this chart is to illustrate that in the months ahead, the red line is going to look a lot like it did in the late 1970s.

Funds that trade gold futures will pick up on the likelihood that real 30-year Treasury yields will fall below zero soon, possibly within the next month or two.

That’s because the year-over-year CPI numbers will spike due to the base effects of low inflation in the initial COVID lockdown months of 2020 (when oil prices briefly went negative).

If we see several months of 3% to 4% CPI, and the 30-Year Treasury yield stays near 2%, then real yields will be in lower territory than they have been since the late 1970s.

When the red line in the chart rises, the blue line tends to do the same, which means higher year-over-year gains for gold.

This isn’t an explicit forecast; it’s meant to illustrate what sort of explosive rally in gold is possible in this macro environment of wild deficits and money printing.

If gold tacks on $500 in the next four or five months, then gold stocks could rise more than 100%.

It’s hard to overemphasize the importance of the 30-year Treasury bond’s transition from a portfolio hedge for institutions and foreign creditors into a portfolio drag.

Many (not all) of these investors will take a look at gold and decide it’s a superior risk-reward proposition when compared to long-term Treasuries.

And this process could happen quickly, considering how much gold futures trading is done at light speed these days.

The bottom line is, gold could see a big spike this year. You don’t want to be late to this party.