The threat from too big to fail banks has now elevated to the point that ignoring a modern Glass-Steagall Act is too dangerous to repress any longer.  As massive Wall Street banks continue to inflate in size, the bipartisan negligence guided by the U.S central bank, has allowed the global economy, markets and businesses to be put at risk.

While speaking in a rare but insightful Q&A session on the state of the economy after the hike, Yellen was asked by a reporter about too big to fail policy and what it meant for the economy and the Federal Reserve going forward?

Reporter: “The administration recently reiterated its support for reinstatement of Glass-Steagall. Treasury Secretary Mnuchin has called for a 21st Century Glass-Steagall. Keeping in mind that there’s no specifics on this proposal, is the fundamental idea of separating commercial banking from investment banking a fruitful line of inquiry. Is this the right path to be pursuing?”

And then the Fed Chair responded:

Yellen: “So, I’ve not seen any concrete proposals along this line. I don’t really know what a 21st Century Glass-Steagall would look like. I think my reading on the financial crisis is that wasn’t the major source of the financial crisis, in fact many of the problems emanated from firms that were investment banking units. To me, an important reform in the aftermath of the crisis was to make sure that investment banking activities that were a core part of the shadow banking system where leverage had built, that those were appropriately capitalized, had appropriate liquidity and their management was strengthened and that’s what we have tried to do. But obviously we would look at any proposals that are put forward. I’m not aware of anything concrete to react to.”

While that may have not been a surprising response, what’s more important is what the head of the U.S central bank did not say.

Chair Yellen neglected to say that through her guidance, or by reference to any of her esteemed colleagues, that the Fed had investigated what could prohibit the Wall Street fiasco experienced in 2008.

She offered no highlights of actual research, data and analysis to back up her “reading” beyond a brief opinion with nothing “concrete to react to.”

There was absolutely no citation of the countless books from strong financial analysts (Nomi Prins, Danielle DiMartino Booth, Anat Admati to name a few).

Janet Yellen completely neglected to highlight that the problems stemming from too big to fail risks have now eclipsed in size and that there are indeed proposals that exist today.

Modern Glass-Steagall Act proposals that would reduce the massive concentration of risky assets in the banks that the Federal Reserve bailed out.

In other words, being negligent under guidance of the Fed is a bipartisan cause. One that has promoted deliberate risk with the ultimate promise of policymaker support.

The Risk of Too Big to Fail Is Bigger Than Before

Since the global financial crisis, regulators have done little to nothing to respond to the growing threat of massive derivatives on Wall Street. Following the Clinton administration and the repeal of the Glass-Steagall Act, those same regulators have allowed banks into carry on with risky securities trading.

This carelessness has put us all at risk.

It has also made growth activity in the economy largely dependent on such risky practices.

The confluence of government support (which protects depositors and creditors), limited liability (which protects shareholders), profit maximisation and incentive pay for financiers encourages a culture of “rational carelessness”. Rather than dismantle the financial doomsday machine, governments and regulators have perpetuated a large financial system, which increases the risks for the economy in the future.

The Federal Reserve Bank of Minneapolis has estimated that the current regulations that have been put into place following the 2008 crisis reduced the chances of a bailout required by the federal government from 84% down to 67% now.

That shows that not even a quarter of all reductions deemed necessary have been made in risk aversion.

At the time of 2008 the Federal Reserve acted in secret to give loans and bailouts to American and foreign banks (along with other businesses) to the whopping sum of $16 trillion dollars according to a U.S Congressional Report. 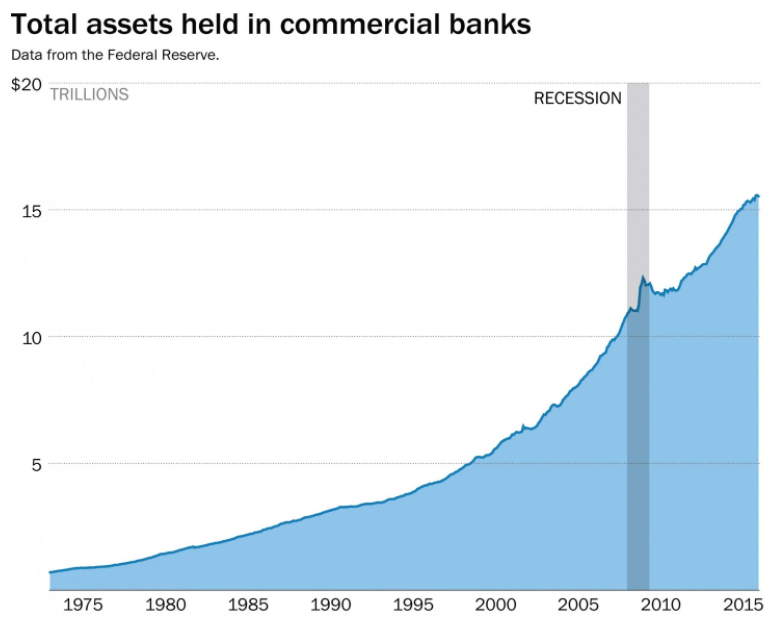 Since the recession that hit commercial banks, the total assets that those respective banks has grown exponentially larger.

These banks since the recession have continued to grow after bailouts that kept them afloat. 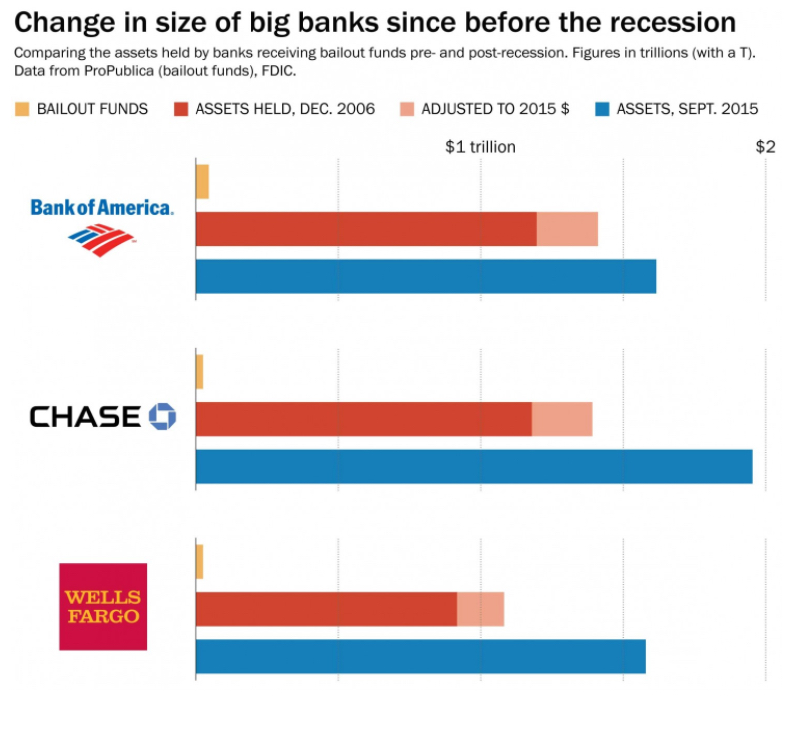 After being bailed out, the 11 out of the 15 largest recipients of taxpayer funds are now bigger than they were before – even taking into account current levels of inflation.

Since Yellen’s “reading” apparently showed her the same evidence that Andrew Ross Sorkin in 2012 identified as a “Glass-Steagall myth,” regulators have allowed these domestic banks to morph into even greater threats.

As was reported last year by one of the primary government regulators for national banks, the amount of derivative exposure the banking system faces now is unlike anything witnessed during the financial crisis (Full derivatives report HERE).

As of March, 2017 $623 billion has simply gone out the door from Federally subsidized bailout funds (accounting for both the TARP and the Fannie and Freddie).

Rickards’ blasts this gross negligence saying that, “by repeating the same mistakes on a bigger scale, banks give us reason to expect an even larger catastrophe than in 2008.”

“In fact, the next panic will be so enormous that it will be beyond the ability of regulators to contain. Investors should prepare now with larger allocations to cash, gold, land and other hard assets.”