Too Big To Fail - It's Happening Again

Too big to fail is returning with a vengeance. The same risk that major Wall Street banks posed in the 2008 crisis when they were too complex, too big and too risky to the global economy to be allowed to fail is alive and well.

According to a recent Bloomberg report the hedge fund industry has officially gone over $3.02 trillion in global assets under its management.

To put that into perspective, that figure is nearly six times the amount that it took for Lehman Brothers to crash and throw the world into financial calamity in 2008.

Not only have big banks morphed into a too big to fail ponzi, but now hedge fund managers are pushing global asset numbers into the same stratosphere. The risk to the global economy is alarming. The threat is real.

Jim Rickards sends the alert saying, “Right now investors are skittish, numerous shocks are waiting to happen and the system is highly unstable due to overleverage and nontransparency.”

Jim Rickards is a Daily Reckoning contributor who was on general council for Long Term Capital Management (LTCM) as a negotiator for its bailout in 1998. He knows the bailout system on Wall Street better than most.

In his analysis of the markets pricing the new White House administration Rickards remarks that, “despite Trump’s best efforts and positive policies, a collapse could happen any day unless radical steps are taken to prevent it — such as breaking up big banks and banning derivatives.”

The threat of “too big to fail” is even more grave when looking at derivatives in the global market. Put simply, a derivative is a security with an attributed value that is then “derived” from one or more assets. Think of it as a bet on a bet.

The biggest global banks are using derivatives to hedge speculation on companies, currency options and nearly anything that can be traded.

Derivatives and Too Big to Fail

As seen in the chart below from a little known report released in March 2016 by the Office of the Comptroller of the Currency (OCC), one of the primary government regulators of national banks, a shocking review of the derivative standings in the United States was given. 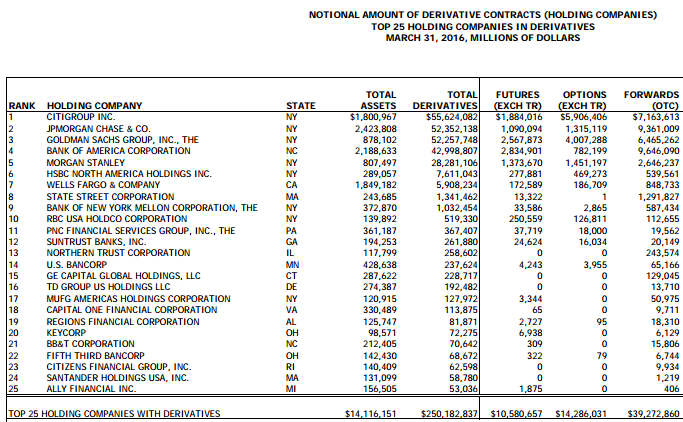 The report found that the top bank holding derivatives Citigroup, the same bank in 2008 that saw its toxic derivatives and subprime debts explode, has over $55.6 trillion in holdings. Along with its fellow big six banks, the figures found are astronomical – and growing larger.

That figure might be opaque, but when breaking it down it is outright abhorrent and dangerous.

According to the OCC of the $55.6 trillion in overall notional (the face value) of its derivatives that are exposed, more than $52.9 trillion of them are sitting in banking institutions that are FDIC insured.

That means that not only are Citigroup and banks of its size and complexity holding a massive amount of money being speculatively bet, but that the risks are being backed by the U.S government.

As former Wall Street managing director, Nomi Prins tells us, “We don’t like it, but certain big banks won’t be allowed to fail.”

She goes on to tell her story that, “When I was working on Wall Street, I saw the inner behavior of how bankers react in a crisis. Here’s the most important lesson that I can pass on to you from my time there: Bankers don’t care about how their actions impact you.”

While Donald Trump might have lit a fire of hope for many on the right, the world of big finance extends beyond partisan politics.  Now that deregulation is anticipated, the financial world is watching and expects to reap the benefits.

Discussion over Treasury Secretary prospective, Steven Mnuchin introducing a “21st Century Glass-Steagall” type bill has been tossed around.  Any progress on that was immediately squashed after his statement that “Separating out banks and investment banks right now under Glass-Steagall would have very big implications.”

Why would a former Goldman Sachs partner and major financier that is suddenly turned into a government leader want to redirect the ship? It’s bad for business.

After all it was a former Goldman Sachs banker turned Treasury Secretary in 1999 that was so constructive in inhibiting President Clinton to demolish the remainder of Glass-Steagall regulation.

As too big to fail enters a new year, it also enters a new government.  The expectations of any policy reversal are short lived and any sweeping policy to reduce the dangerous banking practices are virtually non-existent.

In the face of the next crisis, rest assured that the threat of too big to fail will only raise the stakes. And heighten the fall. Leaving the government, and by virtue, the taxpayer to pick up the bill.

The Federal Reserve has pursued its 2% inflation grail with a monomaniacal determination, like madmen chasing phantoms or mad dogs chasing tails…

Biden’s Crime Against the Economy

Killing the Keystone pipeline was never about the environment, but about politics… Follow the money…

Did the Fed Buckle Today?

The federal funds rate remains glued at zero… as Mr. Powell and his fellows announced this afternoon.

The “Great Reset” Is Here

For years, currency analysts (myself included) have looked for signs of an international monetary “reset” that would diminish the dollar’s role as the leading reserve currency and replace it with a substitute, which would be agreed upon at some Bretton Woods-style monetary conference.

Interest Rates Are Heading Down

Jim Rickards shows you why inflation will stall, interest rates will fall and gold will rise…

The market has thrown in with the Federal Reserve — it expects inflation to prove “transitory.”