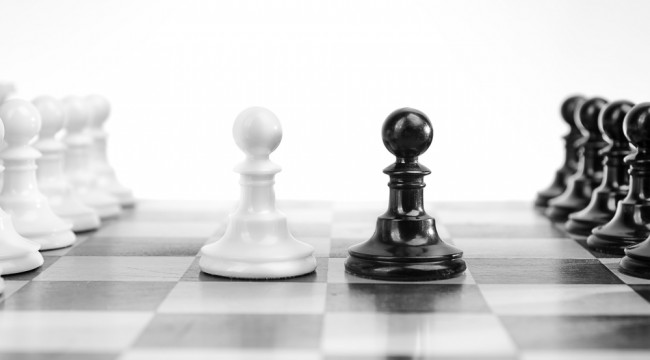 Wise Investments in the Next Global Arms Race

“It hasn’t been revealed what the modern version of the program will consist of,” Time magazine informs us, “but back in the USSR, it required comrade citizens to enter competitions in sports like running, jumping, skiing, swimming and, well, grenade throwing. Tests were set and those who passed were given gold and silver badges that were worn with pride on proletarian chests.”

We’re not sure which is worse… Russians anticipating the return of a “Stalin-era fitness program”… or Americans enduring Michelle Obama’s Let’s Move! campaign.

But then, Putin is a variety of leader with whom Americans are generally unfamiliar. To overcome this knowledge gap, a few folks around the office here put together the following video.

No, that’s not true: They put together this tongue-in-cheek video to generate some Web traffic. We guarantee you’ll be no better informed after watching it than before. But we trust you’ll be entertained.

[Ed. note: If you notice a resemblance to the viral “Honey Badger” video of a few years back, that was on purpose. Well, we did our best to make the language comport with the Presbyterian standard — Agora Inc. founder Bill Bonner’s guideline that we should be comfortable showing anything we write to our mothers.]

“The situation in Ukraine is a looming disaster for Western interests,” says our military affairs expert Byron King, in all seriousness.

The irony is that in Ukraine, “Western interests are abstract, and the ability to enforce a ‘Western’ position is absent.”

On that score, we’ll interrupt Byron long enough to share the results of a public opinion poll. In late March The Washington Post commissioned a survey of 2,066 Americans, asking them what they think the U.S. government should “do” about Ukraine.

But in an online twist, the pollsters also asked them to locate Ukraine by clicking on a high-resolution world map. Each of the 2,066 responses are plotted here, the most accurate in red and the least in blue. 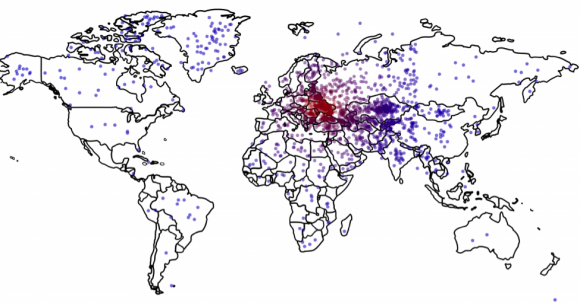 “The farther their guesses were from Ukraine’s actual location,” write the pollsters, “the more they wanted the U.S. to intervene with military force.”

The pollsters did not disclose whether they included any members of Congress in their survey. Heh…

“Ukraine is a pathetic basket case,” says Byron — getting us back on track one more time.

“If nothing else, Ukraine ought to be rich in agricultural potential; it ought to be a wealthy breadbasket, certainly in a world where food is getting more valuable every year. But the fact is that Ukraine is broke and has been horribly misgoverned over the past two decades since it fell out of the breakup of the former Soviet Union.”

Crimea? “Russia’s incorporation of Crimea and Sevastopol is over. It’s a fait accompli. We’ve just watched history get made, and stand by… there may be more of that history stuff yet to come.”

The West has little stake in Crimea, but “control of Crimea is certainly a Russian national interest,” Byron goes on. “Yet pretty much the entire leadership caste of the West was caught flat-footed by Russia’s rapid takedown of Crimea.”

The Wall Street Journal says U.S. intelligence services got none of the typical warnings that precede this sort of news. Then again, “How much intelligence gathering does it take to confirm that people running Russia — certainly Mr. Putin — believe strongly in pursuing Russia’s long-term security interests?”

“We live in a time of new crisis when the dollar may strengthen due to its safe-haven status but inflation is hiding in plain sight — as close as the next federal budget or Federal Reserve meeting.

“In general, I like hard assets like precious metals, key industrial metals and energy supplies. Then there’s also leading-edge technology, for which the world will always provide a market.

“With what we’re seeing,” he adds, “I anticipate a new arms race.” Byron once thought Asia would be the focus of that arms race, given China’s run-ins with its neighbors. “Now I suspect that the arms race will go global. The shock waves of Ukraine and Crimea will ripple out to touch markets and investors everywhere.”

Near term, if U.S. intelligence really was caught flat-footed by Crimea, that means more spending for satellites and surveillance — good news for the “Big Five” defense contractors.

Ed. Note: Longer term, it means big money flows to some very small players. And in today’s issue of The 5 Min. Forecast, Dave gave readers a chance to learn more about a handful of them. And that’s just one of the many real profit opportunities he relays in every single issue. Check it out for yourself, right here.