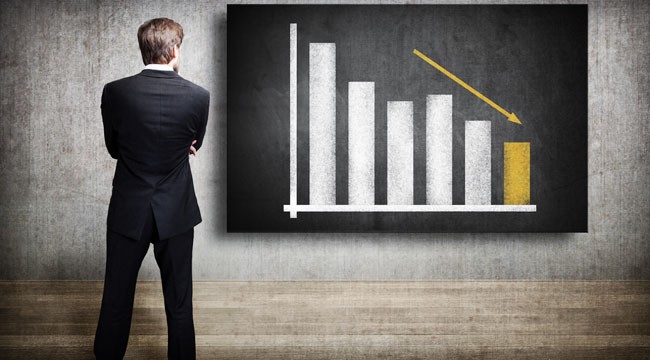 It’s not that the headline is wrong… but it does overlook some problems with the markets and the economy that have nothing to do with war and peace.

Recall on Friday while the markets were closed the feds revealed two big blows to the “accelerating economy” narrative. Retail sales disappointed… and inflation suddenly slowed.

Turns out that slowing was even more dramatic than we first said: “Core” inflation, excluding food and energy, registered its first monthly decline since January 2010.

New York State manufacturing: The Fed’s Empire State survey rings in at 5.2 — above the zero line, but way below the last two months. Remarkably, the mainstream is trying to spin today’s number as good because the previous two months were “unsustainably strong”

Homebuilder sentiment: At 68, the housing market index from the National Association of Home Builders is still way above the breakeven line of 50… but it’s less than the “expert consensus” was counting on.

Reminder: Both of today’s numbers are “soft data” — sentiment surveys and such. Of late, the soft data’s been much more bullish than the “hard data,” of which we’ll get more tomorrow, including industrial production and housing starts.

Meanwhile, projections of first-quarter GDP keep getting revised downward. The latest estimate from the Atlanta Fed — which has a respectable track record in this regard — is a sickly 0.5% annualized rate.

“All of these developments are consistent with a recession in the near future,” says Jim Rickards. No guarantees, he cautions — but that’s direction right now.

“The current economic expansion is 92 months old,” he reminds us.

“There’s a multitrillion-dollar output gap being created, which will never be recovered.

“Meanwhile, government debt continues to grow at 3% per year, soon to be 4% and higher, according to Congressional Budget Office calculations,” Jim goes on.

“What happens when your wealth grows at 2% but your debt grows at 4%? Answer: You go broke.

“The bottom line is America is going broke slowly, growing poor slowly, and may be headed into a recession quickly.

“Bonds and gold have already figured this out. Bonds are soaring on lower rates in anticipation of a recession. Gold is soaring on a safe-haven bid due to geopolitical uncertainty, and in expectation that inflation is the only way out of the debt problem. Stocks are getting a wake-up call now that Trump’s ‘stimulus’ plans are being deferred or going up in smoke.

“All it will take to accelerate all of these trends and put the economy into a recession is one more Fed rate hike in June. As of now, that’s exactly what I expect.”

Underlying Rot in the Post-Election Market Rally — Recession for 2017?

Despite today’s rally, there’s underlying rot in the stock market — which, we hasten to point out, peaked more than six weeks ago.

For one thing, small caps have been going nowhere for four months. “We like to see small-cap stocks lead the market,” says Greg Guenthner in today’s Rude Awakening. “Investors buy smaller stocks when they are willing to take more risk. That’s not the case right now.” 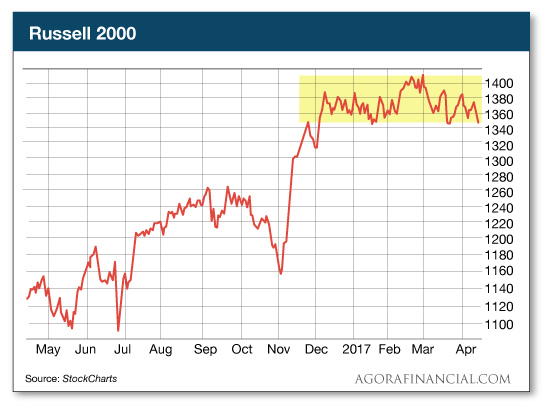 “The idea is that the two groups combined can measure the overall health of the economy. If the industrials are performing well along with the transports, we can assume goods are being made and delivered. In other words, the economy is humming along.

“The transports slipping lower could turn out to be an early-warning sign that the industrials are in for a bigger drawdown as we approach the summer.”

Meanwhile, volatility as measured by the VIX is its highest since the election. The VIX, as you might know, is often considered the market’s “fear gauge.”

“Over the past few months,” says our income specialist Zach Scheidt, “the VIX has been trading at a very low level. Investors have been happy with the ‘Trump Bump’ as the market moved higher. And volatility has been very low.” 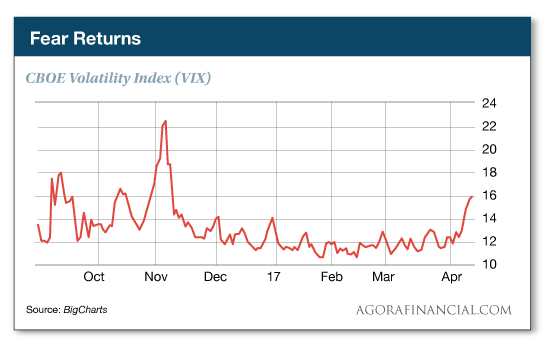 But not so in recent days.

“The threat of a new cold war with Russia, gridlock in Washington and a new round of earnings reports all have investors on edge,” Zach tells us.

“And that’s why we’re seeing the VIX start to trade higher.”