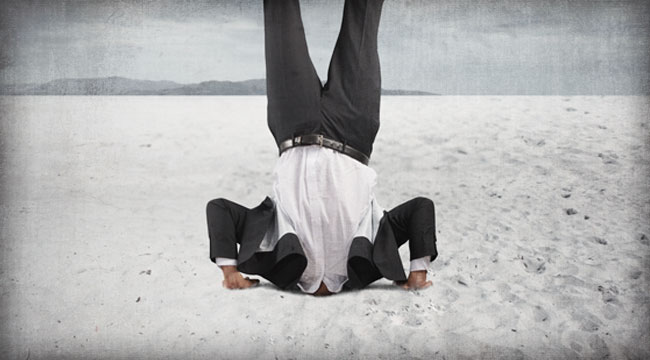 Winners and Losers in the Battle of Economic Stupidity

Turn on the tube and economic ignorance seems to be everywhere. There is constant shilling for more government. Business is demonized. Man is said to be trashing the environment. “Workers and women are oppressed” is the constant mantra.

And members of the clueless media nod their heads in unison.

Only John Stossel has provided the fresh air of economic wisdom from his days on ABC’s 20/20 to his currently running Stossel on Fox Business. He admits in his book Myths, Lies, and Downright Stupidity that he too used to believe the Big Government propaganda, but he learned the error of his ways.

“There’s still a feeling in this country, A, that men own the jobs, and B, that men are automatically better at jobs.”

Now he takes on government apologists from all directions. They’re everywhere, they have their story, and they’re sticking to it. That’s the funnest part of Stossel’s book. He confronts his (your) enemies with ironclad logic, and they shock him every time with their downright stupidity.

The author disposes of the myth that most business people believe in free markets. Businesses can’t use force to hinder competitors, so they turn to their friends in government to use force on their behalf.

Tesla’s current fight with the car dealers comes to mind when Stossel relates a story about interviewing David Hyatt, spokesman for the National Automobile Dealers Association. The electric car company is trying to bypass dealerships and sell directly to consumers, but many state governments are cracking down on this and banning their operations.

Hyatt said with a straight face that when manufacturers sell directly to customers via the Internet, “it leaves the dealer in an unfair competitive situation.”

“Unfair to whom?” asked Stossel.

“Their own dealer,” said Hyatt, who went on to say dealers would be put out of business by such a practice.

“So what?” Stossel said. Customers like it, and plenty of middlemen have been put out of business by the Internet.

Hyatt paused, thinking of a good retort. All he could come up with was, “The key is that there is a very healthy system in place.”

While the book was published a few years ago, the issues haven’t gone away. It could have been published last week.

The war on women still rages on. You know the stat they tell you whenever they get the chance, that women make only 77 cents or 85 cents for the same job a man makes a dollar for. Actually, when the war on women started, women made 59 cents to a man’s dollar.

Stossel sought out Warren Farrell, who was elected three times to the board of the National Organization for Women (NOW), to weigh in.

Farrell used to wear a 59 cent button until he considered the idea of starting an all-female firm that would obviously destroy all competitors because labor costs would be a fraction of firms employing males.

It occurred to him the numbers couldn’t be right, so he did 15 years of research and found women make less because men do jobs women don’t want to for a variety of reasons. Women want flexibility; men want money.

Our liberty correspondent tried facts and logic on Martha Burk, who had led a protest against Augusta National Golf Club for not having female members.

So entrepreneurs increase their labor costs by 25% simply because they like men? As Stossel says throughout the book, “Get the shovel.”

Minimum wage is a stupid idea that rears its ugly head every few years like clockwork. This year, fast-food workers are striking for $15 an hour, and President Obama believes everyone should make at least $10.10. But the author points out, “Wages aren’t just money.” Higher wages attract better workers. Lower wages in an area might attract capital. Wages, like all prices, direct capital to its most efficient uses.

Taking a page out of Bastiat and Hazlitt, Stossel recognizes the unseen victims of minimum wage. There are businesses that never expand or never open in the first place because minimum wage pushes the price of labor to uneconomic levels.

A complete chapter is devoted to lawsuits. Instead of protecting the little guys, Stossel writes, “it’s the lawyers who are the bullies.” The cost of lawsuits is one thing, but again, remembering the unseen, the “fear of lawsuits now deprives us of things that make our lives better.”

The chapter “Experts for Everything” illustrates that whether it’s someone who says they can “cure” homosexuality or pick stocks or a chiropractor who says he can remedy asthma, run for the hills. And while it seems off topic, if you have your eye on one of your cousins, Stossel says go for it.

The hysterical religion of environmentalism is questioned in a chapter on belief. Yeah, the planet is warming in relation to the “Little Ice Age” that ended in the 1800s. If humans are causing the warming, then why did half the warming occur between 1900-1945? Stossel provides a temperature chart for the last 4,000 years reflecting temperatures being virtually flat in this millennium.

As for the wild assertions that melting glaciers will cause the sea level to rise, leaving parts of Manhattan and Miami underwater, that’s nonsense. Just like melting ice doesn’t cause your drink to overflow, melting polar caps (ice), will not make the oceans rise, submerging valuable real estate around the world.

Myths, Lies, and Downright Stupidity covers a much wider swath of topics than expected. It’s not just bureaucratic foolishness and economic ignorance that are explored. Myths about health, happiness, parenting, whether size matters, and plenty more are dispelled.

This book confirms Stossel’s greatness as a fighter for everyday freedoms. If you’re unfamiliar with him, this is a great introduction to his work, to the cause of liberty, and to sound economic thinking.

Ed. Note: Readers of today’s issue of Laissez Faire Today got an opportunity to grab a copy of Myths, Lies and Downright Stupidity at a steep discount, as well as 3 other chances to discover how they could protect and grow their wealth in any kind of market. Don’t miss any more opportunities like this. Sign up for Laissez Faire Today, for FREE, right here.

Elon Musk: We Don’t Want to Turn Into House Cats

David Bross reveals the CEO of Tesla Motors and SpaceX; Elon Musks’ thoughts, during an interview at this week’s The Code Conference…