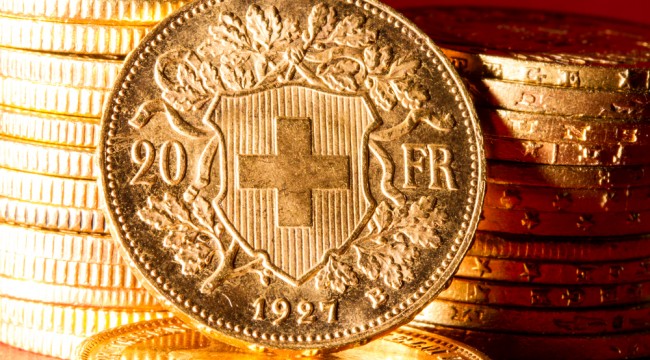 All Eyes on the Swiss Gold Referendum

On November 30th, voters in Switzerland will head to the polls to vote in a referendum on gold. On the ballot is a measure to prohibit the Swiss National Bank (SNB) from further gold sales, to repatriate Swiss-owned gold to Switzerland, and to mandate that gold make up at least 20 percent of the SNB’s assets.

Arising from popular sentiment similar to movements in the United States, Germany, and the Netherlands, this referendum is an attempt to bring more oversight and accountability to the SNB, Switzerland’s central bank.

….no tyrannical regime in history has bullied Switzerland as much as the United States government has in recent years.

The Swiss referendum is driven by an undercurrent of dissatisfaction with the conduct not only of Swiss monetary policy, but also of Swiss banking policy. Switzerland may be a small nation, but it is a nation proud of its independence and its history of standing up to tyranny. The famous legend of William Tell embodies the essence of the Swiss national character. But no tyrannical regime in history has bullied Switzerland as much as the United States government has in recent years.

The Swiss tradition of bank secrecy is legendary. The reality, however, is that Swiss bank secrecy is dead. Countries such as the United States have been unwilling to keep government spending in check, but they are running out of ways to fund that spending. Further taxation of their populations is politically difficult, massive issuance of government debt has saturated bond markets, and so the easy target is smaller countries such as Switzerland which have gained the reputation of being “tax havens.”

Remember that tax haven is just a term for a country that allows people to keep more of their own money than the US or EU does, and doesn’t attempt to plunder either its citizens or its foreign account-holders. But the past several years have seen a concerted attempt by the US and EU to crack down on these smaller countries, using their enormous financial clout to compel them to hand over account details so that they can extract more tax revenue.

The US has used its court system to extort money from Switzerland, fining the US subsidiaries of Swiss banks for allegedly sheltering US taxpayers and allowing them to keep their accounts and earnings hidden from US tax authorities. EU countries such as Germany have even gone so far as to purchase account information stolen from Swiss banks by unscrupulous bank employees. And with the recent implementation of the Foreign Account Tax Compliance Act (FATCA), Swiss banks will now be forced to divulge to the IRS all the information they have about customers liable to pay US taxes.

On the monetary policy front, the SNB sold about 60 percent of Switzerland’s gold reserves during the 2000s. The SNB has also in recent years established a currency peg, with 1.2 Swiss francs equal to one euro. The peg’s effects have already manifested themselves in the form of a growing real estate bubble, as housing prices have risen dangerously.

Given the action by the European Central Bank (ECB) to engage in further quantitative easing, the SNB’s continuance of this dangerous and foolhardy policy means that it will continue tying its monetary policy to that of the EU and be forced to import more inflation into Switzerland.

Switzerland… is ruled by a group of elites who are more concerned with their own status… than with the good of the country.

Just like the US and the EU, Switzerland at the federal level is ruled by a group of elites who are more concerned with their own status, well-being, and international reputation than with the good of the country. The gold referendum, if it is successful, will be a slap in the face to those elites.

The Swiss people appreciate the work their forefathers put into building up large gold reserves, a respected currency, and a strong, independent banking system. They do not want to see centuries of struggle squandered by a central bank. The results of the November referendum may be a bellwether, indicating just how strong popular movements can be in establishing central bank accountability and returning gold to a monetary role.

Ed. Note: Sick and tired of central banks decimating your purchasing power? Don’t worry… There are alternatives… Including one “underground banking system” that’s working wonders for a handful of savvy investors right now. Readers of The Daily Reckoning email edition got a chance to get in on this banking system for themselves. If you’re not signed up yet, you missed out. Don’t let another great opportunity like this pass you by. Sign up for The Daily Reckoning email edition, for FREE, right now and start reaping all of the financial benefits of being a subscriber.

This article originally appeared at The Ron Paul Institute.