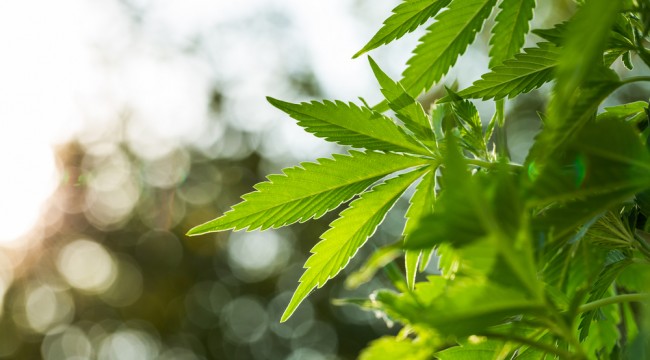 You may’ve already seen the video. 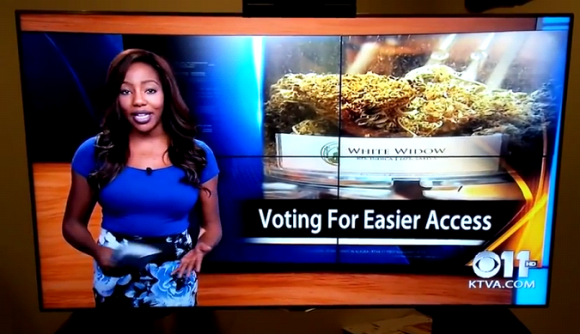 Charlo Greene, a local reporter in Anchorage, Alaska, revealed on live TV that she’s owner of the Alaska Cannabis Club, a middleman between medical marijuana cardholders with weed and those without.

“I, the actual owner of the Alaska Cannabis Club,” Charlo said on the air, “will be dedicating all of my energy toward fighting for freedom and fairness, which begins with legalizing marijuana here in Alaska. 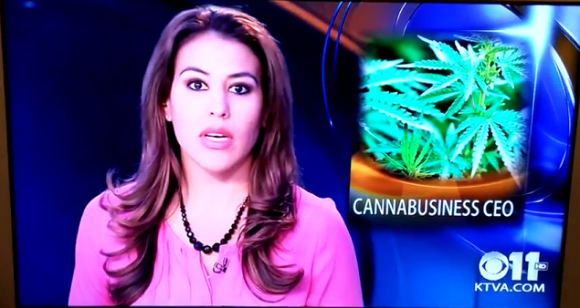 “Why are Americans arrested every 37 seconds and Alaskans every 4.3 hours?” Charlo asks in her crowdfunding campaign video.

“Why should an aspiring someone lose their ability to earn a higher education to become that someone they were meant to be?”

And that, Charlo says, is only the beginning…

“Once we get that done, nationally,” she said, “we the people will realize that we are stronger than ever. And you will feel empowered to take up what you choose to fight.

“Advocating for freedom and fairness should be everyone’s duty. I’m making it my life work to uphold what America stands for truly: life, liberty, and the pursuit of happiness, ideals that now need to be defended.

“But I can’t do this alone… Where do you stand?”

As Howard Zinn pointed out, “You can’t be neutral on a moving train”…

If it’s not already a given…

So much so, that I’ve donated to her Indiegogo campaign out of my own pocket.

And I’m not being very controversial by telling you this. Not anymore.

According to a Gallup Poll last year, 58% of Americans believe pot should be available the same way tobacco and alcohol is today.

Two decades ago, that number was 24%.

And the financial support exists, too… 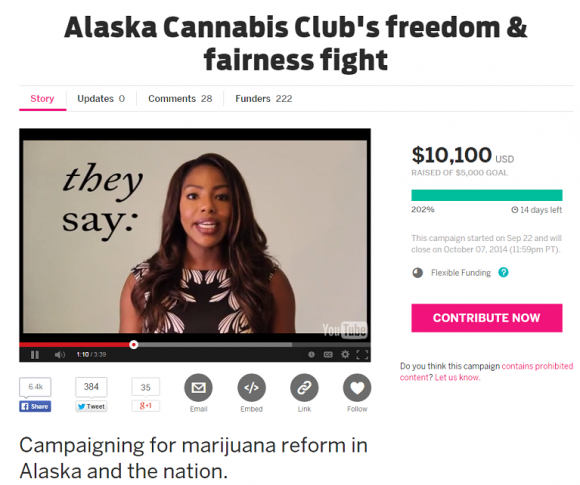 Why do I think should weed be legal? Let’s start at the top…

Every year, 658,000 arrests are made for simple marijuana possession.

“That’s equivalent,” journalist Nick Gillespie writes in Time, “to the population of Boston being handcuffed every year for carrying the wrong plant.”

First off, no one should be arrested for smoking weed. If marijuana being illegal really is an issue of the dangers of drug abuse, as is often touted, then we should treat marijuana abuse as a health issue (mental and physical)…

Not a criminal issue.

But, of course, it has nothing to do with keeping you safe.

Let’s rewind back to when it became illegal…

Harry Anslinger, the director of the newly-created Federal Bureau of Narcotics (later morphing into the DEA) was a driving force for The Marijuana Tax Act of 1937, which gave the federal government the ability to “control” marijuana.

Wanting so bad for the FBN to become a “white knight” organization of the world, Anslinger started a campaign against his imagined evils of marijuana.

With no evidence whatsoever, he donned it as a cause of mass social disorder.

He disseminated pictures of gruesome murders, reporting that they were committed by marijuana smokers, traumatizing the population.

“You smoke a joint,” he told the already-terrified populous, “and you’re likely to kill your brother.”

Each year, this ridiculous rampage against marijuana costs us about $4 billion.

And for what? To arrest legitimate business owners like Aaron Sandusky?

Sandusky ran a medical marijuana dispensary in California. It was in 100% compliance with state laws. But, nevertheless, he was raided and treated like a terrorist, and is now serving a 10-year sentence.

One paper, approved and signed by 300 economists (including three Nobel laureates), suggested that legalization of marijuana could save the U.S. $13.7 billion per year if they taxed it at rates similar to alcohol and tobacco.

Yet, the official White House marijuana page gives us these words of wisdom:

The legalization of marijuana, it says, “hinders recovery efforts and poses a significant health and safety risk to all Americans, especially our youth.”

Yes, so let’s protect the youth by giving them a criminal record and casting them out from functional society. Good plan.

African Americans account for nearly 14% of the U.S. population. And an estimated 13.5% of annual marijuana users.

However, blacks are four times more likely to be arrested for marijuana possession than whites.

And it’s not just limited to the urban sprawl, mind you…

In one study spearheaded by the ACLU, in over 96% of counties examined (which make up 78% of the U.S.), blacks were arrested at extraordinarily higher rates than whites for marijuana possession. 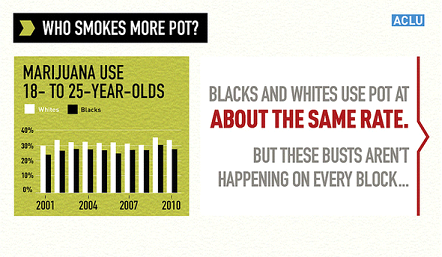 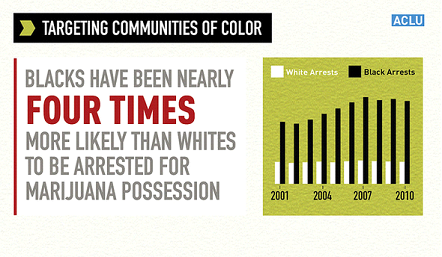 Thus, young black males are pumped into the criminal system at an astonishing rate (and arrested on the basis of a racist law). This, of course, only perpetuates the vicious cycle of poverty and crime afflicting much of the black community.

Luckily, we no longer have to speculate on what’s likely to happen if we were to legalize pot on a mass scale…

Colorado and Washington are living experiments.

The results are far-flung from the weird apocalyptic vision keeping the anti-weed advocates up at night.

Doomsday arguments like: “Our streets! Our streets won’t be safe with stoners out on the roads!”

Per The Washington Post (which, by the way, urged D.C. voters to reject legalization):

“What about crime?!” the critics try again. “Crime rates will blast through the roof! Our families will be in danger!”

Not so either. Via the Inquisitr blog…

Colorado officially legalized marijuana for recreational use on Jan. 1, 2014.

“As reported by the state’s official website,” the blog reads, “crime data for Denver, the hub of legal pot sales in the state, shows that murders, assaults, rapes, burglaries, and other violent crimes have actually declined during the first three months of the year, compared with the same period for 2013.

“Though it is impossible to prove that legalizing marijuana brought down the crime, it does prove the anti-marijuana advocates wrong who were pretty confident that crime would invariably grow.”

And last but not least… per Complex magazine:

What about health? Bite-sized death count:

THC, marijuana’s active ingredient, is less toxic than nicotine. And it does, in fact, have several medicinal properties…

The evidence speaks for itself: Even once-devoted opponents of legalization are starting to flip sides…

“Long before I began this project,” neurosurgeon and CNN’s chief medical correspondent Sanjay Gupta says of his documentary titled Weed, “I had steadily reviewed the scientific literature on medical marijuana from the United States and thought it was fairly unimpressive. Reading those papers five years ago, it was hard to make a case for medicinal marijuana. I even wrote about this in a Time magazine article, back in 2009, titled, ‘Why I would Vote No on Pot.’

“Well,” Gupta wrote, “I am here to apologize.

“I apologize because I didn’t look hard enough, until now. I didn’t look far enough. I didn’t review the papers from smaller labs in other countries doing some remarkable research, and I was too dismissive of the loud chorus of legitimate patients whose symptoms improved on cannabis.

“I mistakenly believed the Drug Enforcement Agency listed marijuana as a schedule 1 substance because of sound scientific proof. Surely, they must have quality reasoning as to why marijuana is in the category of the most dangerous drugs that have ‘no accepted medicinal use and a high potential for abuse.’

“They didn’t have the science to support that claim, and I now know that when it comes to marijuana, neither of those things are true. It doesn’t have a high potential for abuse, and there are very legitimate medical applications.

“In fact,” he says, citing an example of one woman suffering from 300 seizures a week, “sometimes marijuana is the only thing that works…

“We have been terribly and systematically misled for nearly 70 years in the United States, and I apologize for my own role in that.”

No. I’m not saying that kids should go out and smoke it freely.

There is an overwhelming amount of evidence that tells us marijuana is counterproductive to the development of an adolescent brain.

Yes, I believe it should be avoided by teens.

Teenage use of alcohol, tobacco and marijuana is already a problem in the U.S.

Again, though, it’s not a criminal issue. It’s an issue of mental and physical health. And it should be treated as such.

So here’s what it comes down to…

As an adult, I (and I alone) should be able to decide if I’m allowed to smoke a plant for pain… for anxiety… or even for enjoyment.

Not anyone else. Especially not the government.

In exactly a week from today, Maryland’s decriminalization law goes into effect…

If anyone is caught with weed in the Baltimore streets, it’s a $100 fine. And, of course, the dopers lose their stash. But no more jail time.

It’s a victory. And a step in the right direction. But we still have ways to go as a country.

Ed. Note: Like what you see? Each day, Laissez Faire Today readers receive an inside look into the story not being told in the mainstream news. Untethered by corporate interests, LFT is bare-knuckled and no-holds-barred. Don’t miss a single issue. Sign up today, for FREE, right here.