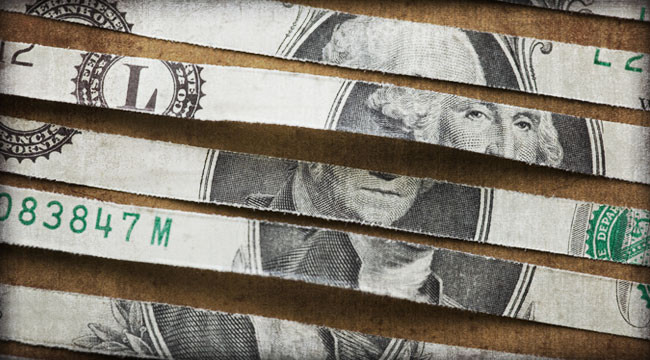 One of the most pressing issues of our time is the push for monetary freedom. The only sound monetary system is one which protects sound money and allows consumers, businesses, and investors the freedom to transact in the currency of their choice. The importance of sound money is summed up nicely by Ludwig von Mises:

“It is impossible to grasp the meaning of the idea of sound money if one does not realize that it was devised as an instrument for the protection of civil liberties against despotic inroads on the part of governments.”

It is no wonder that governments fight tooth and nail against sound money, as sound money protects the well-being of the middle class and the poor while preventing the expansion of government.

Most people understand the risks inherent in stock or bond investment, but the risk of holding savings accounts or cash is still drastically under-appreciated.

Indeed, the 20th century witnessed a revolt by governments against the strictures of sound money. In some countries such as Weimar Germany the revolution came quickly and the results were both immediately apparent and instantaneously disastrous. In other countries such as the United States, the revolt came more gradually, with the destructive effects of money printing only recently becoming apparent to more and more Americans.

Over the past 100 years, the Federal Reserve has continually pumped new money into the economy, resulting in a 96 percent devaluation of the dollar. This devaluation does not affect everyone equally, as the banks who receive this new money first benefit from using it before prices rise, while average Americans suffer the price rises first and receive only a trickle of money well afterward. In this way the Fed enriches Wall Street while impoverishing Main Street, leading to a growing disparity of wealth.

The wealthy are always able to protect the value of their assets against inflation to an extent that the middle class and poor cannot. Anyone with enough money and resources can set up a foreign bank account denominated in euros or Hong Kong dollars, or purchase gold and silver that will be safely stored in London or Singapore. The rich are best able to purchase precious metals, the only ones able to invest in high-yielding hedge funds, and the ones most able to shelter their assets from punitive taxation.

Mexican workers can set up accounts that are denominated in ounces of silver, and can take delivery of that silver whenever they want, tax-free. In Singapore and some other Asian countries, individuals can set up bank accounts denominated in gold and silver. Debit cards can be linked to gold and silver accounts so that customers can use their gold and silver to make point of sale transactions, a service which is only available to non-Americans. In short, Americans have far fewer options to protect their wealth than citizens of many foreign countries do.

The solution to this problem is to legalize monetary freedom and allow the circulation of parallel and competing currencies. There is no reason why Americans should not be able to transact, save, and invest in the currency of their choosing.

Unfortunately, decades of government restrictions and regulations have hampered and prevented the circulation of parallel currencies and destroyed the familiarity of Americans with any sort of money aside from Federal Reserve Notes or bank deposits denominated in U.S. dollars. The thought of introducing parallel currencies undoubtedly scares many people who understandably wish to minimize their financial risk.

All financial activity is fraught with risk. Most people understand the risks inherent in stock or bond investment, but the risk of holding savings accounts or cash is still drastically under-appreciated. Everyone is familiar with the maxim “Don’t put all your eggs in one basket” and investors and savers are constantly urged to diversify their portfolios, yet the U.S. government continues to set roadblocks that force Americans to transact and save in dollars that continue to depreciate.

According to the government’s official figures, price inflation runs around two percent per year which means that, since interest rates on savings accounts are near zero, the real rate of return on savings accounts is negative. Anyone holding a savings account or cash is losing nearly two percent of the value of his savings per year with this relatively mild inflation. Some private economists estimate that actual price inflation is running closer to nine percent per year, which would make the loss from holding dollars enormous.

It is horribly unjust to force the American people to do business with a dollar that is continuously debased by the Federal Reserve.

Even greater danger comes during bouts of hyperinflation, such as during Weimar Germany and more recently in Zimbabwe. But when Zimbabwe’s dollar became worthless, people began to use U.S. dollars, South African rand, and Zambian kwacha to conduct transactions. Similarly in Weimar Germany, many individuals resorted to using dollars, pounds, and precious metals.

It is horribly unjust to force the American people to do business with a dollar that is continuously debased by the Federal Reserve. Forcing a monopoly currency with legal tender status onto the people benefits the issuer (government) while harming consumers, investors, and savers.

The American people should be free to use the currency of their choice, whether gold, silver, or other currencies, with no legal restrictions or punitive taxation standing in the way. Restoring the monetary system envisioned by the Constitution is the only way to ensure the economic security of the American people.

This essay was edited from the Congressional Record

Ed. Note: The decline of paper currencies is no secret to anyone who’s paid attention to history. Eventually they all go the way of the dodo. That’s why it’s so important to find ways around it… something The Daily Reckoning email edition offers its readers every single day… FREE. Sign up for The Daily Reckoning, for free, right here, and start learning the best ways to safeguard and even grow your wealth no matter what happens to untrustworthy paper currencis.