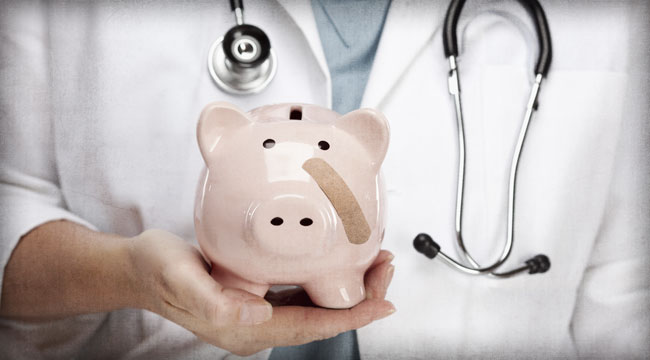 Why Listening to Economists Is Dangerous for Your Health

According to the Bureau of Labor Statistics, consumer prices are rising at a 2.1% annual rate. This suggests to us that the current stock market boom will die with a bang, rather than a whimper.

Fed economists say they don’t think inflation rates are rising. They think the most recent reading is a fluke. But why does anyone take them seriously?

Prakash Loungani, an economist working for the IMF, undertook a study, not so much to find out as to gawk and laugh. It was published in 2001 in the International Journal of Forecasting.

For those of us who have been following the story, there were no surprises in it. “The record of failure to predict recessions is virtually unblemished,” he reported.

That was in 2001. Surely, by 2014, the experts had managed to stain their pathetic record with some success?

Nope. Loungani and a colleague, Hites Ahir, took another look. They examined 77 different national economies, of which 49 were in recession in 2009. In 2008, how many economic forecasters saw the recessions coming a year later?

The answer is zero. Recession or no recession? It’s a binary question. You’d think a few would have gotten the right answer by chance. Instead, none did.

Queen Elizabeth II of Britain was baffled. She wanted to know how come, with so many economists on Her Majesty’s payroll, none had warned her of the worst recession to hit the developed world since her grandfather, George V, was on the throne.

She needn’t have bothered asking.

It didn’t matter whether the economists were working for private companies or for the government. The predictions they made were terrible.

We believe prices should be allowed to do anything they damn well please. After all, they’re trying to tell us something.

Economists didn’t see the recession of 2009 until it had crashed onto their heads — after the markets had been cut in half and Wall Street had come within a hair of going broke.

Then their eyes were shocked open. Everywhere they looked they saw recessions — even where there were none. They predicted recessions in 54 of the 77 economies studied by Loungani — six more than actually had them.

Which brings us back to the Fed. Its Dynamic Stochastic General Equilibrium model makes forecasts; they are always wrong.

For example, back in 2011, the Fed’s model predicted economic growth in the US of about 3.5% for 2014. Each quarter the Fed adjusted the reading downward, as the future approached the present. Now, it is projecting growth for this year of barely 2%.

Quack, quack, quack… Why do people pay them any attention?

But not only do they listen, they salute… and implement trillions of dollars in fixes and fiddles, many of which result in disaster. It is as though George Armstrong Custer rode to the Little Bighorn on the advice of a palm reader.

You might say we are not giving the devil his due. Economists have “avoided another depression,” you might say. And they’ve even managed to bring volatility down to levels that haven’t been seen in 10 years.

This despite adding $10 trillion to central bank balance sheets… goosing up the stock market 150% since 2009… and swamping the planet with corporate, student and sovereign debt.

“Volatility extinguished by moves from central banks,” was a recent headline in the Financial Times.

The VIX — Wall Street’s “fear gauge” — is at only about 14. At the height of the crisis, in 2008, when Ben Bernanke warned Congress that if it failed to act by Friday “we may not even have an economy on Monday,” it was at about 80.

Now investors scarcely bother to read the headlines… and prices barely budge. Surely, preventing prices from going up and down — that’s an achievement, right?

Well, you can say we’re “old school” on this one. We believe prices should be allowed to do anything they damn well please. After all, they’re trying to tell us something.

Prices, according to the classical economists, were not to be set. They were to be discovered. And where they are found tells you something.

High prices bespeak scarcity, and the need for more investment. Low prices shout abundance… or even surfeit… warning you to stay away. Gagging prices serves no purpose at all.

Besides, do you remember the Great Moderation?

In the mid-2000s neither the whine of recession nor the growl of bear markets could be heard. House prices rose. Stocks went up. The economy appeared to be in a sustained expansion, caused largely by the Fed’s manipulation of mortgage credit.

Even as late as 2007 no respectable economist gave out a peep of warning.

And that sound you don’t hear now? That eerie calm in the markets? That is the sound of prices that are not allowed to speak their mind…

But oh… Prices that do not speak whisper softly to an o’er-stressed economy… and bid it to break down or blow up.

Ed. Note: There was one person predicting the 2008 financial crisis. And those who listened to him were able to protect their wealth before the economy tanked. Now that same person is making another big prediction. And he thinks this upcoming economic collapse could be the worst one yet. Readers of the FREE Laissez Faire Today email edition got a chance to discover his big prediction first-hand – along with all the profit potential that comes with it. If you weren’t among those lucky enough to check out this research, not to worry… You can sign up for FREE, right here to ensure you never miss out on another great opportunity like this.

Yesterday our co-founder Addison Wiggin described how two 20th century Italian philosophers are presently battling for the soul of America. Today, Addison shows you the wisdom of an old, dead, German economist who would probably be “cancelled” by today’s economics profession.