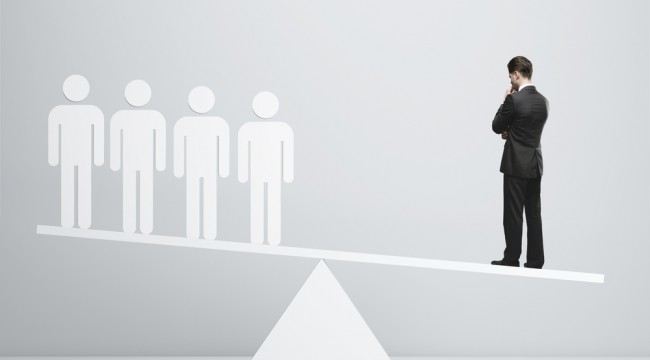 The subject of income inequality makes for great election year discussion, and of course 2014 represents the mid-term election. Recall how the Occupy [fill in the blank] movement catalyzed around the 99% vs. 1% issue. The spate of articles discussing income inequality has risen along with the stock market. The political “solution” to income inequality has its foundation on tax or regulatory policy and perhaps outright legislation. Is this the answer?

Before I address that question, we should probably ask what the catalysts of income inequality are. Readers of this section of cyberspace know how I have consistently mentioned credit cycles as being responsible for exacerbating the boom/bust cycles in the economy. In the chart below (Piketty and Saez with my annotations for the stock market), I illustrate the top 10%’s share of pre-tax income going back to 1917. Near the historic stock market top of 1929, we see the top 10% having nearly 50% of all income. The major stock low of 1932 did see a smaller share of income for this top percentile though it was still high. After making an intermediate stock high in 1937, the market fell into 1942 and with it so did the incomes of the top percentile. We know the credit cycle was at its peak in the 1920s and eventually the Great Depression flushed out all the excesses. 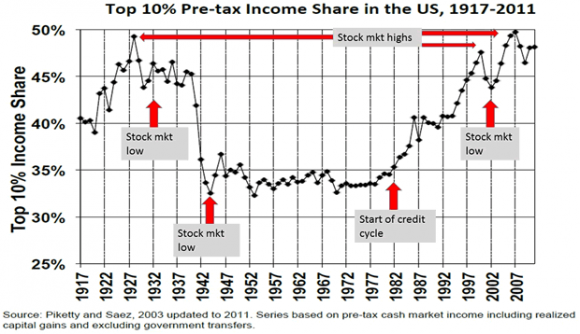 From 1942 to 1982, the top percentile incomes stayed relatively flat between 32% and 35%. While the stock market had a healthy rise during this time, it was not the credit-inspired/generation-inspired boom of post 1982. After 1982, the credit cycle began in earnest and with it the stock market achieved lift-off. Income inequality took off as well. The stock crash of 1987 was but a mere blip on the chart.

The stock highs of 2000 and 2007 propelled the upper incomes to near record levels. The subsequent bear market lows of 2002 and 2009 decreased the upper percentile’s share of income as expected but nowhere to the level of the 1942-1982 period. In 2012, incomes of the upper 10% actually surpassed 50% for the first time in history (and this during a historically slow recovery).

Clearly, the liquefying of the markets by the Fed hastened the chase for yield whether that is in the stock or bond markets. What is clear is that credit inspired booms tend to concentrate income and wealth in the upper tier. Since 1982 the credit inspiration has been directed to the investment cones I mentioned in my book E$caping Oz:Protecting your wealth during the financial crisis. These investment cones funneled excess credit into financial assets. Financial assets are where a great deal of the wealth/income concentration lies. The problem with the unnatural extension of the credit cycle by the Fed is the psychology of the financial market post 2008. Had the Fed allowed financial asset deflation to occur, markets would be more coherently valued and I would not pen an article about income inequality. Presently, the market believes the Fed Wizards will keep the party going. The Fed balance sheet ballooned to $4 trillion and it cannot continue to be the buyer of last resort for financial assets. For conservative minded savers who see nothing but ridiculously low interest rates, the urge to save simply intensifies. For other investors, the yield chase becomes a dangerous game with far more risk. If a bear market in financial assets resumes, the investor reaction will be worse than it would be.

In a recent article in the St. Louis Business Journal, Professor Mark Rank of Washington University suggests that being in the top percentiles of wage earners can be a transient state for some. According to the study,

Professor Rank does not delve into the reasons for transience and we could certainly debate some of the percentages. Most importantly, the fact that some portion of the population can move in and out of the upper percentiles leads me to conclude that some part of this movement could be related to changes in values of financial assets.

For those concerned about income inequality, I would wholly agree that the American economy is experiencing an acute case of it. Rest assured, the ensuing bear market in financial assets is likely to bring down the upper crust of income earners to levels at or below those witnessed from 1942-1982. At that bear market bottom, the public will be worried about other things.

Ed. Note: As is often the case when it comes to economics, things tend to work best when they’re allowed to sort themselves out. Income inequality is just one example. And the next time the market bottoms out, there will be a handful of investors who’ve positioned themselves ahead of the rest… thus avoiding the negative fallout. Mr. Mosquera is correct… the public will indeed be worried about plenty of other things during the next bear market bottom. See to it that your financial stability isn’t one of them. Sign up for the FREE Daily Reckoning email edition, right here, and start learning specific actions you can take right now to safeguard and grow your wealth ahead of the next downturn.