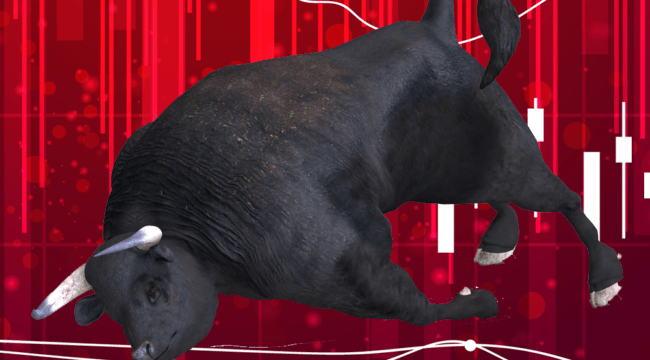 For the longest bull market in history… it is a time to die.

For the Dow Jones, aged 11 years and two days, the soul quit the body yesterday afternoon.

Underlying cause of death: irrational exuberance.

The sickness was brief, acutely brief — a mere 19 days.

Only in November 1931… in the teeth of the Great Depression… did the index plunge from record heights to bear market depths in so short a space. Such was the violence of the death spasm.

Both S&P and Nasdaq joined it in the morgue this afternoon.

And so the flags over Wall Street flap at half mast today… and the black crepe is up.

Yet as we have argued previously:

The stock market is an ingenious device constructed to inflict the greatest suffering upon the most people… within the least amount of time.

The eulogies have already come issuiwwng…

Linda Zhang is chief executive officer of Purview Investments. Says she, a pearl of sorrow coursing down her cheek:

This bull market will go down in history as the one that nobody believed would last this long… What destroyed us in 2008 was overleverage. What brought us to where we are in 2020 is too much hope, sky-high valuations.

Doug Ramsey is chief investment officer of Leuthold Group. This fellow labels the late lamented decade the “steroid era” of the stock market — and identifies the supplier:

It was the most hated bull market — people said that early on. I think in the middle of the decade people [got] on board. Certainly in the last year they became believers. I’d also call the whole decade the steroids era because of all the help out of the Federal Reserve. I think it certainly did get a lot of help from the Federal Reserve. This was the steroids era of the stock market — the Fed propped it up.

Will the Federal Reserve attempt to blow life into the deceased? And how long can you expect the bear’s market to run?

But the exuberant, marauding bears desecrated the corpse this morning — before the Dow’s body was cold…

Within minutes of the opening whistle… the poor Dow Jones plunged another 1,700 points into eternity.

The S&P plummeted 7%, overloading the circuits and tripping the breakers — for the second instance this week.

For another 15 minutes the markets suspended breath.

Why this morning’s fresh stampede out?

The President Fails to Inspire Confidence

Fifteen minutes after this morning’s halt, markets reopened for business. They should have remained closed…

That is, to financial crisis levels.

But dare we ask… is the worst over?

“You Likely Have not Seen Anything Yet”

“You likely have not seen anything yet,” wails Eric Parnell of Global Macro Research:

In short, you likely have not seen anything yet when it comes to today’s stock market.

After years of policy stimulus, stocks are trading at record-high valuations and bond yields are at historic lows. It is only a matter of time before reality returns to global capital markets.

Phoenix Capital’s Graham Summers, introduced here this week, argues the bulk of the berg is invisible:

Now, let’s talk about the REAL crisis that is hitting the financial system…

[Global] debt-to-GDP is north of 200%. Leverage is higher today than it was in 2007. And the world is absolutely saturated in debt on a sovereign, state, municipal, corporate and personal level.

However, everything was running smoothly as long as nothing began to blow up in the debt markets [or] credit markets.

And despite a few hiccups here and there, the debt markets have been relatively quiet for the last few years…

Someone or something is blowing up in a horrific way “behind the scenes.”

The Fed was FORCED to start providing over $100 BILLION in free money overnight back in September 2019. And even that massive amount is proving inadequate…

[Two nights ago], the Fed was forced to pump another $216 BILLION into the system.

You don’t get those kinds of demands for liquidity unless something is truly, horrifically wrong.

But we suppose that is why the Federal Reserve answered the klaxons this afternoon, dripping icy sweat…and rounded into action…

Shortly after 1 p.m., it announced it is hosing in a staggering $1.5 trillion of liquidity today and tomorrow.

Between September and December it expanded its balance sheet at a rate unseen even during the financial crisis.

But the flow was but a trickle compared to the torrent on tap: 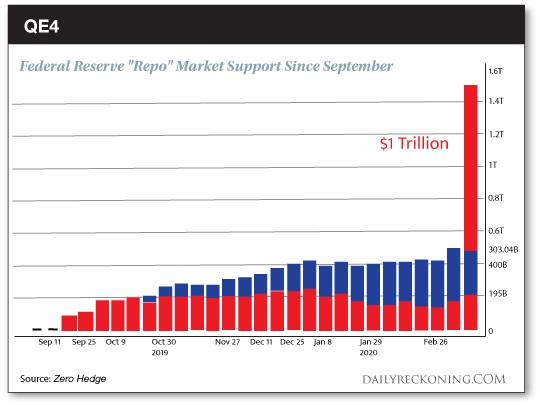 What is more, the Federal Reserve will conduct purchases across a “range of maturities.”

A full range of maturities includes longer-dated Treasuries. Thus it can no longer deny it has resumed quantitative easing…

Its purchases since September centered exclusively upon shorter-term Treasuries. Since QE targeted long-term Treasuries, it could throw out a smokescreen of deniability.

But no longer. Thus today we declare the onset of “QE4.”

The drowning stock market seized upon the life ring thrown its way. And it rapidly made good half its losses on the day.

But it began to lose its purchase on the ring, on life… and resumed its slide into depths.

The Leaders up Are Leading the Way Down

Are ruptures within the credit markets why stocks continue plunging, Mr. Summers?

This is why the markets are failing to rally. It is why every major central bank is out talking about launching new aggressive monetary policies. And it is why the Fed is privately freaking out.

Below is a chart showing [a proxy for] the credit markets (black line) relative to the stock market (red line).

As you can see, the credit market led stocks to the upside during the bull market. And it is now leading stocks to the downside. Credit is already telling us that stocks should be trading at 2,600 or even lower. 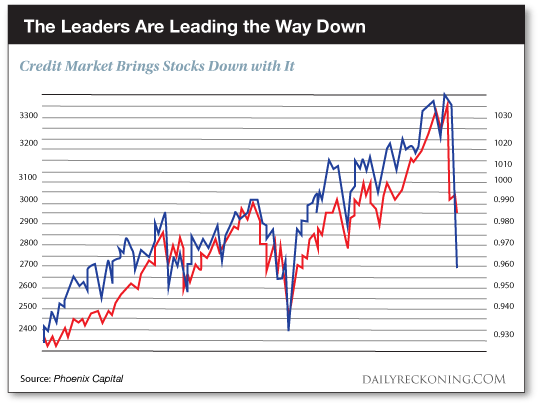 This is a real crisis. And from what I can see, the Fed can’t stop it anytime soon.

The Fed’s One Option

But if the prospect of rate cuts and additional QE cannot hold the line… does the Federal Reserve wield any options at all?

So what could stop this?

A globally mandated intervention in which the Fed and other central banks start buying corporate debt.

However, in the U.S., the Fed CANNOT buy corporate debt…

It would need authorization from Congress to do so. And from what I can tell, no one is even suggesting this.

I don’t mean to be a fear-monger, but this is a very dangerous situation.

We would have to agree. It appears a very dangerous situation.

But how long can you expect the bear’s market to endure? The answer in one moment.

But first… will the Federal Reserve actually attempt to reanimate the corpse?

The Fed Wants to End the Market’s Dependency

As our own Charles Hugh Smith claimed in a recent reckoning, it has grown fearful of the monstrous bubble it inflated.

But it did not wish to shoulder blame for draining the air out.

Thus the coronavirus has done it a great service by seizing the sharpened pin.

And it may not wish to risk blowing another bubble. Do we speculate?

The Fed has created this dependency…

The question is — do you want to feed that hunger? Keep applying that opioid of cheap and abundant money? The market is dependent on Fed largesse… and we made it that way…

But we have to consider… that we must wean the market off its dependency on a Fed put.

The question is worth considering. But how long can you expect this bear to run amok?

Here is the answer, says history:

Of course it could end sooner. But it could also end later.