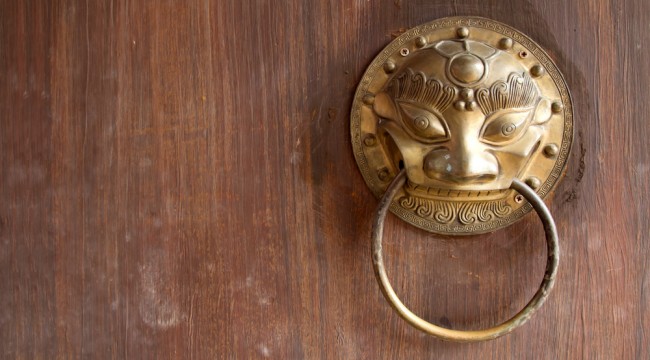 For one frightening moment, we were afraid we’d missed the biggest financial story in years.

“Claiming to have vaulted France and Italy in terms of gold reserves,” said a report last Wednesday, “China has announced that they have expanded their gold reserves by 76%, thus becoming third-largest gold reserves in the world.”

If you’ve been with us for a while, you know this is huge… if it’s true.

China’s central bank rarely declares its gold holdings. It declared 600 metric tons in 2003. The next announcement didn’t come until April 2009, when suddenly the total leaped to 1,054 metric tons. No further announcement has been forthcoming.

China’s gold accumulation has one of two aims: There’s the Chuck Butler theory and the Jim Rickards theory.

Chuck, our go-to currency expert at EverBank World Markets, believes China’s aim is a gold-backed yuan that knocks off the dollar from its perch as the world’s reserve currency. Mr. Rickards, the author of Currency Wars, believes China wants “a seat at the table” whenever the world currency system collapses and needs to be reorganized; a big gold stash gives them credibility.

“I expect the Chinese to update that official figure in, I’ll say the end of the first quarter 2014,” Rickards told us last summer, based simply on the passage of time. His estimate is roughly 4,000 metric tons, “but I have spoken to a number of sources in Asia, I’ve spoken to a number of people who are very close to the physical market, I’ve done my own investigations, etc. Every time I have an estimate and try to verify it, what I get back is that I’m wrong on the low side.”

In any event, China made no such announcement last week. Officially, at least, China is not yet the No. 3 gold holder in the world, behind the U.S. and Germany.

While the story ricocheted around the Internet, it all was traced back to a site called Scrap Monster, which tracks the world trade in scrap metal. The story was datelined Beijing and reads as if it were written by someone for whom English is not a first language, to wit: “The accurate reports released by the World Gold Council Data has placed U.S. at the first position of world ranking for holding largest gold reserves which is 8,133.5 tons.”

Nor was the story confirmed anywhere else. But for what it’s worth, the story said China’s gold holdings now total 2,710 metric tons.

If gold is a barbarous relic… why would the Chinese have 5,000 tonnes?

“China may soon announce an increase in its official gold reserve from 1,054 tons to 2,710 tons,” said a Friday story from the Shanghai Daily, citing Jeffrey Nichols, managing director of American Precious Metals Advisors.

Indeed, Mr. Nichols says just that on his own website: “It seems we will soon learn it bought a total of 654 tons in 2009 through 2011, another 388 tons in 2012 and more than 622 tons last year. Much of this has come from domestic mine production and secondary supply.” Add those figures to the existing 1,054 stash and you get slightly over 2,710.

But where do these curiously precise figures come from? Alas, Mr. Nichols’ rationale sits behind a paywall.

Still, we already know the answer…

That was Sprott’s David Franklin in our own virtual pages back on Nov. 8. Evidently, he got an early read on the Bloomberg Industries report, because the numbers didn’t show up in an actual Bloomberg News story until Jan. 10 of this year — days before the flurry of stories all citing this precise 2,710 metric ton figure.

When the moment arrives, “that should be an earthquake,” Jim Rickards told us last year. “Even the gold deniers, the gold doubters, the Nouriel Roubinis of the world are going to have to sit up and take notice. If gold is a barbarous relic, if gold has no role in the monetary system, if gold is a stupid investment — and that’s not my word, that’s their word; they say the people who invest in gold are idiots and fanatics and a lot of other less acceptable words — well, if that’s all true, why would the Chinese have 5,000 tonnes?

“The minute you think of gold and paper money side by side, or having some relationship, this is how you get to these price levels of $7,000-8,000 an ounce. They’re not made up. They’re not there to be provocative. They’re actually the math. Those are the numbers you get when you simply divide the money supply by the amount of gold in the market.”

Thickening the gold plot, we have the glacial pace at which Germany has been able to repatriate its own gold stash.

As you may recall, Germany’s central bank, the Bundesbank, asked the U.S. and France a year ago to return its gold stash. Decades ago, it made sense to keep Germany’s gold stash abroad, in case the Soviet army rushed through the Fulda Gap and launched a full-on invasion. But with the Soviet Union more than two decades in the rearview mirror, the Germans asked to have their gold back.

Three hundred metric tons of Germany’s stash is held at the New York Fed. The New York Fed said it could complete the return process… by 2020. Cue the questions about whether the gold is really in the vaults.

A year later, only 5 metric tons has actually made it back home. The Bundesbank hopes to collect another 30-50 this year. Cue more questions.

That’s not good enough for at least one member of Germany’s parliament. Philipp Missfelder belongs to Chancellor Angela Merkel’s governing coalition. Bring it all home, he says, from New York and Paris — and London too: “I encourage the Bundesbank, now also bring the gold from London and New York completely to Germany.” Well, that’s how it came out after we ran it through Google Translate.

All of this is relevant to the Zero Hour scenario our executive publisher and Daily Reckoning co-founder Addison Wiggin laid out a year ago. Assume the Western central banks like the Fed have “leased” their gold to commercial banks. Assume further those commercial banks have sold that gold to Asian buyers and it will never be seen again. That hastens the arrival of Zero Hour, when a major commodity exchange will default on a contract and settle in cash, instead of metal. At that moment, you’ll want real metal in your possession, instead of paper promises.

Until then, we’re keeping an eagle eye out for the next announcement from China…

Ed. Note: To make sure you’re prepared for whatever happens as Zero Hour approaches, be sure to read the Daily Reckoning email edition. Today’s issue – in addition to featuring expert commentary from Dave and Addison – also gave readers 4 chances to discover specific investment opportunities that will help you navigate the markets no matter what happens. It’s just a small perk of being a free subscriber to one of the industry’s leading publications. If you haven’t signed up yet, you can do so for free, right here. But act quickly. You’re next chance to discover life-changing profit opportunities is just a few hours away. Click here to sign up for FREE, right now.