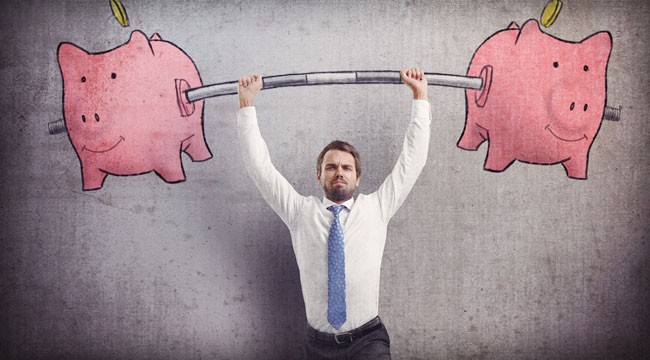 [Editor’s Note: Jim Rickards has launched a brand new monthly investment letter called Strategic Intelligence. Before you read today’s essay, please click here to see why it’s the resource every investor should have if they’re concerned about the future of the dollar.]

Not a day goes by without some pretty significant developments in the markets. You should not react or overreact in a knee jerk fashion to each piece of data that comes out.  You’ll just end up getting whipped around.

What you need to do – what analysts and investors need to do  — is have a thesis to guide them. Don’t pick one at random, but have a well thought out thesis.  Then use the data to test that thesis.  There’s a name for this: it’s called “inverse probability”. You use subsequent data to test your original idea.

That method is is different from a lot of science where you actually get a bunch of data and then you come up with an idea.  Here, however, you have an idea and you come up with data to test it.  There is no better way of approaching the markets because nobody has a crystal ball.

Our thesis has a number of elements. One of them is that there is a tug-of-war going on between inflation and deflation, which I’ve written about in these pages before (In the short-term, I believe deflation has the upper hand). That confuses a lot of people because they understand one or the other, but it’s challenging for them to keep both things in mind at the same time.

For your investment portfolio, that means taking a “barbell approach”, which means have some protection at both ends.  Have your deflation protection and your inflation protection, and some cash in the middle all at the same time because that’s the best you can do with this kind of uncertainty.

The uncertainty is caused by central bank policy.  We are in unprecedented times.

I recently had occasion to spend two hours one-on-one with one of the ultimate Fed insiders.  Sometimes, when you do these things, you agree not to mention names so, I won’t mention any names here. But this was a guy who was in the room for every FOMC vote for the past two and a half years. Nobody’s closer to Bernanke and Yellen than this individual I spoke to.

He’s a PhD economist, a very well regarded scholar but not a very well known name because he’s not actually on the FOMC. Yet he’s been invited into the room to help them figure these things out.  And what he said was that we’re not really going to know if the Fed’s policies worked as intended for another 50 years.  He said 50 years from now, there will be another young scholar like Ben Bernanke was in the 1980s who comes along and figures all this stuff out.

In other words, they’re admitting that they don’t know what they’re doing. They’re admitting this is kind of a big science experiment.  What does that mean for us as investors, portfolio managers and people trying to make smart decisions?

That’s a preface to what happened last Friday, when we had an employment report.  It was a blockbuster report; there’s no other way to describe it.  There were a lot of jobs created, there were upward revisions for prior months, so even more jobs created in November and December than we knew at the time.

Importantly, real wages went up a little bit.  Not a lot, but the fact that that time series even had a pulse is interesting.  I’ve said before that that’s one of the things Janet Yellen watches most closely because the Fed has this crazy dual mandate of creating jobs and maintaining price stability at the same time.

They’re not really consistent goals; sometimes they run together, but sometimes they pull in opposite directions.  Yellen’s been putting the emphasis on job creation, but she wants some early warning about inflation.  Seeing real wages going up is one indicator where the two wings of the plane, if you will, work together.

Because if real wages are going up, that’s a sign that slack is being reduced in the labor market. If labor can get a raise that might be an early indicator of inflation and that might mean we’re getting closer to the point where she needs to raise interest rates.  Well, real wages did actually go up a little bit, based on Friday’s data.

I’ve said a number of times – and it continues to be my view – that the Fed is not going to raise rates this year.  And yet, here comes this particular employment report and you say: hold on.  This would certainly push the Fed in the direction of raising rates when you have that kind of job creation and real wages going up.  Does that change the thesis?

I spent the better part of the weekend thinking about that because we do have to be alert to these trends.  What appears to be going on – and we’ll have to just keep watching this – is that I don’t think this very strong employment report changes the deflation picture. Deflation still has the upper hand.

Look at the oil patch, for evidence. The US rig count is down, layoffs are going up, capital expenditure plans are being cut; we can see all those things happening.

The US rig count is down, layoffs are going up, capital expenditure plans are being cut; we can see all those things happening.

Those trends are still working their way through the economy — layoffs especially. They tend to come in waves. Companies start with some layoffs, and then do more the next month, more the next month, etc, to wait and see if things turn around, which I don’t expect they will.

Compounding those problems is the big 800-pound gorilla in the deflation scenario — the currency wars.  They’re getting more and more intense.  Going back to January we saw four rate cuts: from Denmark alone, and other cuts from Canada and Australia. Go around the world and you’ll see they’re popping up everywhere.  And I think more are on the way.

I would expect another rate cut from Canada, and I think we’ll see this continue as the currency wars rage on.  And you can expect an even bigger announcement out of China.  China hasn’t cut rates since last November.  They did adjust what they call their reserve requirement ratio.

That’s sort of how much in reserves you have to hold against your loan portfolio.  They reduced it; that means with the same amount of reserves, you can expand lending.  That was meant as a form of easing.

China’s growth is still coming in below our expectations, so I would look for a rate cut there.  You still have these phenomena where every country in the world, including the ECB, is easing – quantitative easing, cutting rates, working around the edges to cheapen their currencies.  And all of that weight of adjustment is falling on the dollar, which continues to get strong, or at least maintain its strength at a very high level which is, as we’ve said before, deflationary.

But as I’ve told you before, you should be nimble and prepare for both inflation and deflation.  Your initial portfolio should have gold, fine art, raw land, cash, bonds, select stocks and some alternatives in strategies like global macro hedge funds and venture capital. Not all of those strategies will pay off in every scenario but some will do well enough to outperform others and preserve your wealth in the overall portfolio.

P.S. I track the demise of the dollar and give you actionable ways to profit along the way in my monthly newsletter, Strategic Intelligence. Click here to subscribe now.