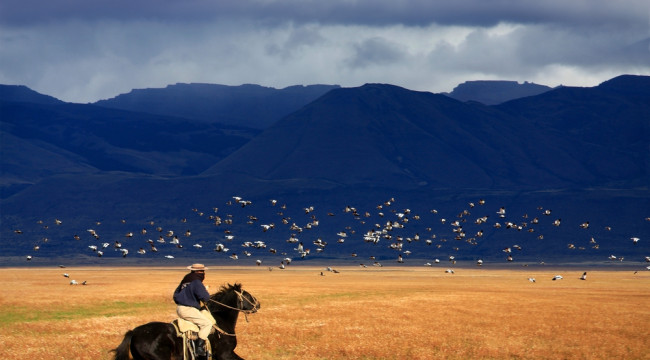 If you want to make money investing abroad, I suggest you listen to Chris Mayer.

Chris is the editor of the Capital & Crisis newsletter. He spends most of his time traveling to developed and non-developed nations in search of the next big idea. In the last five years, he’s visited over 30 countries.

I caught up with Chris this week on my S&A Investor Radio podcast. He talked about the huge long-term potential in places like China and Africa. But one of his suggestions caught me by surprise…

Chris is putting money to work in Russia.

Russia is dirt-cheap. As measured by the RTS Index (a capitalization-weighted index made up of the highest-capitalized stocks in Russia), Russian stocks trade at about six times earnings… and pay a 4% yield.

Russia is known as a tough place to do business. Last year, Russia ranked 133 out of 176 countries on the Corruption Perceptions Index. And the National Anti-Corruption Committee estimates that the cost of bribes and nepotism in Russia totals $300 billion each year.

But Chris sees a huge opportunity to make money… You see, the last time Russia traded at these valuations was in 2009. And Chris told his subscribers to buy the Market Vectors Russia Fund (RSX). RSX holds a basket of Russia’s largest companies. 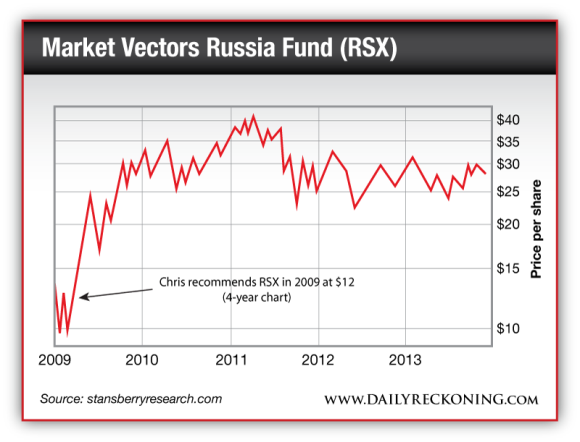 Today, Chris calls Russia “the world’s cheapest emerging market.” And he suggests investors put money back to work in RSX.

Chris believes we could see similar gains over the next 24 months buying RSX right here. More important, with the index trading at just six times earnings, the downside risk is limited.

He has one of the best track records for investing abroad. And the last time he recommended investing in Russia, his subscribers saw huge gains.

I suggest following his advice this time around. At current valuations, Russian stocks look like a steal.

Note: This was excerpted from growthstockwire.com

P.S. Chris recently wrote a book called World Right Side Up: Investing Across Six Continents – which outlines his favorite places to invest in over the next decade. You can get a copy at a 60%-plus discount – cheaper than you’ll find on Amazon – right here.

Frank Curzio, Jr. is the editor of Small Stock Specialist, an investment advisory which focuses on undervalued growth stocks with small market caps. He is also the host of Stansberry & Associates Radio.