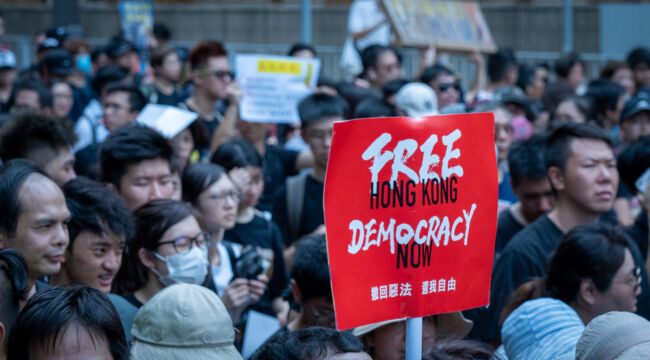 Remember the pro-democracy protests in Hong Kong against Chinese authoritarianism?

Well, guess what? They’re about to start again. And U.S.-Chinese relations could get even worse than they are right now.

Are you prepared for a bumpy ride?

Last year’s protests came in response to a proposed law that would have allowed the extradition of Hong Kong residents to Beijing for trial on charges that arose in Hong Kong.

That would have deprived Hong Kong residents of legal protections in local law and subjected prisoners to torture and summary execution.

The legislation was proposed by Hong Kong’s Chief Executive Carrie Lam, who many consider a puppet of Beijing.

The list of demands also grew to include more democracy and freedom and adherence to Hong Kong’s rule of law.

Due to social media, these protests were seen around the world.

The proposed bill behind the original protests was scrapped last October, which was a victory for the pro-democracy protesters.

The protests didn’t end altogether, but tensions were at least diffused to a great extent and the world moved on.

China’s Communist parliament is preparing to roll out legislation that would ban “treason, secession, sedition (and) subversion” in Hong Kong.

This is different from the previous legislation because this bill actually originates in Beijing, not Hong Kong. It’s a direct assault on Hong Kong’s democracy. The Chinese parliament would insert the legislation directly into Hong Kong’s constitution.

It’s scheduled for passage next week.

Pro-democracy activists have called for mass protests this weekend in response to what they rightly consider a Chinese invasion of their autonomy.

We could be in for a fresh round of protests, with as many or more people. China’s reaction will be key.

Will they try to put the protests down by force? That could have major consequences.

Yesterday, news emerged that the U.S. Senate is introducing bipartisan legislation to impose sanctions on officials and business entities that enforce the new law.

And President Trump warned yesterday that the U.S. would react “very strongly” to the Chinese legislation.

In response, China’s foreign ministry warned Beijing would “fight back” against any U.S. interference.

At a time when U.S.-Chinese relations are already at a low ebb due to China’s almost criminal handling of the coronavirus pandemic, it looks like things are about to get even worse.

This situation could become very interesting.

But you shouldn’t be surprised. The current trajectory of U.S.-China relations is following a familiar course. It started with the currency war…

When my first book, Currency Wars, was published in 2011, I made the point that currency wars don’t exist all the time, but when they emerge they can last for 15 or 20 years.

The reason is that the currency devaluations just go back and forth between major trading partners and no one is any further ahead in the long run.

Readers said, “OK, we get that, but what comes next?”

The answer is trade wars. Once currency devaluations fail, countries turn to tariffs to slow down imports and help their own exports.

That’s where the U.S. and China are now, with the ongoing trade war (which could get worse).

But that’s also a dead end from an economic perspective. Again, the question is: What comes next?

Well, with history as a guide, we can see that today’s pattern is a repeat of what the world went through in the 1920s and 1930s.

Are we heading for another shooting war with China? The signs are not good.

Trade war tariffs can be weaponized to pursue geopolitical goals. Trump is using tariffs to punish China for its criminal negligence (or worse) in connection with the spread of the Wuhan virus to the U.S. and the rest of the world.

This also has historical precedent.

Between June and August 1941, President Franklin Roosevelt placed an oil embargo on Japan and froze Japan’s accounts in U.S. banks.

In December 1941, the Japanese retaliated with the sneak attack on Pearl Harbor. Will China now escalate its retaliation to the point of armed conflict?

We’ll find out soon, possibly in the South China Sea or the Taiwan Strait. The latest reemergence of tensions in Hong Kong only adds kerosene to the fire.

Investors should prepare for U.S.-China geopolitical tension to grow worse. Maybe a lot worse. That’s the lesson of history.