The War Drums Are Growing Louder

War has existed as long as civilization (perhaps longer) and shows no signs of disappearing soon. Veterans and affected populations know the horrors of war firsthand. Even the casual student of history is acquainted with the trauma and tragedy of war.

The great irony of armed conflict is that few welcome war but it happens anyway through a complex mix of accident, ambition, revenge and escalation.

The world has been a mostly peaceful place since the end of the Cold War in 1991. Yet peace is a relative condition in a war-prone world.

Despite this litany of conflict (which could easily be expanded), the world has not recently witnessed conflict on the scale of the two world wars of the 20th century or the Napoleonic Wars of the 19th.

The urgent issue for geopolitical strategists and leaders today is whether a period of relative stability is ending.

Has the potential for a new world war risen materially? The answer is yes.

Before I lay out my case, I want to make one point clear. Just because there is evidence today that points to a material rise in the likelihood of war, it does not mean world war is imminent or inevitable.

It does mean that relations among major powers are more fraught, and the military capabilities of those major powers are receiving renewed attention. This geopolitical estimate may seem startling, but it is based on a sound methodology.

What tool do we use to formulate our estimate?

We do this with a method called inverse probability. This is based on a 203-year-old formula first discovered by Thomas Bayes. The formula looks like this when expressed mathematically:

In plain English, this formula says that by updating our initial understanding through unbiased new information, we improve our understanding.

Basically, the probability of any event can be inferred by the conditions related to that event. The power of the theory is that conditions used to estimate probability may arise after the initial probabilities were assessed. This is why it’s called “inverse probability.”

Most statistical methods start with data and end with a thesis. Our method starts with a thesis and then strengthens (or abandons) the thesis based on subsequent events.

When you have plenty of data to begin with, it’s fine to use normal statistics. But when you’re trying to solve tough problems with scarce data, our formula is the way to go. The CIA uses this method, and we use it too to hone our investment theses to find individual investments.

A basic war hypothesis can be formulated against a backdrop of U.S. weakness, Iranian hegemonic ambition, Chinese and Russian expansionism, Islamic extremism and North Korean recklessness.

What recent information has come our way that strengthens our war hypothesis?

Unfortunately, we are too well acquainted with a roster of events of this type. Terrorist attacks, tit-for-tat trade sanctions and escalating international tensions are distressingly familiar.

What strikes us as significant about these recent developments?

The tempo (numerous major developments in a two-week period) and the geographic and political breadth (these developments directly involve Russia, China, France, Turkey and Syria).

It’s a mistake to put these stories into the “business as usual” category. The timing, interconnectedness and escalatory dynamic of events look more like a prelude to wider wars than a mere series of setbacks.

We look for connections that others miss due to an overly narrow focus on one region or subject area. In this context, a highly significant event not involving geopolitics took place just two weeks before the Islamic State attacks in Paris.

On Oct. 26, the U.S. Congress and White House agreed on a two-year budget compromise that lifted the ceiling on U.S. debt. It also busted the spending caps agreed to in 2011. The acrimonious budget and debt ceiling debates of the past four years were suddenly over (at least until 2017, after the upcoming presidential election).

You have probably heard enough about the “fiscal cliff” and “shutting down the government” threats from various politicians. Now you can relax; those debates have been neutered for the next two years.

This peace treaty between Democrats and Republicans on budget and deficit issues was not without costs. Both parties had been chafing under budget caps enacted in 2011.

For fiscal years 2012, 2013 and 2014, the budget caps enacted in 2011 were a taboo subject in Washington. Neither party dared to break them. Republicans did not want to risk tea party anger by busting the caps. Democrats did not want to be painted as the party of big spenders. Both sides kept their heads down.

In late October, in a secret, backroom deal, both parties got together to bust the caps. A new Washington spending spree is about to begin in earnest.

Total U.S. spending for 2015 is approximately $3.8 trillion. Most of that government spending is on autopilot. Entitlement programs such as Social Security, Medicare and Medicaid ($2.45 trillion in total) are not affected by annual appropriations. The money is spent according to a formula that politicians do not want to change.

Interest on the national debt ($229 billion) is also automatic. It must be paid or the U.S. Treasury market goes into default. Entitlements and interest on the debt together comprise 71% of federal spending.

The part of the budget politicians fight over ($1.11 trillion) is actually just 29% of federal spending. Of that, slightly more than half is military spending and the remainder is spent on a variety of domestic programs including education, transportation, science, energy and the environment: 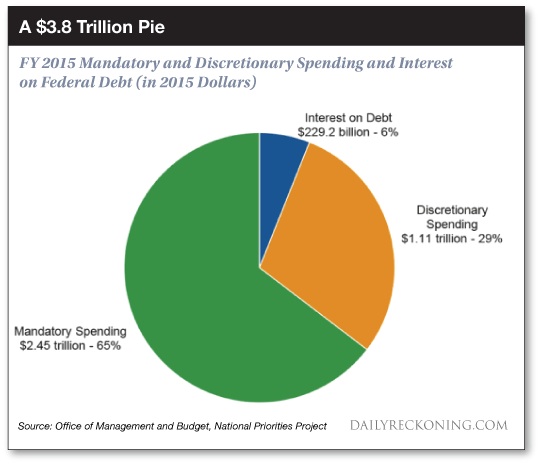 At Intelligence Triggers, it’s not our job to referee the political process or take sides in partisan debates. Voters are smart enough to do that on their own.

We are analysts, not partisans. Our role is to help you profit and preserve wealth by staying ahead of powerful trends that affect your portfolio.

Right now we see the convergence of war drums and war spending. Defense and intelligence contractors have been starved of large, discretionary appropriations for almost a decade (defense spending was being cut even before the 2011 budget caps).

Now the caps are gone and the need is pressing. It’s a new day for large firms in the defense sector and some of the niche players in national security.

No one wants war, but it’s reckless not to be prepared. In our latest Intelligence Triggers alert, we did a deep dive in the defense, intelligence and national security space and come up with an actionable investment recommendation.

We zeroed in a likely winner from a changed budgetary and security environment. Click here if you would like to learn more about the service, and access our recommendation.