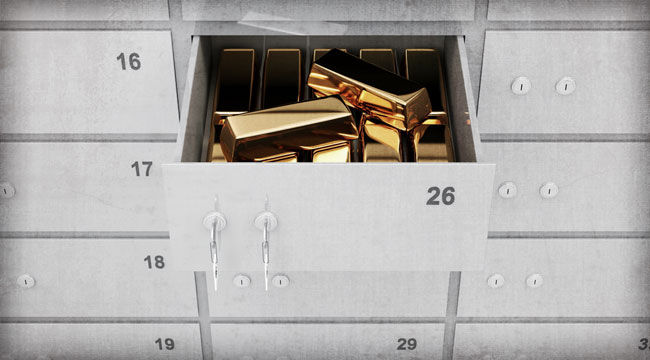 The Quickest, Easiest Way to Store Your Wealth Overseas

Since readers clamored that yesterday’s report on 3 Ways to Identify Your Own Private American Oasis didn’t protect them from domestic or foreign capital controls, like FATCA, we’ve graciously decided to rise to the challenge.

If you want to park some of your assets overseas where you’re insulated from a sinking U.S. dollar and shaky U.S. banks… and you can’t afford an army of lawyers and accountants… you have three choices.

All three of these choices are, in their own way, limiting: $10,000 isn’t a lot of money unless you have a net worth of, say, $20,000. Foreign real estate has its attractions, but liquidity — the ability to sell quickly in a pinch — isn’t one of them. And by the time you arrange to ship gold to a safe-deposit box overseas, you’ve created a paper trail that defeats the purpose of staying off the government’s radar.

That’s why we’ve long been sold on what we call OGSPs — “offshore gold savings programs.” It’s any American’s quickest, easiest route to an overseas account.

We originally published a report to our Apogee Advisory readers identifying three OGSPs.

Each will store gold for you in “allocated” form — that is, with your name on it, in specialized vaults outside the United States. Your gold won’t be mixed up with other people’s gold. You own it — the OGSP is merely storing it on your behalf.

Best of all, if you don’t own any gold right now, the OGSP will go out and buy the gold for you; all you need to do is send them the funds to get started. They do the rest.

All three of these OGSPs are worth a look, depending on your needs. But in the three years since, a new choice has emerged that we daresay for most people will be the odds-on favorite.

We’ve mentioned this new choice now and then — the Hard Assets Alliance.

The Hard Assets Alliance gives you a choice of six locations to store your metal, including four overseas — London, Melbourne, Switzerland and Singapore.

The Switzerland location is run by global gold storage leaders VIA MAT. These vaults are no longer available direct to the public. But through Hard Assets Alliance, they’re available to you.

The Singapore facility is run by the world-renowned precious metals logistics firm Malca-Amit. Ordinarily, its services are reserved for accounts with a $150,000 minimum. But as you’ll see, that’s not the with Hard Assets Alliance…

Perhaps the most appealing feature of Hard Assets Alliance is the interface of its website — it provides far and away the simplest method to buy, sell, store or even take delivery of precious metals. If you’ve gone through hassles elsewhere, you’ll find Hard Assets Alliance a refreshing departure.

Here are the particulars…

You can decide at any time to take delivery on your gold, wherever it’s stored. One phone call and it leaves the vault with 24-48 hours.

Most of the OGSPs we’ve vetted over the years do fall under the category of “foreign financial accounts” that are reportable to the IRS.

The feds left it fuzzy for a long time. But in 2011, the Treasury Department tightened the language in the regulations. And specialists we’ve consulted, like Mark Nestmann — an expert on second citizenship and international tax planning — agree that if you’re paying a custodian a fee for the safekeeping of your gold, it is reportable, and you do have to file an FBAR report.

The lone exception? If you have less than $10,000 in total “foreign financial accounts.”

We don’t think that’s the end of the world. With these critical assets overseas, they’re much harder for Uncle Sam to reach. Or at least the bureaucrats will have to clear many diplomatic, procedural, legal and regulatory hurdles they wouldn’t otherwise.

Now… the Hard Assets Alliance differs from other OGSPs in that you don’t have to file an FBAR. That’s because your account is managed by a U.S.-based company. The only paperwork you have to contend with is reporting the sale on your Form 1040 Schedule B if you sell… and Hard Assets Alliance will send you a 1099 form in the mail to help you with that.

Yes, that does mean your account might become subject to seizure by a U.S. court or agency. Hard Assets Alliance is working on offering non-U.S. accounts in the future. Until then, you do have the option of taking delivery at a foreign location of your choice if you ever start feeling jittery. One phone call, or a few mouse clicks, will set the process in motion. All such transfers usually take place within two business days.

But how big is the risk of gold confiscation, really?

We’ve been thinking long and hard on “the confiscation question” for years. After all, it’s hard to look past the precedent set in 1933, when President Franklin Roosevelt all but outlawed the private possession of gold. It wasn’t legal again until 1974.

The only way to make absolutely 100% sure your gold will stay out of Uncle Sam’s grubby mitts is to somehow arrange to buy bullion overseas and have it put in a safe-deposit box. The feds won’t know, and it’s not reportable to the IRS. Unfortunately, you then open yourself to the risk of the overseas government seizing your gold.

“Will the U.S. government confiscate gold? My answer is NO, they will not,” says Richard Russell.

Mr. Russell is the dean of the newsletter business. He turns 90 this year. He’s published his Dow Theory Letters since 1958. We take him seriously.

“How would confiscation help the U.S.?” he asks rhetorically. “If the U.S. possessed a huge hoard of gold, an extra few hundred tons of gold might boost confidence in the dollar. But I suspect that the U.S. has sold or loaned all of its gold. If I’m wrong, then let an audit show me that I’m wrong.”

We think Mr. Russell is onto something. Confiscation mattered in 1933, when the dollar was still pegged to gold and FDR sought to devalue the dollar relative to gold. Now? Not so much.

“If the U.S. confiscates anything,” Mr. Russell goes on, “it will be cash. This is what the U.S. badly needs to carry its enormous debt.”

Which brings us to the Cyprus scenario of 2013. After the capital controls came the infamous “bail-ins.” Depositors at the country’s two largest banks saw uninsured deposits — anything over 100,000 euros — forcibly converted into shares of the Bank of Cyprus.

So… You have far more to worry about if you have a bank account with more than the FDIC insurance limit of $250,000 than you do about gold confiscation.