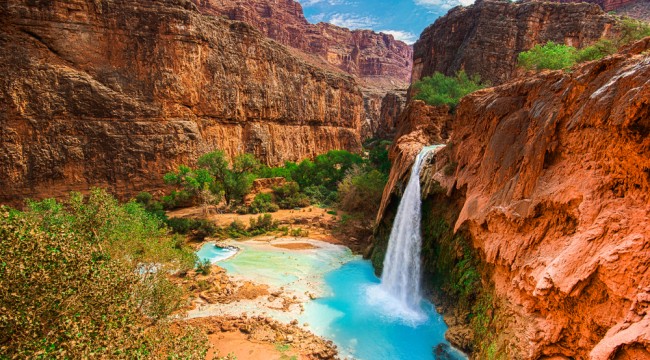 3 Ways to Identify Your Own Private American Oasis

Despite persistent rumors of an “economic recovery,” we see regular stories like this…

Then there’s the extreme case of Josephine County, Ore. — where the sheriff’s office now runs a 9-5, Monday-Friday operation. “You may want to consider relocating to an area with adequate law enforcement services,” the sheriff said.

Elsewhere, we continue to see reports of what three years ago we dubbed “new taxes and weird fees”…

Fortunately, the tsunami of municipal bankruptcies some experts anticipated this decade hasn’t come about yet. In most places, you can still call 911 and know someone will pick up on the other end of the line.

But the signs of strain are everywhere. Taxes rise as services are cut. State governments have racked up $4.19 trillion in debt.

Meanwhile, a future crisis that brings on capital controls means the federal government will start playing favorites when the firehose of money it sends to states and cities suddenly becomes a mere trickle.

With all of these factors in mind, we published a special report to our Apogee readers called American Oases.

We figured one of the first things you needed to do to prepare for a coming crisis was to find a safe place for you and your family to live and work. We spent several months researching which states are best equipped to ride out an economic storm… and which ones you want to do everything to avoid.

If you’re considering a retirement location, or if you have the flexibility to move your workplace and family out of harm’s way, knowing the five states we identified is worth your time.

We used three yardsticks to come to our conclusions. We applied each yardstick to all 50 states. Then we put it all together and identified the five states where you’ll most likely be safe, with most of your wealth intact. What follows is a brief recap and an update based on events in the last three years.

Our starting point was something we called The Debt List. How much debt has your state government racked up… and how much is it for every man, woman and child in the state?

The bond rating agency Moody’s runs these numbers every year. The rankings are little changed compared with three years ago, although in most cases, the dollar amounts are, alas, higher. 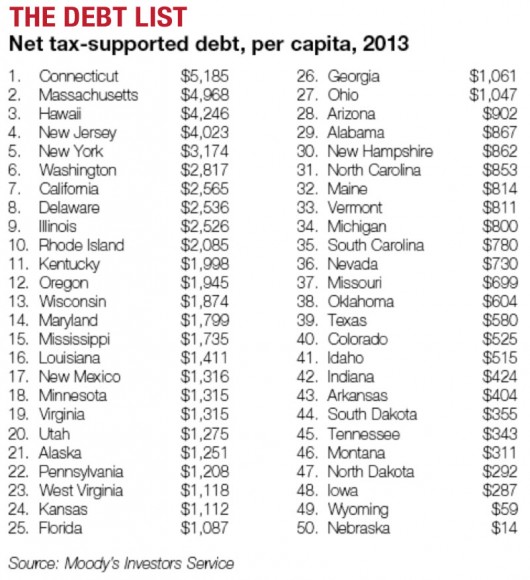 Then we considered an element we called The Handout List. It is a critical element to consider in the event of a funding crisis in Washington, D.C.

The Handout List answers this question: For every dollar a state’s taxpayers send to Washington, how much comes back in the form of federal spending? All kinds of federal spending are fair game here — grants for state programs, wages for federal employees, Social Security and Medicare payments.

Ideally, you want to be in a state where taxpayers send more money to Washington than they get back. That way when crunch time comes, it’s less likely your state government will raise taxes to make up for money lost from Uncle Sam.

Unfortunately, the most reliable version of The Handout List is getting long in the tooth. The nonpartisan Tax Foundation issued its research in 2007, based on data from 2005. Obviously, that’s a long time ago. Much has happened since, including the so-called Great Recession and the shale energy boom. Surely, the cards have been shuffled. But the Tax Foundation is still seeking funds to carry out an updated study.

Others have stepped up to make their own attempts — from The Daily Beast to the personal finance website WalletHub. Near as we can tell, the most reliable of these came from Mother Jones magazine in early 2012, using 2010 figures and applying the methodology described in the Tax Foundation’s original research. For now, it will have to do. 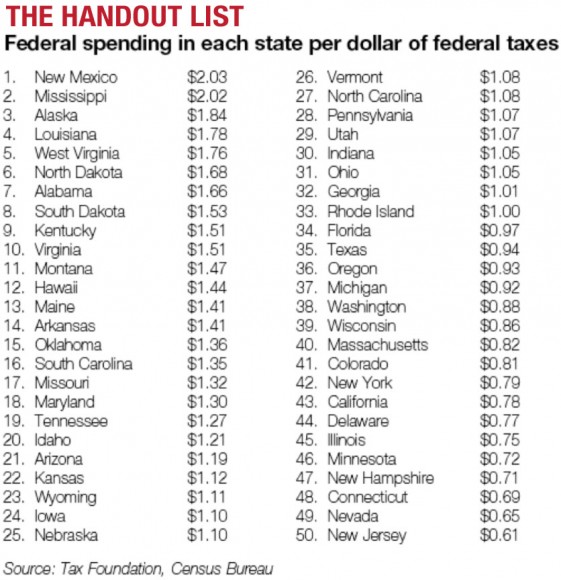 No doubt you’ve noticed many states that look good on The Debt List look bad on The Handout List and vice versa. So for a tie-breaker of sorts, we drew on a third list tallying each state’s future debt burdens for retired state employees — pensions, health care and other benefits. The Pew Center on the States calls this “the trillion-dollar gap.” Its landmark 2010 study found the 50 states have $3.35 trillion in obligations to retirees… and only $2.35 trillion on hand.

The following year, professors Joshua Rauh at Northwestern University and Robert Novy-Marx of the University of Rochester figured out how high taxes would have to rise to fully fund each state’s pension plan for the next 30 years. Then they broke it down to the annual cost per household. 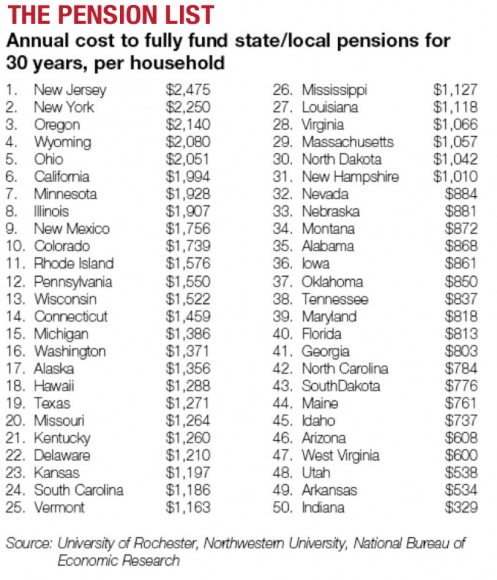 The professors have not updated their study. But we suspect, like The Debt List, the rankings are mostly similar and the numbers a little higher.

In settling on the best states, it’s not as simple as looking at the “top 10” on all three lists (actually, the bottom is where you want to look) and seeing which states turn up consistently. Not one state manages that distinction.

So we looked for the next best thing — a state that…

This is a fundamentally subjective call. And we don’t rank the American Oases, we merely present them in alphabetical order.

Our original 2011 report suggested two other states we felt were reasonably good picks overall — Florida and Wyoming. Unfortunately, both have risen in the rankings on The Handout List, Florida alarmingly so, and we can no longer include them in our best-of-the-best rankings. Before the “Great Recession,” the Sunshine State was sending more money to Washington than it got back. Now it’s right up there with a basket case like Michigan.

In other words, the events of 2007–09 have made us more choosy! That’s a good thing; the worst recession since the 1930s proved a good “test case” that helped us narrow the final cut to three states.

Of course, other states stand a reasonable chance of emerging more or less unscathed. Florida and Wyoming are still acceptable choices, as are their neighbors Georgia and Colorado. And in the end, any relocation decisions will hinge on other factors, including climate and proximity to loved ones. But the three lists give you another angle to consider.

That said… the “avoid” list of six states we put together in 2011 is still intact. Four of them might be obvious to you — California, Illinois, New Jersey and New York. Meanwhile, New Mexico performs poorly on all three lists to a degree no other state does. And Oregon is startlingly high on two of the three lists; we think it’s only a matter of time before the state imposes a sales tax.

Ed. Note: With so many ridiculous tax laws and the steadily growing debt obligations of every state, you can be sure that the feds will be coming for your money no matter what state you reside in. That’s why it’s imperative for you to discover safe, legal ways to protect and grow you wealth outside the prying eyes of the government. The FREE Daily Reckoning email edition provides readers with several opportunities to do that in every single issue. If you’re not getting the Daily Reckoning email edition, you’re not getting the full story… or any of the great opportunities that lie within. But not to worry… You can sign up for FREE, right here.