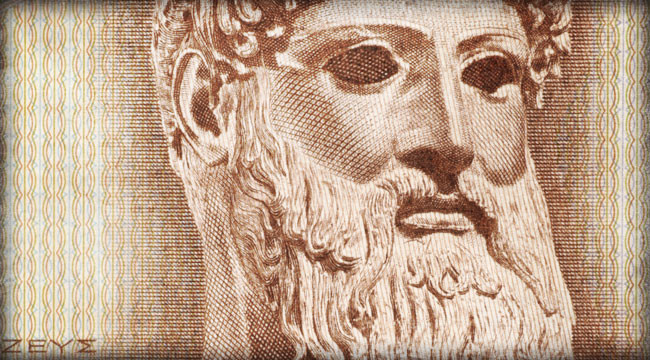 The Mythical History of Money, Credit and Gold

The standard version of how money came to be goes like this: First, there was barter. (A handful of nails for a pint of ale!) Then, along came various forms of money. An evolutionary derby eventually crowned gold and silver as the supreme money. And finally, credit (or debt) was born. This is the apex of man’s ascent from knuckle-dragging barterer to tie-wearing mortgage holder.

“Our standard account of monetary history is precisely backward,” writes David Graeber in Debt: The First 5,000 Years. “We did not begin with barter, discover money and then eventually develop credit systems. It happened precisely the other way around.”

Graeber’s book Debt came out in 2011. I didn’t pay much attention to it then. After all, who needs to read another book about debt? But Graeber is an original thinker and provides a perspective you’ve probably not seen, since Graeber is not an economist. So he draws from unfamiliar wells on the topic of money and credit.

Graeber is an anthropologist. He’s studied the record of human civilizations. It’s nothing like the economists imagine it. Graeber quotes from numerous economic textbooks to show how economists perpetuate the mythic progression of barter, money and then credit. (My own favorite, The Mystery of Banking, by Murray Rothbard, also opens with the same story.) But anthropologists have long known that the historical evidence does not support this view. It’s just that economists seem to have ignored it.

“The debt crisis was a direct result of the need to pay for bombs or, to be more precise, the vast military infrastructure required to deliver them.”

Graeber calls the barter-money-credit story “the founding myth” of economics. Instead, what really happened first was credit. In small villages and communities, trade happened on credit. Graeber presents a lot of evidence on this, which I’ll skip in the interest of space. I’ll just say it is convincing. And when you think about it, it’s hard to imagine it happening any other way. “It’s not as if anyone actually walked into the local pub,” Graeber writers, “plunked down a roofing nail and asked for a pint of beer.”

No. What happened was you ran up a tab. When the occasion permitted, you settled the debt in some way — perhaps with a bag of nails or tobacco or a chicken. All across the village, there would be numerous such “tabs” or, essentially, credits (debts) for all kinds of goods and services. People settled these debts in broadly agreed-upon ways.

“To this day,” Graeber writes, “no one has been able to locate a part of the world where the ordinary mode of economic transaction between neighbors takes the form of ‘I’ll give you 20 chickens for that cow.'”

When people resorted to barter, Graeber says, it was usually to conduct trade with strangers, or even with enemies. Barter is not even particularly ancient, but found more in modern times in societies familiar with the use of money but lacking actual currency or coinage.

“Elaborate barter systems often crop up in the wake of the collapse of national economies,” Graeber writes. Russia in the 1990s is an example, when rubles disappeared. And sometimes a kind of currency will emerge in place of the old, such as cigarettes in POW camps and prisons. But all of these are cases where people were already familiar with one form of money and learned to make do without it.

Not all economists ignored the historical record of anthropology. Graeber gives a tip of the cap to one Alfred Mitchell-Innes (1864-1950). He was a British diplomat, economist and author. While serving in the British Embassy in Washington, D.C., from 1908-1913, he wrote two essays about the origin of money and credit for The Banking Law Journal. (I’ve read these essays, which you can find online. The first is “What is Money?” and the second is “The Credit Theory of Money.”)

Mitchell-Innes laid out the fallacies in the popular story. He relied on numismatics and the commercial history of ancient and medieval societies. He showed how credit came first. The sanctity of debt spun the wheels of commerce. Coins (and money) came later.

“At this point,” Graeber writes of the time of Mitchell-Innes, “just about every aspect of the conventional story of the origins of money lay in rubble. Rarely has a historical theory been so absolutely and systematically refuted.” Yet the myth persisted.

Here, I am barely out of Chapter 2 in my summary of Debt. The book is 500-plus pages. I can’t do it justice here, but I’m going to go to one conclusion that may alter how you think about money. Graeber, though acknowledging we can’t know definitely how money came about, writes approvingly of one historical theory that says states created money to finance wars. As Graeber writes:

“Say a king wishes to support a standing army of 50,000 men. Under ancient or medieval conditions, feeding such a force was an enormous problem… On the other hand, if one simply hands out coins to soldiers and then demands that every family in the kingdom was obliged to pay one of those coins back to you [to pay taxes], one would, in one blow, turn one’s entire national economy into a vast machine for the provisioning of soldiers, since now every family, in order to get their hands on the coins, must find some way to contribute to the general effort to provide soldiers with the things they want.”

Admittedly a “cartoon” version, Graeber says that cash markets did spring up around ancient armies. The creation of a national debt, then, is essentially a war debt. A central bank is merely the institutionalization of the needs of the state and the interests of financiers to keep the whole machine going.

When Nixon took the U.S. off the gold standard in 1971, it was in part to help finance the war in Vietnam. (Think, too, about what this means for gold. It is no more “real money” than the ink-stained paper governments turn out. If this is right, gold became money only because states once stamped it and made it money and accepted it to settle debts and taxes. Otherwise, it’s just another commodity.) The U.S. debt made possible a huge military-industrial complex.

“The debt crisis was a direct result of the need to pay for bombs,” Graeber writes, “or, to be more precise, the vast military infrastructure required to deliver them.” Nixon ordered more than 4 million tons of explosives dropped on Indochina. In a sense, the U.S. military was the only thing backing the U.S. dollar — then and now.

“The U.S. debt remains,” Graeber writes, “as it has been since 1790, a war debt.” It is a debt that cannot, and will not, ever be repaid. It is simply rolled over indefinitely, until the day comes when something else supplants the U.S. dollar.

In the last chapter (“The Beginning of Something…”) Graeber concludes that we live in a new financial age, “one that nobody completely understands.” It is an age of credit. But unlike the credit of old — dependent on trust and honor — it is one based on military power and debt servitude. It is one held together by the threat of violence.

How this latest phase ends — as government debts continue to pile up — is the great financial question of our times. Graeber’s book is a thoughtful (and well-written) addition to the discussion. I enjoyed it. It challenges long-cherished assumptions and makes you think — the mark of a good book!

Ed. Note: The future of debt (especially in the U.S.) is likely to be just as interesting as its long and storied history. And 200 years from now, when the next group of anthropologists looks back on the current U.S. debt picture, they’ll probably laugh out loud at how ridiculous it is — and how anyone ever thought it was sustainable. Of course, the best thing you can do to prevent the negative effects of so much debt is to prepare your own finances before the collapse. Sign up for the Laissez Faire Today email edition, and start getting all the info you need to ensure you’re not swallowed up by the coming debt implosion.

And the Degeneracy of American Capitalism…