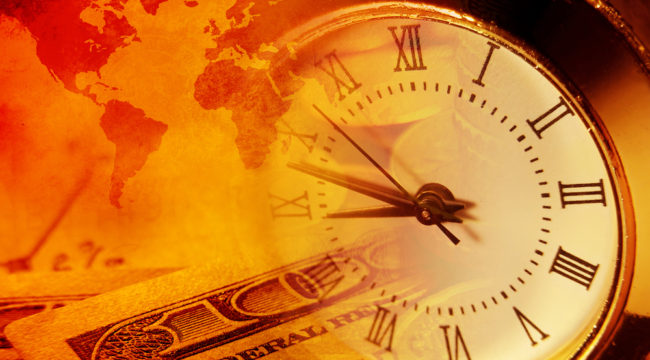 Right now, the United States is officially $20 trillion in debt. Over half of that $20 trillion was added over the past decade.

And it looks like annual deficits will be at the trillion dollar level sooner than later when projected spending is factored in.

I don’t say that to be hyperbolic. I’m not looking to scare people or attract attention to myself. It’s just an honest assessment, based on the numbers.

The debt-to-GDP ratio in that example would be 40%. But we don’t have a $50 trillion economy. We have about a $19 trillion economy, which means our debt is bigger than our economy.

When is the debt-to-GDP ratio too high? When does a country reach the point that it either turns things around or ends up like Greece?

They put the danger zone at a debt-to-GDP ratio of 90%. Once it reaches 90%, they found, a turning point arrives…

At that point, a dollar of debt yields less than a dollar of output. Debt becomes an actual drag on growth.

What is the current U.S. debt-to-GDP ratio?

We are deep into the red zone, that is. And we’re only going deeper.

The U.S. has a 105% debt to GDP ratio, trillion dollar deficits on the way, more spending on the way.

We’re getting more and more like Greece. We’re heading for a sovereign debt crisis. That’s not an opinion; it’s based on the numbers.

How do we get out of it?

For elites, there is really only one way out at this point is, and that’s inflation.

And they’re right on one point. Tax cuts won’t do it, structural changes to the economy wouldn’t do it. Both would help if done properly, but the problem is simply far too large.

There’s only one solution left, inflation.

Now, the Fed printed about $4 trillion over the past several years and we barely have had any inflation at all.

But most of the new money was given by the Fed to the banks, who turned around and parked it on deposit at the Fed to gain interest. The money never made it out into the economy, where it would produce inflation.

The bottom line is that not even money printing has worked to get inflation moving.

Is there anything left in the bag of tricks?

There is actually. The Fed could actually cause inflation in about 15 minutes if it used it.

The point is to cause a generalized increase in the price level. A rise in the price of gold from $1,350 per ounce to $5,000 per ounce is a massive devaluation of the dollar when measured in the quantity of gold that one dollar can buy.

Don’t think this is possible? It’s happened in the U.S. twice in the past 80 years.

The first time was in 1933 when President Franklin Roosevelt ordered an increase in the gold price from $20.67 per ounce to $35.00 per ounce, nearly a 75% rise in the dollar price of gold.

He did this to break the deflation of the Great Depression, and it worked. The economy grew strongly from 1934-36.

But what people don’t realize is that there’s a way gold can be used to work around a debt ceiling crisis if an agreement isn’t reached in the months ahead.

I call it the weird gold trick, and it’s never seen discussed anywhere outside of some very technical academic circles.

It may sound weird, but it actually works. Here’s how…

But we have a Fifth Amendment in this country which says the government can’t seize private property without just compensation. And despite its name, the Federal Reserve is not technically a government institution.

The Eisenhower administration actually had the same debt ceiling problem we have today. And Congress didn’t raise the debt ceiling in time. Eisenhower and his Treasury secretary realized they couldn’t pay the bills.

The Treasury calculated the difference, sent the Fed a new certificate for the difference and said, “Fed, give me the money.” It did. So the government got the money it needed from the Treasury gold until Congress increased the debt ceiling.

That ability exists today. In fact, it is exists in much a much larger form, and here’s why…

Right now, the Fed’s gold certificate values gold at $42.22 an ounce. That’s not anywhere near the market price of gold, which is about $1,330 an ounce.

I’ve done the math, and that number comes fairly close to $400 billion.

In other words, tomorrow morning the Treasury could issue the Fed a gold certificate for the 8,000 tons in Fort Knox at $1,330 an ounce and tell the Fed, “Give us the difference over $42 an ounce.”

The Treasury would have close to $400 billion out of thin air with no debt. It would not add to the debt because the Treasury already has the gold. It’s just taking an asset and marking it to market.

If the debt ceiling isn’t raised, this gold certificate trick could finance the government for almost an entire year, because we have about a $400 billion deficit.

It’s not a fantasy. It was done twice. It was done in 1934 and it was done again in 1953 by the Eisenhower administration. It could be done again. It doesn’t require legislation.

Is the government working on this gold trick I just described? I don’t know.

But it’s suspicious that Treasury Secretary Mnuchin recently went to inspect the Fort Knox gold. He was only the third Treasury secretary in history to visit Fort Knox, and the first since 1948. The visit was highly, highly unusual.

I’ll be keeping an eye on this space, but the real message is that the solutions to current debt levels are inflationary.

They involve a dollar reset, or a dollar reboot. That means revaluing the dollar either through a higher gold price or marking the gold to market and giving the government money.

There’s a lot of moving parts here, but they all point in one direction, which is higher inflation. It’s the only way to keep America from going broke. Unfortunately, it will also make your money worth less.