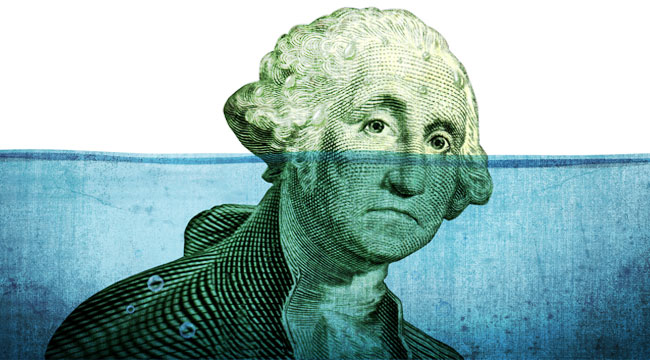 The Making of a Modern Debt Slave

In the ancient world, when people got themselves into debt, they were often forced to sell their daughters into prostitution and their sons into slavery.

More about that in a minute…

First, a quick look at the financial markets. Looks like gold might have put in a bottom.

We’ll have to wait to see. But gold is probably reacting to recent comments from the Fed. Turns out America’s central bank has no intention of tightening up on the credit markets anytime soon. The Fed will keep manning the stimulus pumps for as long as it takes to bring the economy back to “normal” growth… or until the whole thing blows up, whichever comes first.

But the recent rise in yields means credit markets are tightening. That has implications of a darker kind. It is one thing for the feds to correct their own policy mistakes… it is another for the market to force a correction upon them.

But let us return to the ancient world… and try to learn something about how a debt crisis can be resolved.

Sometimes, the weight of debt broke up families… Sometimes families fought back. Writes anthropologist David Graeber in his book Debt: The First 5,000 Years:

“For thousands of years, the struggle between rich and poor has largely taken the form of conflicts between creditors and debtors — of arguments about the rights and wrongs of interest payment, debt peonage, amnesty, repossession, restitution, the sequestering of sheep, the seizing of vineyards and selling of debtors’ children into slavery. By the same token, for the last 5,000 years, with remarkable regularity, popular insurrections have begun the same way: with ritual destruction of debt records — tablets, papyri, ledgers, whatever form they might have taken in any particular time and place.”

Pity the children. They often paid for their parents’ mistakes. Of course, the parents paid too. They suffered the dishonor and humiliation of having their children taken away and put to someone else’s service.

What has changed? Today, the U.S. lumbers into the future with total debt equal to about 350% of GDP. In Britain and Japan, the total is over 500%. Debt, remember, is the homage that the future pays to the past. It has to be carried, serviced… and paid. It has to be reckoned with… one way or another.

And the cost of carrying debt is going up! Over the last few weeks, interest rates have moved up by about 15% — an astounding increase for the sluggish debt market. How long will it be before long-term borrowing rates are back to “normal”?

At 5% interest, a debt that measures 3.5 times your revenue will cost about one-sixth of your income. Before taxes. After tax, you will have to work about one day a week to keep up with it (to say nothing of paying it off!).

That’s a heavy burden. It is especially disagreeable when someone else ran up the debt. Then you are a debt slave. That is the situation of young people today. They must face their parents’ debt. Even serfs in the Dark Ages had it better. They had to work only one day out of 10 for their lords and masters.

As it stands, young people in the U.S., Europe and Japan are expected to work their whole lives to pay for things their parents and grandparents consumed decades earlier.

But wait… it’s worse than that.

Because the unpaid burden of past consumption reduces the ability of the next generation to earn money. A friend sends this email message:

“Just watched an article on CNN regarding European youth unemployment.

“They are calling it a lost generation.

“This is the point I have been trying to make at our meetings. When you hear of the U.S. with 7.5% or 8%, it doesn’t sound horrible until you look into the numbers.

“In the U.S., the same youth category runs from 20% up to 50%, depending on education and ethnicity. Don’t know what it is in Brazil, but I’m sure it is a serious problem.

“Until this is righted with a multitude of fixes, it appears to me the youth will continue to revolt, and rightly so.

“Just imagine: four years of college, 23 years old, and a bleak future! Who wouldn’t be in a foul mood?”

In the U.S. and Europe, marriage rates have never been lower. Huffington Post reports:

Marriage, work, family — without them, a man thinks differently. Without the yoke of marriage or the traces of family, he runs amok. In China, the “bare branches” — young men who couldn’t find wives — started a revolution.

The Nien Rebellion, which took place between 1851-68, cost over 100,000 lives and almost toppled the Qing Dynasty.

Will today’s young people accept their lot… and remain in docile debt servitude their whole lives? Or will they rise up, as Mr. Graeber suggests, and burn T-bonds in public spaces… rampage down Wall Street… and perhaps hang Ben Bernanke in front of the New York Federal Reserve?

“The era of waste, fraud and living on borrowed money is dying…” The good news is that the outlines of a better world are emerging…