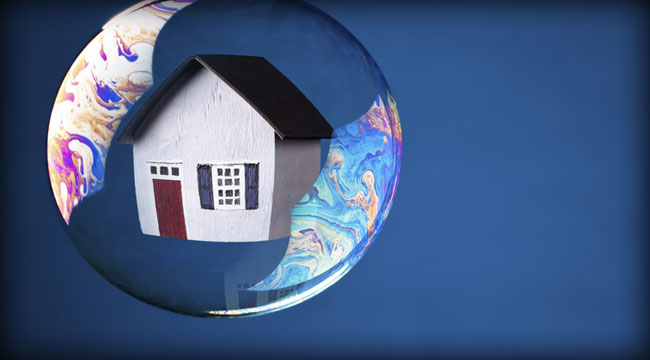 The Housing Bubble Is Inflating Again

“The greatness of America,” Alexis de Tocqueville noted in 1835, “lies not in being more enlightened than any other nation, but rather in her ability to repair her faults.”

Eh… we might take issue with that this morning. Despite a devastating housing crash and a persistent recession, house flipping is back. So too may be the housing bubble.

It looks like people haven’t learned much in the last seven years. Back in May, NPR reported on the return of house flippers, noting, “Flipping is up in some parts of Southern California by as much as 45% over last year. And in April, the region reached a milestone: Home sales hit their fastest pace in seven years.”

It isn’t just in California, though. Check this out. Year-over-year appreciation in America’s hottest bubble markets: 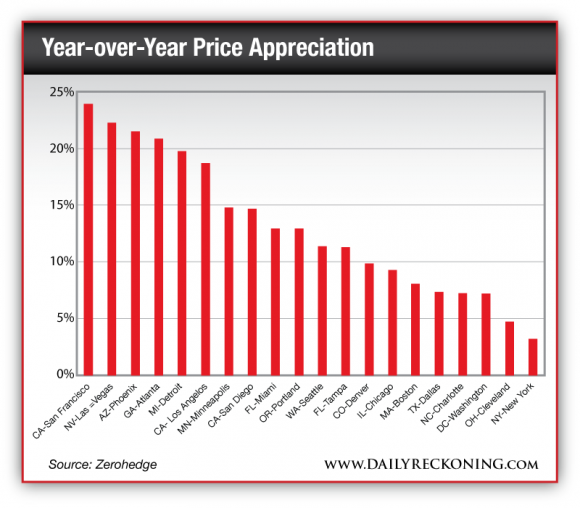 Wondering where all that new Fed liquidity is going? Wonder no longer!

Flipping houses seems to be as American as apple pie. Cable TV has never ceased celebrating house flipping, even during the crash… Flip This House on A&E ran clear through the housing crisis and has been on for eight years and Flip Men has been a recent hit for Spike. All fed by the Bernanke money machine and low-interest loans.

Nationally, housing prices continue to rise rapidly. The Case-Shiller index of new home sales rose 2.1% last month, the highest level since July 2008. Standard & Poor’s reported that existing U.S. home prices in 20 metropolitan areas were 12.1% higher in April than a year earlier, the highest such gain in the history of either index. Most economists are applauding the growth, citing the boon it’s been to recovery of the broader economy.

Of course, that was the opinion back in 2002 as well. Back around the time The Daily Reckoning began forecasting that the mortgage finance bubble would burst, Paul Krugman famously blogged: “To fight this recession, the Fed needs more than a snapback; it needs soaring household spending to offset moribund business investment. And to do that… Alan Greenspan needs to create a housing bubble…”

Mission accomplished. And we’re still not done paying the price.

P.S. Haven’t signed up for The Daily Reckoning? We cover this and much more in our email edition… Click here to subscribe!