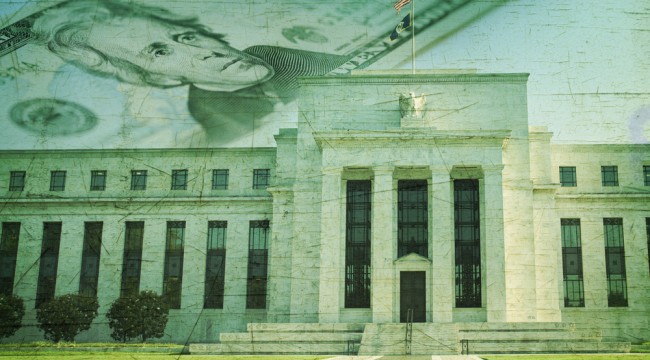 A man shipwrecked bobs along in his lifeboat…

The cruel sun cooks him. His thirst tortures him. His sufferings are doubled, tripled and quadrupled by this impossible irony:

Water, water is everywhere — yet there is scarcely a drop to drink. Salt water in any quantity would murder him.

The Federal Reserve offers a parallel example. It is the agonized wretch in the lifeboat.

It is mad for inflation. Yet inflation is lethal…

The Cry for Inflation

Jerome Powell and his crewmates cry aloud for inflation. Inflation is the spark of growth, they believe…

Inflation takes a match to the dollar. The consumer wishes to unload his dollar before the flame burns through it. Thus inflation spurs the consumer to spend.

Today’s purchases, in turn, add a figure to the gross domestic product.

A benign inflation therefore keeps an economy on the jump… and business in funds.

They will therefore postpone today’s purchases until the price falls to them.

What is the evil result of postponed purchasing?

Under extreme deflation, it may stall almost entirely.

You may relish the formidable dollar gaining strength in your wallet. This buck will give you a greater bang tomorrow.

Yet you are not an economist. You do not hear the music of the spheres. You do not realize deflation is your foe.

Deflation raises the real value of debt. A man borrows $1 today. Under deflation, he must repay perhaps $1.07 when his creditor thunders at his door.

Under inflation, the opposite dynamic obtains. The man borrows his dollar. Yet he owes merely 93 cents when his creditor knocks.

The borrower escapes with a whole skin — and a bit of blubber. Yet the creditor comes away a man reduced. He lent a dollar and received cents in return. He is the victim of a swindle.

As Jim Rickards reminded us yesterday:

Inflation decreases the real value of debt. It’s easier to pay down debt because you’re paying back debt with dollars that are less valuable than when you originally borrowed them.

The United States is the world’s largest debtor nation.

Its shoulders stoop, its back aches under a $27.8 trillion burden of debt.

Deflation stacks additional weight upon the shoulders… further encumbers the back… and buckles the knees.

Inflation, meantime, eases a man’s load. Debt’s chains weigh lighter upon him. He can get on… and move ahead.

Hence the Federal Reserve’s mania for inflation. It quickens the pace of commerce. It eases debt’s burden, public and private.

Understand this, and you understand 12 years of monetary policy. Has it failed, largely?

Yes, it has. But let it go for the moment.

Let us instead return the Federal Reserve in its lifeboat… and its lethal dilemma.

Inflation Corrodes the Value of Bonds

Assume — by some miracle of God — it gets its inflation. The fiscal authorities, as you know, are busy.

One day they may break through.

What then follows when inflation bubbles?

Years of inflation will reduce their bonds to rust.

Thus they demand a sort of boater’s insurance. That is, they demand higher bond yields to compensate them for the rusting.

The longer-dated the bond, the more compensation they demand.

Who would hold a 10-year or 30-year Treasury to term if inflation would corrode through it? Only the man with adequate insurance to guard his investment.

“Inflation Is the Water. Interest Rates Are the Salt Within It.”

The Federal Reserve is after inflation as the man in the lifeboat is after water.

The thirsting and dehydrated man cannot drink in much salt water. And the Federal Reserve cannot allow in much inflation.

Inflation is the water. Interest rates are the salt within it.

Higher interest rates are therefore lethal for an economy — and a stock market — held up by cheap money.

Rising yields… lead to rising rates, and rising rates are what kills debt-driven asset bubbles… it is essential for these debt-addicted (and failed) policy makers to keep the price (i.e. interest rates) of their debt down — which means they need to keep the yields on their bonds under “control” by keeping bond demand, and hence bond prices up.

What if the federal government cannot attract buyers of Treasury bonds? The Federal Reserve fabricates the money to purchase the bonds itself.

That is, it monetizes the debt.

This bond purchasing holds prices up… and holds bond yields… and interest rates… down.

It creates a false impression of demand.

What is the result, Mr. Piepenburg?

The artificial control (repression) of yields and rates means cheaper debt, and hence more binge borrowing (and hence price inflation) on everything from over-priced homes to over-pumped stocks driven by easy and cheap debt…

The “everything bubble” expands and expands — in stocks, in bonds, in real estate, in cryptocurrencies — in everything.

How can the Federal Reserve halt the lunatic cycle? Piepenburg:

The only options central bankers have left are bad ones.

We believe we have the answer. It is not option #2.

The show will continue until it cannot. The date is of course a mystery to us. It is on the knees of the inscrutable gods.

But the Federal Reserve has engineered a false prosperity by issuing false signals — false interest rates.

It conducts a massive and ceaseless warfare upon truth.

But time reveals truth… as noted the Roman stoic Seneca.

We fear Seneca is correct. Time in its fullness exposes truth. Here is our greater fear:

This truth will hurt… and good…