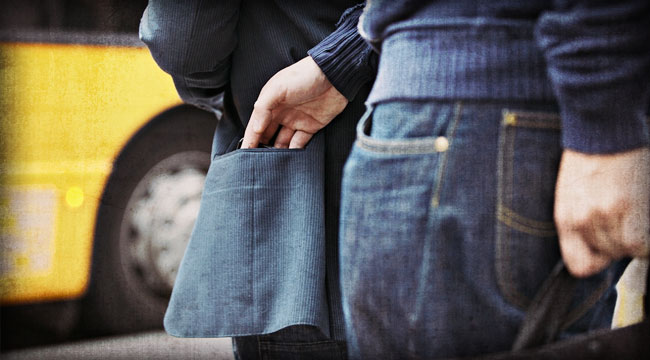 The Government's Quiet Method of Stealing Your Money

In the denouement of the film There Will Be Blood, the antihero Daniel Plainview dramatically reveals to his nemesis that he has secretly siphoned away all of the latter’s underground oil.

Through inflation (expanding the money supply), as I will show, the state and its cronies “drink our milkshake” every day. Only, it does so surreptitiously, with nary a sucking sound to be heard.

To use a favorite example of economist Murray Rothbard’s, say an “Angel Gabriel” magically multiplied everyone’s money supply tenfold overnight. Would all of society wake up richer? If so, then that’s great news, because our “angels” in the government have a similar power. Under fiat money, the quantity of money is whatever the government says it is. So if “more money” makes the whole society wealthier, the government can enrich everybody with a simple government declaration.

A loser is effectively taxed by an act of the government for the sake of the winner.

But why stop there? Not everyone can afford a private jet. So why not keep adding zeroes until everyone can? Voilà, our society will then be so rich, that we’ll all be zooming across the country every weekend.

Obviously something is wrong with this line of reasoning. When speaking to student groups, to show them what the problem is, I walk them through the following thought experiment.

I tell them to imagine that the room we are in is the whole world; that outside of it is just empty space, and that the entire world economy is contained within this lecture hall. The floorspace is the available land. The objects in front of them are all the capital goods, like tools (pencils) and factories (tables). Other objects are the consumers’ goods, like food (the doughnuts in the back), home electronics (mobile phones), and homes (other tables).

And we, the people in the lecture hall, are the economy’s population. All the resources are owned by individuals among us. And each individual owns his own body and can use it for labor.

Each individual also owns money, I tell them. “Let’s say it’s a fiat money system, and that a piece of paper at your table is your computer screen showing the balance of your money stock. And let’s say by coincidence that everyone has exactly a million dollars. So write 1 followed by six zeroes (leave out the commas).”

Now let’s inflate and see what happens, I say. “Everyone go ahead and write a zero at the end of your money balance at the same time on the count of three. One, two, three!”

Thinking about these questions makes it very clear to the students that increasing the money supply would not make society more prosperous, because it does not increase or improve the consumable and producing “stuff” available to humanity.

Then I point out that, in real life, inflation doesn’t happen that evenly. A few people get the new money first: generally privileged bankers. So I tell the students at one table that they are the privileged bankers. And then I tell only those students to add another zero to their bank balances.

I ask again, is there now more consumable or producing “stuff”? Of course, still, no. Society as a whole isn’t wealthier. But are the people at the “privileged banker” table wealthier because of the new money? There’s no denying it. They now have ten times more money than anyone else does, as well as ten times more than they themselves would have had otherwise.

But being wealthier means they can get more actual “stuff.” And if, as we’ve established, the new money didn’t create more total stuff, they can’t get more stuff, unless other people get less stuff. This government inflation (defined as an increase in the money supply), therefore, is necessarily a redistribution of wealth.

It’s a zero-sum game: a win-lose situation, unlike events in a free market, which are win-win. A loser is effectively taxed by an act of the government for the sake of the winner.

Who loses, then? Who gets less “stuff”?

At that point in the presentation, I point to a “regular,” non-banker person in the audience, and say, “Let’s say you want to buy a house. You want to buy his house,” pointing to another non-banker person. But so does one of the privileged bankers, newly flush with cash. So they competitively bid for the house.

The regular person loves the house, but is only able to pay, at most, $50,000 for it. The banker doesn’t love the house all that much. To him, it would just be an extra house for guests: no big deal. But, he’s got money burning a hole in his pocket, so, what the heck, he’ll bid $60,000 for it, which is far more than he’d pay had he not recently had such a large cash infusion. He outbids the regular person, and gets the house.

Who else won? The house-seller, of course, who got $10,000 more than he would have otherwise. The new money bid up the price of what he was selling, to his benefit. Does that mean, as the new money radiates out into the economy, that the price of what everyone sells will be bid up, and everyone will benefit?

That’s impossible, because, remember new money does not increase or improve society’s resources. It’s still a zero-sum game: a win-lose situation. So if people like the house-seller win, who commensurately loses?

Of course the government itself is among the earliest receivers, so it is one of the chief beneficiaries of inflation.

Now, what would happen if these redistributions were accomplished the usual way, through taxation and welfare disbursement (whether individual or corporate welfare)? What would happen if each of the above losers (the house auction loser, the worker who received the new money late, and the saver) were instead just sent a tax bill? And what if they all saw headlines about welfare disbursements to the winners (the privileged banker, the house-seller, and the debtor)?

The losers would be outraged, and would more likely demand that the redistribution be stopped. This is especially true, because so many of the winners from inflation are already wealthy, and hardly need the welfare. The biggest debtors include not only the government, but also highly leveraged investors, who are banking on future inflation.

The IRS, after all, is like a mugger. You see the government demanding the money and taking it (unless, of course, you’re fooled by Milton Friedman’s withholding scheme). You see the mugger’s knife, and so you’re more likely to try to defend yourself from him.

The Federal Reserve (which does the inflating), on the other hand, is more like a pickpocket. Its taxation is far more insidious. Unless you read articles like this one, you don’t even see its hand in your pocket.

The house auction loser thinks, “Aw, shucks, I got outbid and didn’t get the house. Them’s the breaks, I guess,” never imagining it’s the government’s doing.

The late-receiver of new money thinks, “Man, my wages aren’t keeping up with rent and groceries. Times sure are tough,” never imagining it’s the government’s fault (except perhaps to foolishly think the minimum wage should be higher).

The saver who is temporarily out of his contract work with a busted leg thinks, “Wow, I’m burning through my savings a lot faster than I thought I would,” never imagining the government’s role in his predicament.

This is the way the modern state gets away with abrogating prodigious amounts of society’s wealth to itself and its cronies, virtually at will. Americans are largely unfazed when subjected to acts of looting of epic proportions, like the 2008 financial bailouts, and the lavish boondoggle of blood that was the Iraq War.

Sure, they are somewhat mildly concerned that the government is perhaps wasting wealth it has already gathered from previous taxation. But, since the financing is being affected through money-printing and not regular taxation, the people have no idea how much of the enormous cost is being borne by new massive deductions from their own wealth.

It is for reasons such as these that Ludwig von Mises said that, “inflationary policy is the most radical revolutionary institution in the world.” Every day it generates new money, the Fed effects an ongoing aristocratic economic revolution, quietly siphoning wealth from the people, like Daniel Plainview with his long milkshake straw, and pumping it into the vats of a privileged elite.

Moreover, this makes us all poorer in an indirect fashion as well, by rewarding government beneficiaries at the expense of efficient producers, and by perpetuating the economically destructive business cycle.

Control over money is the state’s back-door key to the storehouse of society.

Dan Sanchez
for The Daily Reckoning

Ed. Note: Breaking down complex economic concepts like inflation to make them more understandable is one of the main goals of the FREE Laissez Faire Today newsletter. Whether it’s the unemployment rate, economic growth, or minimum wage, understanding how these aspects of the economy affect your life is crucial to your success – and can be immensely profitable if you know how to make sense of the data. Don’t miss out on these economic analyses or any of the great profit potential that comes with it. Sign up for Laissez Faire Today, for FREE, right here.

Congress and the Fed Refuse to Learn From Their Mistakes

Only when the teachings of the Austrian school are embraced by a critical mass of Americans will Congress cut warfare spending, cut welfare spending, and audit – and then end – the Fed. Ron Paul reports…

Daniel J. Sanchez directs the Mises Academy at the Mises Institute. He writes at Mises.org and DanSanchez.me.