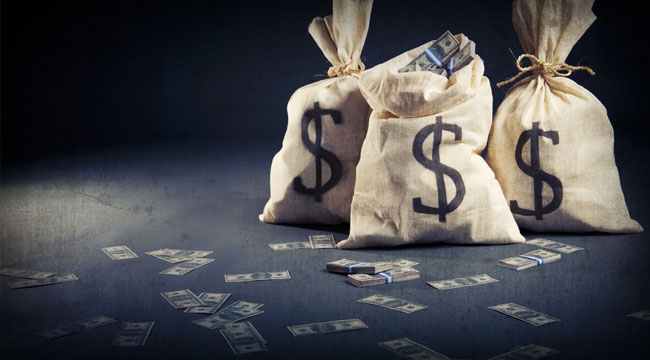 I’m about to make what I think is the biggest promise anybody in my business has ever made: I’m going to find you 100-baggers.

I know, I know… It sounds like an outrageous quest with a wildly improbable chance of success, like setting out to draw a royal flush in poker. And I would probably have agreed with you not so long ago. But then I started to dig in and study the 100-baggers of history…

Before I get to what I’ve learned, let me give you some context.

I’m working with Stephen Jones (String Advisors) to create a comprehensive study of every 100-bagger since 1962. This is a massive undertaking. My publisher has already spent $50,000 on the project. The final bill will be higher.

I’m convinced it will all be worth it.

What I’m looking for is what these stocks have in common. I want to learn how these spectacular returns came about, with an idea toward using those insights in today’s market.

Phelps’ book is out of print, but it is a gem. I’ve written about it many times before and recommended it to my readers. Recently, I was in Manhattan one evening at dinner with a reader who had read the book on my recommendation. He is a professor at The New School, where I have occasionally spoken to his graduate students. We were sitting at the rooftop restaurant Birreria. (They have great cask-aged ales there.) And he suggested I update the book.

Needless to say, I took his suggestion. My new study is an update of Phelps’ work. I also plan to write a new book around the study, called 100-Baggers. I’ll dedicate the book to the old man, Phelps. (He died in 1992 at the age of 90. He lived in Nantucket since moving from Manhattan after he retired.)

I expect to reinforce many things Phelps wrote about. I also believe we’ll uncover some new insights, since our computing horsepower vastly exceeds what was available to Phelps.

I’ll share all of what I learn over time in Capital & Crisis as we make progress on the study. At the outset, I can tell you a few things right away.

Our study, too, uncovered hundreds of stocks.

This should dispel the notion that they are impossibly rare. Phelps, early on in his book, dealt with the myth that finding 100-baggers is a futile effort. In his preface, his first line is: “This is a story — fact, not fiction — of hundreds of opportunities to make a million dollars in the stock market by investing $10,000 in one stock and holding on.”

He goes on to say that you did not need to pick the one right stock or the one right time to buy it. Starting in 1932, you could’ve bought a different stock every year for the next 35 years and multiplied your money 100-fold each time!

So timing is not essential. With our own market running high today, it is worth reiterating this point. Phelps gives us a personal example. He predicted the bear market that began in 1937. It took 7½ years for the market to get back to where it was before that bear market began.

“Yet,” Phelps writes, “I would have been much better off if instead of correctly forecasting a bear market, I had focused my attention throughout the decline on finding stocks that would turn $10,000 into a million dollars.”

They were there, every year. Tables in his book show it was so, “with painful clarity.” Phelps’ book is a warning to stay away from market timing. It is also a hymn to the powers of compounding and the virtues of sitting still.

Which is one of the second striking things about 100-baggers. You often have years to buy them. In example after example, he shows how you could’ve bought the same stock anytime during a five- or 10-year stretch and still had a 100-bagger.

It would’ve been impossible not to… if you just held on.

Think about that. You could’ve paid the 52-week high for five or 10 years running and still made 100 times your money on each purchase.

All that sweating people do over eighths and quarters, the games people play to try to save a dollar or two… it really doesn’t matter when you are hunting for 100-baggers.

Buying right is only half the meal. Holding on is the other half. Selling, then, is a confession of error. It means you made a mistake. The shorter the time you owned the stock, the more easily perceptible the error.

Still, we have to correct our mistakes. To recognize a mistake and then not do anything about it is to make it worse. So I’m not saying we sit on everything forever. But we should recognize the missed opportunity a sale represents.

“In a bull market, correcting mistakes often means taking profits,” Phelps writes. “But when we do so, let us not kid ourselves we are making money. The truth is we are acknowledging missing vastly bigger opportunities, and incurring a capital gains tax liability to boot.”

Old man Phelps set the bar high. I love it.

At bottom, there is a mathematical law to every 100-bagger. They have to compound at a high annual rate. Phelps has a table in his book that lists the returns and how many years before you get a 100-bagger:

The faster we can get a 100-bagger, the better.

But there are many ways to get there — all kinds of businesses in all kinds of industries have done it. I look forward to mapping out the pathways of these 100-baggers.

And most of all, I look forward to finding 100-baggers in the making…

The quest for the next 100-bagger logically begins with a study of the wizards who have already done it.

The Outsiders by William Thorndike profiles four of them. Recently, I got to ask Thorndike about 100-baggers in the making.

If you don’t know about his book, you should read it. He profiles eight CEOs. Four of their stocks became 100-baggers under their watch. These CEOs include Henry Singleton at Teledyne (180-bagger), Tom Murphy at Capital Cities (204-bagger) and John Malone at TCI (900-bagger). Oh, and Warren Buffett, an absurd 6,000-plus-bagger.

There are also four who don’t quite make the cut of being a 100-bagger, such as Katharine Graham at The Washington Post (89-bagger) or Bill Stiritz at Ralston Purina (52-bagger). But we won’t be too doctrinaire about this. With Stiritz, that 52-bagger took just 19 years. Imagine putting $10,000 with him and turning it into $520,000. That can save a retirement.

The point is investing with these people made you a pile of money. You didn’t even have to be around for the full ride.

The idea of the book is simply to draw out some key things these people did. And it turns out they did do some of the same things. They made great decisions about when to buy back stock, when to buy another company and so on. There is more to it than just this, but that’s the gist. In short, they were smart investors. (“Capital allocators” is the fancy phrase.)

In New York, Thorndike sat down for a Q&A moderated by William Cohan, who was an investment banker at Lazard and now writes books and shows up on TV. The New York Society of Security Analysts hosted the event.

It was definitely worthwhile.

I won’t recount the whole discussion. But I will highlight one part that will interest you. And that is his answer to my question. I asked him what CEOs and companies he thought followed the Outsiders template.

He rolled off several ideas…