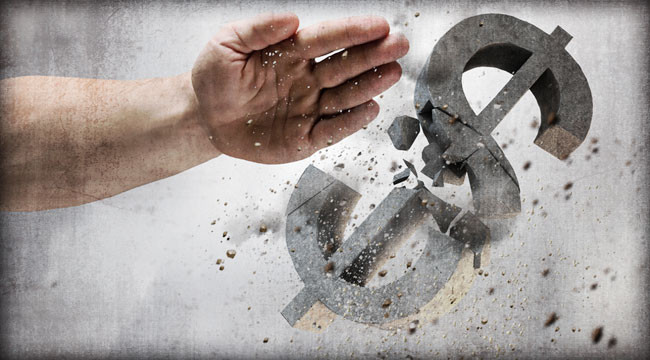 The Cure for the Broken Monetary System

Before the housing market collapsed and the government pumped billions into the economy to save it, there was a programmer named Satoshi Nakamoto. And without much fanfare, he created an idea that’s in the process of changing the world. His idea was Bitcoin.

Some background information is in order before I go any further.

Think back to 2008. Real estate was in a free fall, and the devastation was most intensely felt by the largest banks and investment firms holding mostly worthless assets in the form of mortgage-backed securities. The lame-duck Bush administration was frantically lobbying to spend $800 billion to bail out the banks.

Government cannot control Bitcoin any more than they can control algebra. It exists and it is not going away.

To achieve this implausible goal, the Bush administration, along with its counterpart in the U.K., had to whip up a kind of hysteria. Administration officials warned of a melting financial world. Banks would die, ATMs would run out of money, goods would not ship, the monetary system would break down, and the U.S. was going the way of Iceland, which, at the time, ran out of purchasable groceries.

Was it true? I never believed it. I had seen this kind of government-induced frenzy before, which the establishment was pushing through things like Homeland Security, or NAFTA, or other huge and decisive bills that met with massive public opposition. The establishment has to create an environment of fear in order to get the bill through Congress.

Looking back at those days, it seems obvious now that this was a turning point in history, a time in which it became very clear to some very smart people in the world that the government’s system of financial and monetary management was broken. If an entire system could be brought down by declining house prices, is it really robust enough to support global economic growth into the future.

Back to the faceless programmer, Satoshi Nakamoto. Around the same time, he was putting the finishing touches on his newly proposed currency, Bitcoin.

It would be created entirely out of code. It would have all the main features that we know good money has. It would be divisible, portable, durable, uniform in quality, and scarce. He chose the model of open source code: everyone could see exactly how it is made. It would live on a ledger in the Internet cloud, and the ledger would keep strict controls on creation of new units and the ownership of existing units.

There was just one problem: His newly created Bitcoin had no value whatsoever.

Nakamoto knew that if it were ever to have value, it couldn’t be imparted by the programmers. It had to come from the market itself. The proposed product appeared that January, as the new administration was taking office. You could think of this as an act of secession, a final declaration of no confidence in the existing system.

For the next eight months, it was nothing but a curiosity. A techy dream that never reached beyond the dark part of the Internet and the tiny group of genius-geeks who follow things like it. But in October 2009, something amazing happened. Bitcoin obtained a price on the market. It began to trade at about 2/10 of a penny. In other words, one U.S. cent would get you 5 Bitcoins.

How could this happen? Two crucial points help explain what happened.

First, it had proven itself to be very useful and functional. It was portable. The system was stable. The ledger in the sky called the “blockchain” worked exactly as Satoshi expected that it would.

Second, Bitcoin was scarce. Only a certain number could be created in any period of time, and the way they were created was through the hard work of computers themselves. This feature of scarcity and resource use led the market to value them.

But of course, that was all 4½ years ago. Today, Bitcoin is roaring. In the last several weeks, it has moved exponentially from $250 to peak at $900, before a huge selloff hit it again and it settled in the $700 range. But one thing many people have noticed about the latest rally. It is not following the same pattern as in the past. Each time, there seems to be a settling back to reality (whatever that is!), something stops it, and buyers step in to dominate the market.

There are a number of salient factors driving this. The myth that Bitcoin is valuable only for purchases of drugs online has been shattered. The “Amazon for narcotics” was shut down by the feds just a few weeks ago and the exchange rate of Bitcoin to the dollar did not collapse. In fact, after about 48 hours, the price had actually risen in value.

Also, China has entered the market in a huge way. Some people believe that one-third of current trading activity is coming from China, where the government has shown itself to have a very laissez faire attitude when it comes to the currency.

The congressional hearings held on Capitol Hill featured a line of administration officials warning that they are on the job to make sure that Bitcoin is not ever used for nefarious purposes.

But can these government regulators really fulfill their promises?

Bitcoin lives on a distributed network that cannot be taken down. The transactions are pseudonymous. That means you can track ownership numbers, but you can’t necessarily connect those numbers to particular people. It is not a perfect system for preserving anonymity, but it comes closer than anything that exists.

Government cannot control Bitcoin any more than they can control algebra. It exists and it is not going away. It will live forever outside the control of any state.

Satoshi proposed his system as a possible new standard for money in the Internet age. It was a wild dream and speculation. But these are times in which dreams come true. The current monetary system has been nationalized for 100 years, and it is broken down.

By their own words, the world’s central bankers and presidents have said the system is unstable and needs constant bailing out. That’s not what you want to hear from the people in charge.

Satoshi saw that it was time for something new. The market apparently agrees. Now, no matter what government does, it can’t help but inadvertently promote the use of this new medium of exchange. It has a life of its own.

Bureaucrats can complain, threaten, pronounce, and warn. But in the end, Bitcoin just doesn’t care.

Ed. Note: There’s no denying it… Bitcoin has had quite a run this year. Whether it represents the “future of money” remains to be seen. But while so many people remain perplexed by this cyber-crypto currency, the readers of Laissez Faire Today are way ahead of the curve. They’ve been clued into this, and many other stories, for a heck of a lot longer than the general public. So if you want access to the most exciting and controversial topics no one is talking about, you owe it to yourself check out Laissez Faire Tooday, for free, right here.