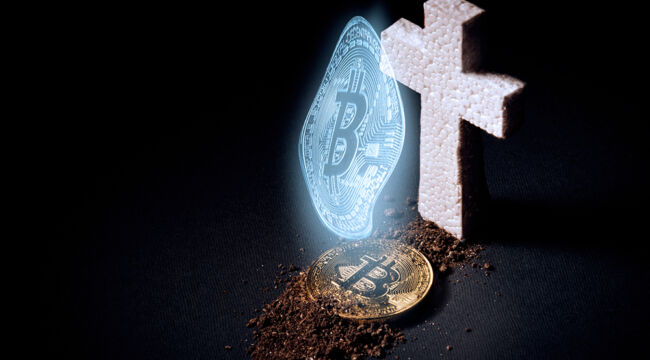 If you like roller coaster rides, then you should love Bitcoin. Bitcoin investors have been on a stomach-churning ride for the past few months.

Last Wednesday, Bitcoin suffered a single-day collapse of 30%. Then, yesterday afternoon, Bitcoin plunged sharply to $31,227, over a 50% decline since its April high.

“Never fear!” say the Bitcoin cheerleaders. Bitcoin has had many drops of that magnitude or even greater in recent years and has bounced back to new highs every time.

That’s true. So, it’s too soon to talk about the demise of Bitcoin based on a few bad weeks of price action. And it did bounce back today to over $39,000.

Why? I can’t give you a good answer. It’s just part of the ongoing roller coaster ride that is Bitcoin.

The true believers (called HODLers), who hold onto their Bitcoin through thick and thin are still around. They have been rewarded for their tenacity every time, and they believe this time will be no different.

But, Bitcoin faces many challenges.

Bitcoin Mining Is Destroying the Planet!

First off, Bitcoin is a major generator of CO2 emissions because of the energy used in mining. Now, I don’t consider that some great environmental threat because CO2 is a harmless trace gas that plants need to survive. There’s no real science to support the alarmist claims that it’s a threat to the climate.

But climate alarmism is rampant in policy circles so you can expect a crackdown on Bitcoin mining. The largest amount of Bitcoin mining takes place in China, and news out today says China will likely ban all Bitcoin mining soon.

China has also recently banned Bitcoin payments (I’m sure China is far more concerned about Bitcoin’s challenge to the digital yuan it’s preparing to launch than it is about the environment).

Incidentally, Turkey has also banned Bitcoin payments. However, Bitcoin’s supposed environmental challenge is not the only obstacle it faces. Here are some more:

Also, Bitcoin is not a good medium of exchange because it’s slow, clunky and expensive to transact. It has little real-world use, aside from setting illegal transactions on the black market and supporting terrorism.

But none of this means anything to the Bitcoin groupies. Any swoon is just another opportunity to “buy the dip.” It’s been a successful strategy, to be sure. But it works until it doesn’t.

Yes, Bitcoin came back. But it took a long time, and many people got crushed. If you bought at the bottom in December 2018, congratulations. But that’s some dip.

It’s a safe bet that Bitcoin is going to crash again.

Based Almost Entirely on Fraud

As I‘ve explained before, the Bitcoin bubble is based almost entirely on fraud. Therefore, when this bubble bursts, the damage may be so great that the value of Bitcoin could fall to $10,000 or lower. It could even disappear entirely.

Here’s a reminder of how the fraud works, as described in a recent legal notice from the New York State Attorney General…

Bitfinex and Tether paid an $18.5 million fine and pledged to provide quarterly breakdowns of its reserves.

Less than two weeks ago, Tether released the composition of its reserves for the first time in order to comply with the settlement.

Tether claims that its reserves are in cash, cash equivalents or other short-term deposits. The rest are in secured loans, corporate bonds and other investments.

But as Coindesk notes, “the first category is mostly made up of commercial paper, a form of corporate debt that can be easily converted to cash – or not, depending on the issuer and market conditions.”

Tether has claimed that its dollar reserves are held in a Bahamian bank named Deltec Bank & Trust. But independent research revealed that the assets claimed by Tether exceed the total U.S. dollar assets of the entire Bahamian banking system.

Other research has shown that those who buy Tether use them overwhelmingly to buy Bitcoin from unregulated crypto-exchanges based in Africa and Asia. These exchanges offer leverage and often award “free” Tether coins for those who bring in new customers.

These Tethers have been used to bid up the price of Bitcoin and create a bubble.

If this process were to reverse, which it inevitably will, the Bitcoin values would collapse quickly (because of leverage), and Tether would be unable to redeem retreating Bitcoin investors (because of the unaccounted-for liquid assets).

This is not just a spectator sport for prudent investors.

If that’s not enough, now there’s a new threat on the Bitcoin horizon.

The IRS Closes In

The Biden administration is working on major new tax legislation to go along with its multi-trillion deficit spending plans.

Part of this new legislation is an appropriation of $80 billion for IRS tax enforcement, including the hiring of thousands of new IRS agents to conduct audits and spot tax evasion.

Buried in the specifics of that proposal is a new regulation that would require reporting to the IRS of all transactions in Bitcoin over $10,000.

Such regulations already exist if you withdraw or deposit cash from a bank. But now they’ll apply to Bitcoin.

One by one, central banks and tax authorities around the world are zeroing in on Bitcoin in an effort to tax it, regulate it or ban it outright.

This effort will take time. But the efforts of countries around the world may do more to limit the appeal of Bitcoin than all the memes and narratives supporting it, combined.

I would advise you to stay far away from Bitcoin. Sadly, some people never learn. And many will probably get burned all over again.

And of course, they should buy gold, which has a proven track record going back thousands of years.

The fanboys can’t say the same for Bitcoin.